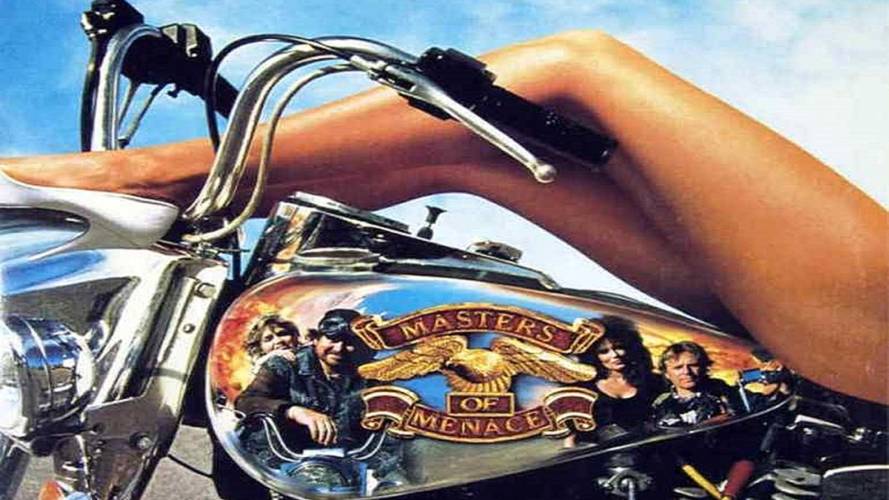 If you have ever wanted a movie that was equal parts biker B-movie, and equal parts goofy comedy, this is the movie for you. Masters of Menace stars some of the less talented members of the Second City Comedy team, and Daisy Duke herself, Catherine Bach.

The plot of this biker farce is hard to follow. In fact, it plays out like the 30-minute pilot to a failed TV show, that then had another hour of story tacked onto it. You can see that it was probably sold as "Animal House, but with bikers" but it falls short in the comedy department. Plus, there is something OK about college kids acting up and doing awful things, that isn't OK when 30- and 40-year-old men do it.

plays Buddy, the leader of a gang called the Roadmasters, whom I would expect to cruise around in Buicks instead of ride Harleys. The gang is getting older, but still partying hard, though his old lady Kitty (Catherine Bach) wonders if it isn't time for him to settle down.

At the party celebrating not going to jail, Gypsy (Jim Belushi) dies while testing his experimental top fuel drag bike, drunk, on the street, at night. Buddy decides, even though the whole gang is on probation, they have to ride out and deliver Gypsy back to his home town of Cincinnati. The gang takes off with their straight-laced lawyer in tow, and the overzealous district attorney hot on their trail.

As I mentioned, a lot of the people involved in this movie are alums of the Second City Comedy Troupe out of Chicago. Because of that, recognizable comedy talent, such as Jim Belushi, play bit parts as favors to their alma mater.

David Lander, Squiggy from "Laverne and Shirley," plays an accident-prone biker named Squirt who doesn't have a driver's license.

John Candy plays a beer truck driver who gets hijacked by the gang, because these bikers drink a lot of beer.

, Norm from "Cheers," has a small role as the sidekick, and chiropractor who takes care of a daredevil motorcycle jumper.

as the motorcycle daredevil himself. It should be mentioned here that Dan is possibly the only member of the cast who actually owns a motorcycle and rides it.

Don't be fooled if you should see this poster, these people have tiny little parts. These are not the stars of the show.

Rotten Tomato Rating: None, but it gets a 68-percent audience score. However, this may be skewed by the fact that it is somewhat of a cult film. It only scores 5.5 out of 10 on Internet Movie Database.

Redeeming Quality: If you are a male in your 40s, and grew up in love with Daisy Duke, then you are going to want to watch just to see her again.

The bear. The scene with the bear is the funniest thing in the movie. I have a feeling in the original script these bikers were doing other mind altering drugs besides beer, but it got tamed by studio executives. How else do you explain a talking bear in the woods who gives everyone sage life advice?

Worth Noting: This movie is rated PG-13, and I can only imagine it is because of the amount of beer drinking they do. The violence and sexuality is tame enough for broadcast TV. There is a scene set in a strip club, but everyone is wearing more then you see at a public beach. So, don't be afraid to show it to your kids, the juvenile humor ought to go over well with them. I suspect taming the movie down for the lower rating may be why it isn't very funny now.