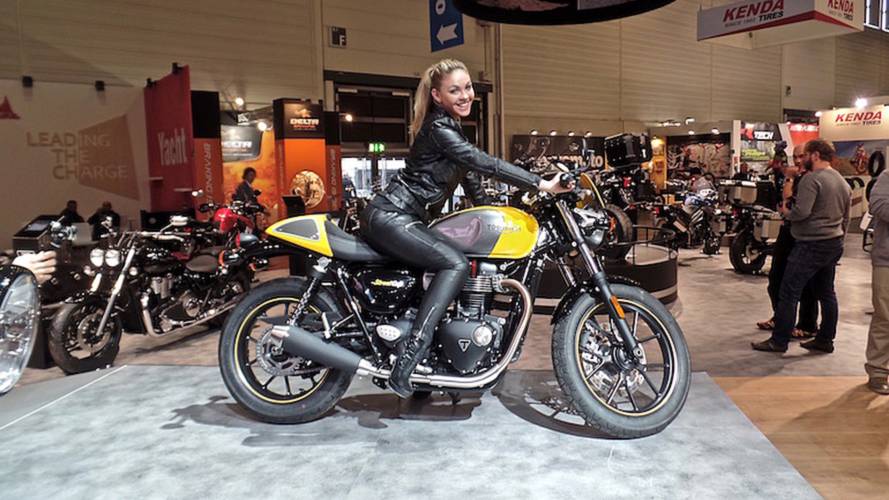 A look at all the bikes released at Intermot 2016

With leaves changing color in the Northern Hemisphere and temperatures beginning to dip, many motorcyclists find their thoughts turning to winter – some are even considering packing away their bikes for the season. To give us hope through the cold, dark months, a number of motorcycle shows take place around this time of year. One of the first, Intermot, took place in Cologne, Germany, earlier this week.

Only held every other year, Intermot is a particularly special (and busy!) show where manufacturers like to compete against one another to see who can show off the latest and greatest two-wheeled wonder. Certainly this year was no exception. But with all the fireworks and dancing girls and ear-splitting music and hyperbole and bratwurst coming so thick and fast, it can be easy for some models to get lost in the fray.

RideApart reported on roughly two dozen new or revamped models this week, so it wouldn't surprise us if you missed the news on one or two reveals. So, in easy alphabetical order and with pictures taken from the event itself, here's a recap of all that took place.

Piaggio-owned Aprilia didn't make a huge mark at Intermot. That's a statement that held true for all of the Italian company's brands, which makes us think it may be saving its best for next month's EICMA event, which will be held on home turf: in Milan, Italy.

That all said, the sport-focused brand announced updates for the RSV4 and Tuono V4 1100.

On home turf and proudly delivering the whole of its press conference in German (everyone else chose the medium of English, which is the lingua franca of Europe these days), BMW pulled the cover off an updated K 1600 GT that is now packed with so many intelligent electronic features it could autonomously run a small city.

The Bavarian company also announced even more minor tweaks to a number of other existing models, including the S1000 R, S 1000 RR, and S 1000 XR.

But perhaps of bigger interest to some of the RideApart team (including yours truly) was the further expansion of the R nineT format in the form of the übersexy Racer and entry-level-focused Pure. These bikes come in addition to the existing R nineT and R nineT Scrambler, the latter of which RideApart got a chance to ride this week – expect a First Ride report very soon.

Ducati CEO Claudio Domenicali made a surprise appearance at Intermot for the unveiling of the new SuperSport and SuperSport S, which added a sense of real occasion to the... uhm... occasion. Ducati faithful had known about the bike since July when it was revealed at a fan-only event, but even so it drew oohs and aahs from the crowd in Germany.

Like Piaggio, however, it seems Ducati was eager to hold off on showing all its cards until next month's EICMA. Don't be surprised to see a flock of new Scrambler models being introduced there, and possibly a mid-size version of the Multistrada – something we've dubbed the "Ministrada."

The big news for Big Red was the unveiling of an overhauled CBR1000RR SP Fireblade. For many sportbike riders the mere mention of a Fireblade turns them into something resembling a swooning antebellum Southern belle, so Honda had to get it right. On the surface, it looks like the Japanese manufacturer has hit the mark, but we won't know until we get to throw a leg over the thing. RideApart Sportbike Editor Bruce Speedman is licking his chops...

Somewhat lost as a result of all the Fireblade hubbub (in the press conference they appeared to literally set fire to the CBR1000RR SP) was the revealing of a tweaked and expanded CB1100 line-up. The retro-styled CB1100 has been with us for a few years and has quietly undergone a handful of changes while Honda has tried to work out exactly what it is people want in a retro bike.

It appears Honda has now adopted the philosophy that a retro bike should be gorgeous, and as such has put a lot of effort into making the new CB1100EX and CB1100RS bikes that you can't stop looking at. In my opinion, the sportier CB1100RS was quietly the bike of the show – the thing I walked away most excited about, most eager to get a chance to ride.

Kawasaki unveiled four new models at Intermot, but our friends at Kawasaki USA are being a bit cagey about which of those models will actually show up stateside. They promise to reveal all in mid-November – a week after EICMA. Folks in Europe, at least, will soon be able to get their hands on the ultra-exclusive Ninja H2 Carbon (apparently only 120 are being made), the Ninja ZX-10RR, the updated Z1000 SX, and the all-new Ninja 650.

The Z1000SX has been one of the most popular bikes for Kawasaki in Europe, even in the face of the incredible popularity of adventure-styled bikes. Meanwhile, the Ninja 650 is almost certain to draw a big fan base.

Kawasaki has promised several more models will be revealed at EICMA.

A few years ago, KTM introduced the 1050 Adventure for the European market and the thing promptly flopped. The 1050 was woefully overpriced and created confusion for buyers, with KTM offering a 1050, 1190, and 1290 version of effectively the same machine.

For those who want an offroad-ready hell beast, KTM has also introduced the 160hp 1290 Super Adventure R.

I'll be honest that Taiwan-based Kymco isn't really a company that's ever been on my radar. But the company's massive display area at Intermot, its press presentation that included a team of dancers shaking their things to the entirety of Justin Timberlake's "Can't Stop the Feeling," and the huge throng of very pushy moto-journalists suggests that it must be a big deal somewhere.

Kymco introduced a "super touring" scooter in the form of the AK 550.

In my video diary before Intermot I expressed hope that Moto Guzzi would be pulling the cover off some amazing things. Instead we got a blinged-up version of the Audace. Here's hoping that EICMA will deliver a few surprises from the beloved Italian brand.

Suzuki told us last year we'd be getting a new GSX-R1000R, but that didn't stop the Japanese manufacturer from setting off a few fireworks when the time came to officially reveal the bike it refers to as "The King." Suzuki suffered tremendously in the Great Recession and it's clear the company is hoping this reworked Gixxer will restore former glory.

For European wannabes, the company also introduced a GSX-R125, which is far better looking than most 125 bikes currently on the market (in Europe, 125cc bikes are primarily used by commuters and teenagers – neither group having much desire to spend a lot of money).

Meanwhile, following on the success of the GSX-S1000, Suzuki has introduced a little sibling of sorts: the GSX-S750. It looks identical to its 1000cc doppleganger, a trick that Suzuki has decided to also employ in its V-Strom line-up.

From 2017, the stalwart V-Strom 650 will look almost exactly like the 1000cc version. Both the Big-Strom and the Wee-Strom will be available in XT versions that appear to consist of little more than the same bikes with tubeless spoked wheels. The Big Strom, meanwhile gets a brakes overhaul, with a Motion Track Brake System that should mean being able to hit the brakes mid-corner, and a combined brake system that's activated when a rider squeezes the front brake lever.

Sadly, no cruise control – a feature that, as a V-Strom 1000 owner, I would have really liked to see.

There was a time – we're talking a decade or so ago – when Triumph kind of wanted to distance itself from the Bonneville and the idea of its producing "classic" bikes. That time is over; Triumph has embraced its destiny and is clearly placing its chips on the Bonnie line when looking toward the future.

The Street Cup name is ridiculous, by the way. I defy anyone to say the phrase "Street Cup" and make it sound cool. Fortunately, the coolness of the bike itself makes up for it; we at RideApart are particularly eager to get a chance to ride this thing.

One girl one Street Cup

Meanwhile, we're still expecting a few other new models to be coming from Yamaha in the next month or so.