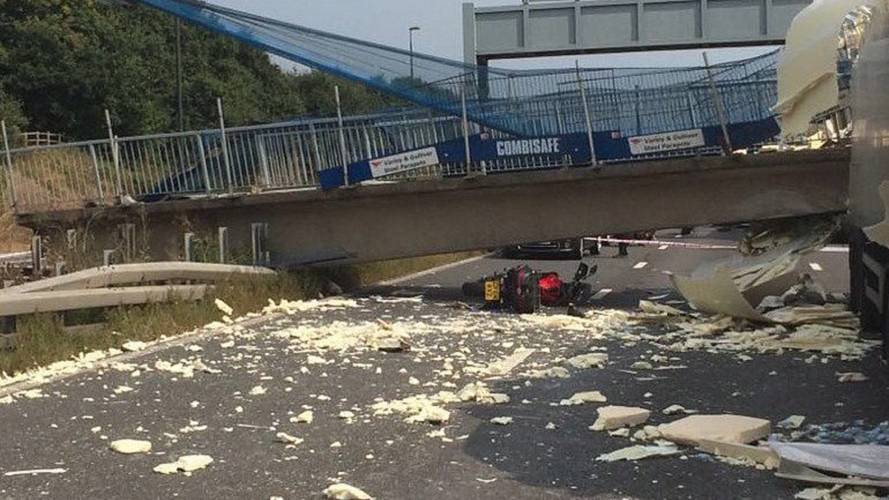 A motorcyclist on England's M20 motorway demonstrates the one time when it's a good idea to "lay 'er down."

The One Time it was Good Idea to Lay ‘Er Down

If you’ve been around motorcycles for a while it’s a good bet you’ll have encountered a rider who claimed to have had to “lay ‘er down” – deliberately crashing his or her bike on the theory that doing so helped to avoid more serious injury.

Generally, of course, this is an idiot theory. With the bike upright you at least have the opportunity to apply the brakes, or swerve, or, on very rare occasion, ride over/through an obstacle. Throw yourself from the vehicle, however, and you simply become a moving object with little to no control over where you end up.

Ask any advanced riding coach in the land and he or she will tell you that the “lay ‘er down” technique only makes sense in movies. However, this past weekend, a rider in England may have finally had a legitimate reason for doing it: to avoid a collapsing bridge.

It happened on the M20 motorway (freeway, in American lingo), south of London. A semi-truck carrying a large excavator struck a pedestrian bridge, causing it to collapse onto another truck following behind. At that same moment, a motorcyclist was riding alongside the second truck – so close to the incident that one witness said she initially thought the bridge had fallen on top of him.

But, in fact, according to other witnesses, he had just a split second to throw himself from his bike and slide underneath a small space between the fallen bridge and the roadway. His bike apparently hit the bridge and came to an immediate and unhappy stop, while he slid several feet down the motorway.

The rider was treated for broken or bruised ribs (news reports are conflicting on that point) but is otherwise expected to make a full recovery. No mention of gear was made in news items about the incident, but we’re guessing that if he only sustained rib injuries (it’s likely he would have been travelling upward of 70 mph when the incident happened) he would have been pretty well geared up.

We wish him a speedy recovery and commend him on now having a really bad-ass tale to tell.