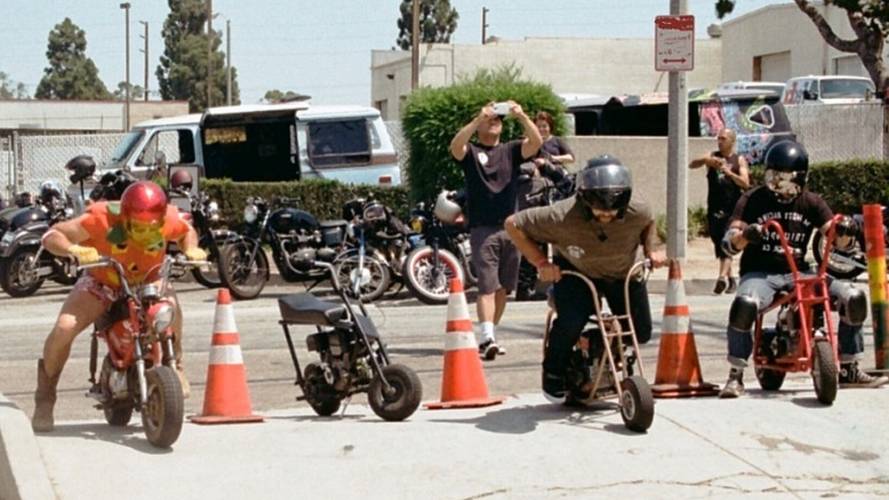 The World Outlaw Minibike Championship has been going on for about a decade now, the word "outlaw" being a clue as to both its legality and how many people know about it. Usually, it's just a case of hearing whispers after the fact, but this year I learned about it far enough in advance to be able to attend.

At a nondescript industrial park in Southern California, near the airport, a minibike road course was laid out, and the Outlaw Minibike Champion of the World was determined. I was allowed to report on it, as long as I did not give too many details about the location – or the people who put it on, to prevent embarrassment.

The race course is unique. A modified, peanut-shaped oval is constructed by adding chicanes in the middle of the two straights. In order to even things out between the dirt-oriented pit bikes, and the more street-oriented pocket bikes, scooters, and pull starts, a small jump allows a rider to take an inside line and avoid a corner if his or her bike (or courage) is conducive to jumping.

Another unique feature of the track is the watering and grooming. It is just too small for a water truck, and due to there being no hose spigots nearby, or maybe the drought, the track is kept wet for optimum traction by a large group of volunteers. These helpful folks bring water from home, and continually use it to keep things wet, by throwing water balloons at the riders from the infield viewing platform.

Entrants are divided into qualifying heats based on bike style: Pull-start traditional minibikes, pit bikes, scooters/mopeds, and the one lone weirdo on a Yamaha Tri-Zinger. Then at the end, all the fastest bikes from each class run together for a run-what-you-brung free-for-all that determines the overall winner. Women can enter any class of course, but there is also a special ladies-only class to determine the Worldwide Female Minibike Champion of the World.

The event was going along drama- and injury-free for the most part, all until the final event. In a bid to gain the upper hand over the overall clad rider from Assol Engineering, the Midnight Pumpkin rider caused a four-bike pile up before the race had even started. You could tell the pressure was getting to even these steely-eyed competitors, with everyone desperate to win and defray the dozens of dollars spent preparing these bikes.

In the end, though, even with the penalties applied for his dirty tricks, it was the pumpkin man who prevailed. Though he did not win the final race outright, his accumulated points won on various bikes in various classes in the heat races pushed him over the top. The mystery gourd proved extremely versatile, riding a Yamaha Chappy scooter, a Suzuki RM mini dirt bike, and a pull-start mini over the course of the day, all equally well.

On the women's side of the scoreboard, it was mirrored bubble disco helmet by a mile, on the Chappy scooter. There really was no contest there. While some of the other ladies seemed to have come to spectate, and got roped into riding, disco helmet was fully prepared, in leathers, with a professional-grade race face.

There is no telling if and when the next minibike championship will be held. There was buzz around the pits about it getting too commercial, and all the sport having gone out of it, and some of the bikes costing $1,000 or more. You can trust, dear reader, that I will keep my ear to the ground for the sound of a thundering pack of Briggs and Stratton engines, and bring you a report.

There is even talk of putting together a pull-start hybrid with a Yamaha HT-1 frame I have stashed away and fielding a team RideApart next race. The field was desperately short of moto-journalists, as evidenced by it being an injury-free event.

There are lots more pictures if you want to see them. I created a gallery and dumped them here.