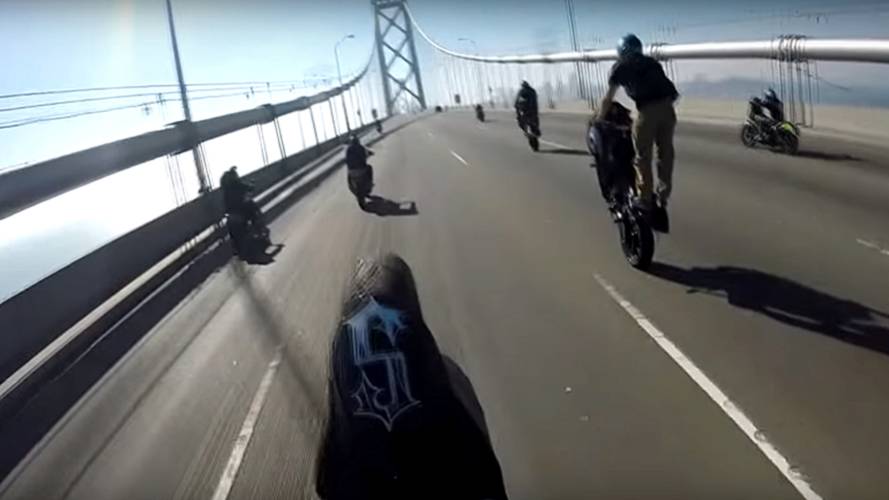 The San Francisco Chronicle reported weekend sideshows on the Golden Gate and Bay bridges involving hordes of motorcyclists doing wheelies and spinning doughnuts created a major headache for the California Highway Patrol and drivers who were slowed down by the illegal stunts. Check out the CBS 5 News coverage in the video below.

“Police got calls throughout Saturday about a large group of motorcyclists riding on and off the Bay Bridge, said Officer Vu Williams, a CHP spokesman. Around 3 p.m., officers went to the bridge after riders on dirt bikes and street bikes were seen engaging in the reckless behavior. One motorcyclist crashed into several vehicles. The rider was ejected from the bike as it became disabled and burst into flames, Williams said. The man tried to run away but was apprehended. It wasn’t immediately clear to whether he was associated with the larger crowd.

On Sunday a group of riders went onto the Golden Gate Bridge. Witnesses reported seeing some of the bikers popping wheelies or doing hand stands as they rode. Police are looking into whether it was the same group as the day before, said Officer Andrew Barclay, another CHP spokesman.

“The group rode north across the bridge, got off, then got back on the iconic span going south, police said. Barclay said the last sideshow event he could remember on the Golden Gate Bridge was in 2014. ‘Obviously it’s extremely unsafe, especially on the Golden Gate Bridge, where you have pedestrians,’ he said. ‘To have amateurs doing this type of exhibition is extremely dangerous.’”