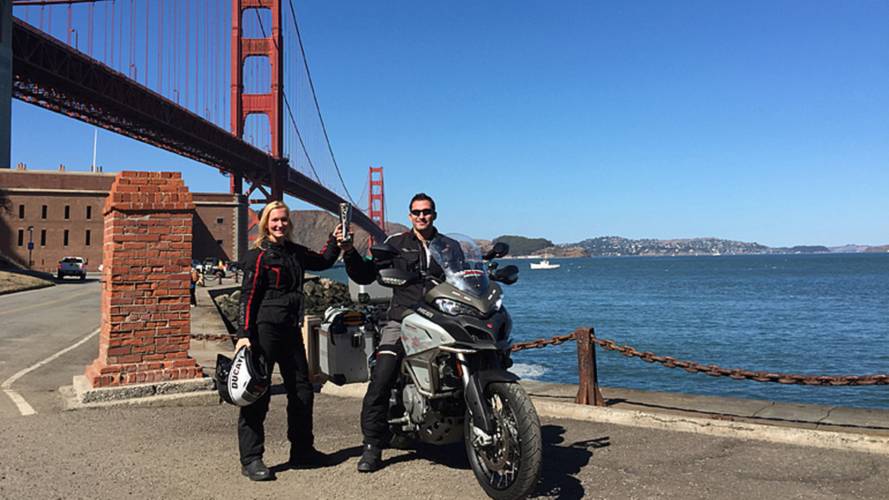 Ducati Globetrotter Jessica Leyne has finished her leg of the around the world journey for Ducati to commemorate its 90th Anniversary.

Back in July Ducati picked seven riders from 3000 applicants to mark its 90th anniversary by riding a Multistrada 1200 Enduro around the world. Belgian Jessica Leyne, the group’s only woman has just crossed Japan to conclude Part Three of the seven-stage Globetrotter 90 trip.

Jessica, 27, (and five feet, two and a half inches tall) is a math teacher and web designer by trade, and a Ducatista by passion. Although delayed by Typhoon Malakas in Japan, she delivered the Multi to the fourth rider in San Francisco. Brazilian Eduardo Generali will ride to Indianapolis, Indiana, on the next leg, documenting the trip in real time by video. The full trip is available at globetrotter90.ducati.com.

Jessica left Tokyo on September 17 and immediately took to the roads of Mount Fuji, the volcano that dominates over the city populated by 35 million. From there she made her way south to the city of Kiushi, Japan. There Jessica visited the Hiroaki Iwashita museum, which houses the world’s only remaining prototype of the Ducati Apollo.

Jessica’s trip was packed with emotional experiences, as she recounts. On Kinki island, she saw the famous “Meotoiwa,” the “married couple rocks,” a symbol of love. The stark contrast between modern Osaka and the forests and white beaches she saw en-route proved to be an evocative one, as was the traditional castle in the center of Chūō-ku city. “An excellent example of how the ancient can live in the modern,” she said. “Jess” crossed the Pacific, arriving in San Francisco to meet with Eduardo Generali and hand him the bike on October 5th.

Now it’s the turn of Eduardo, A 28-year-old adventure tour guide, and riding instructor. He hails from Itu, in the State of Săo Paulo in Brazil, and his passion for two wheels was passed on to him by his father. He will travel the roads of the western United States, from California to Indiana in the Midwest. He will visit legendary race tracks such as Laguna Seca and adventurous routes like Pikes Peak in the Colorado mountains, the setting for the famous “race to the clouds” that Ducati won on three consecutive occasions from 2011 to 2013.

Jessica faced adversity in the forms of a frozen visor, waist-high mud, and even a fractured wrist, but nothing stood in her way. It was no surprise that when Typhoon Malakas smashed into the Japanese archipelago causing floods and wind gusts up to 100 mph, Jessica, even with her small build, bravely continued her journey with the Multistrada 1200 Enduro barely delayed by the typhoon crossing the Land of the Rising Sun.

on the official site globetrotter90.ducati.com