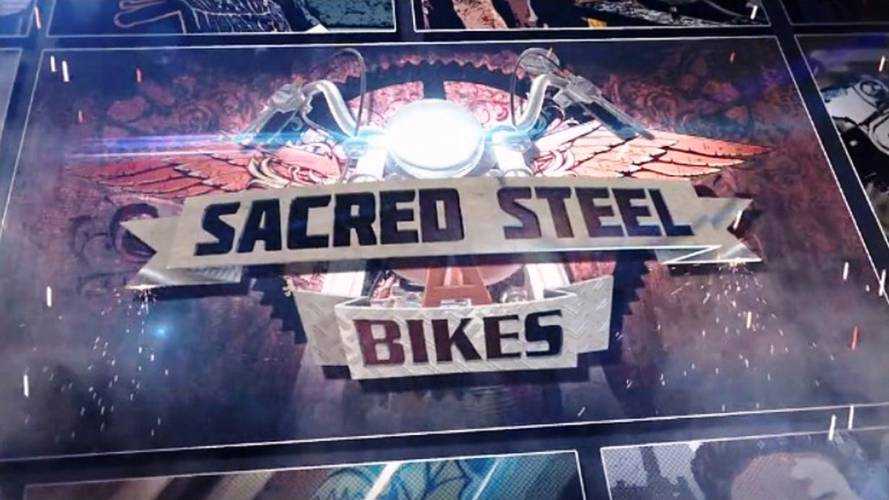 A chat with one of the main characters of Discovery's "Sacred Steel Bikes" TV show.

Discovery Channel is trying to remake Monday nights into Motor Monday, with programing centered on cars, bikes, trucks, and other motorized toys. The newest show to join the lineup is "Sacred Steel BIkes" (premieres Monday September 12 at 10pm EST) about a working-class East L.A. shop that produces traditional choppers, run by Jason Wilson. What Jason and his club lack in money and equipment they make up for with talent, artistry, enthusiasm and camaraderie.

motorcycle club, of which Jason is an active "member."

One thing I was stuck by is how little it seems Discovery has sanitized these guys for the general public. You would expect to hear stories about notes from executives like: "Can you use the word 'douche' less often?" or "Can you avoid making light of the disabled veteran's prosthetic leg?"

When I spoke with Jason he confirmed that he was also surprised at how little he was asked to clean up his language, the shop, or his behavior. They say the word "douche" more often than a Summer's Eve commercial, and all of his club compatriots are called douches.

They build bikes, fix bikes, and ride bikes, but they all have day jobs, too, and most have families and kids to support. No matter how scary and tatted up these guys may look, they really are productive members of society.

There is a bit of confusion in the media about the club, as Jason himself says they are all just a bunch of biker dorks, and it is an "anti-club" with no rules or bylaws - guys join by just hanging around and helping out for long enough. But other sources online say it is a tight knit club that is hard to get into, exclusive, and has chapters all over the world, so who do you believe? You certainly don't get any useful information from the 2012 profile in Street Choppers Magazine, though it is pretty entertaining. Like many bike clubs, they basically do three things: Help each other build each others bikes, drink, and bust each others' chops.

, built in a traditional way. Jason claims there is no pressure to change what they build either, even though his bikes lack any sort of commercial appeal you could sell to Harley-Davidson or Custom Chrome as advertising tie-ins.

They aren't using catalog parts, and they are modifying old stock Harley frames, the way it has been done since World War II. Just watching the first episode you'll learn more about bikes and how they are built than in an entire season of a show like "Orange County Choppers." If you browse through the Sacred Steel shop Instagram account you'll see quite a few of the bikes that get built in season 1, including a Rad Ed "Big Daddy" Roth style chopper/trike, with VW power.

The pilot episode involves building the long blue/purple bike in the picture above, on a tight deadline in order to get it on the cover of Easy Riders magazine.

Jason assured me, though, that this isn't going to be one of those shows where every week they are behind the 8-ball and trying to finish before a deadline in order to build the drama. That being said, the first episode is exactly that, with the editor giving them just two weeks to finish the bike, even though he is a friend and former club member.

I mean, isn't there a new cover that needs a bike on it every 30 days?

The finished bike does look spectacular, but the paint and plating alone looks like it would have taken more than a month to accomplish. I won't ruin it for you by revealing if they get it done just under the wire or not, but for a rush job it does not appear corners were cut anywhere on the Indigo Moon.

I appreciate a good chopper artistically the same way I like a well-finished low rider, but as ridiculous and impractical as it seems, Jason and the team ride them all over. Only time will tell if the quality of the build bikes remains good and the manufactured drama remains minimal, but these guys seem genuine.

He should probably jet that carburetor a bit more rich.

So is it an entertaining and educational show? As reality shows go, it is better than average in this style. If "Antiques Roadshow" is the pinnacle for real and educational substance, and "Pawn Stars" is the worst for accuracy and pre-staged for the show events, "Sacred Steel" is just below "American Pickers."

You have a group of people who are natural characters (maybe too many, and maybe trying too hard), sharing their knowledge of how to build bikes, and trying to accomplish something creative, as they entertain you. It is certainly better than "Counting Cars," or "O.C.C.," or any number of other shows I hate to watch in that genre. "Sacred Steel" could end up as a bike version of "Wayne Carini's Chasing Classic Cars."

RideApart Worth Watching: Yes, a solid better-than-average reality show, 6 out of 10. I will probably try to watch the first three episodes and see if it gets better.

Redeeming Quality: You will see some old-school techniques being used that you may never have seen before. Want more information on actually raking and chopping a frame? You got it. Want to see how a gas tank is made from scratch? Jason is a union sheet metal worker with decades on the job.

Worth Noting: This shop is literally two blocks from Lucky Wheels Garage, which is shaping up to be the new motorcycle district in Los Angeles.

Be sure to tune to catch the premiere of "Sacred Steel Bikes." There are a few preview videos, and behind the scenes background on the Discovery Channel page for the show here.