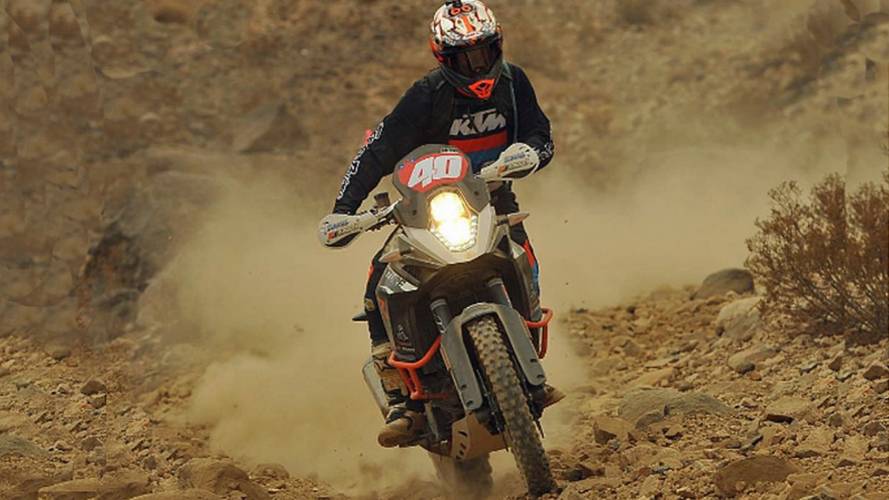 Four time Baja 1000 champion and avid off-road racer Quinn Cody successfully raced his KTM 1190 Adventure in the Senior A class at the final round of the 2016 Hare and Hound series at Johnson Valley OHV. While finishing the race in one piece was important, his priority was raising donations for the Kurt Caselli Memorial Scholarship which has been set up in memory of his late friend, and former racer, Kurt Caselli.

Cody managed to navigate through three, 35-mile loops consisting of rocks, silt, dirt, more rocks, ruts, hills and some more rocks, aboard a 550-lb adventure bike. He also finished 78th overall out of 130-riders, 28 of which, would DNF.

“It was a bit of a struggle but I managed to bring the big girl around all three loops of today's Hare and Hound season finale and I actually had some fun along the way,” Cody posted on his Instagram. “The KTM 1190 Adventure R is one mean motorcycle that continues to impress me.”

Mr. Cody did his part, now if you happen to have a few bucks to spare in your Pay Pal account, we encourage you to donate to the Kurt Caselli Foundation too. If not, we can all still be friends. Either way, please feel free to spread the word so they can reach even more motorcycle riders with a love for off-road racing.

It is amazing what these big Adventure bikes are capable of. Just ask Quinn Cody who completed 100-miles of grueling Hare and Hound aboard his own KTM 1190 Adventure R.