Expedition 65: The Adventure of Preparing for Adventure 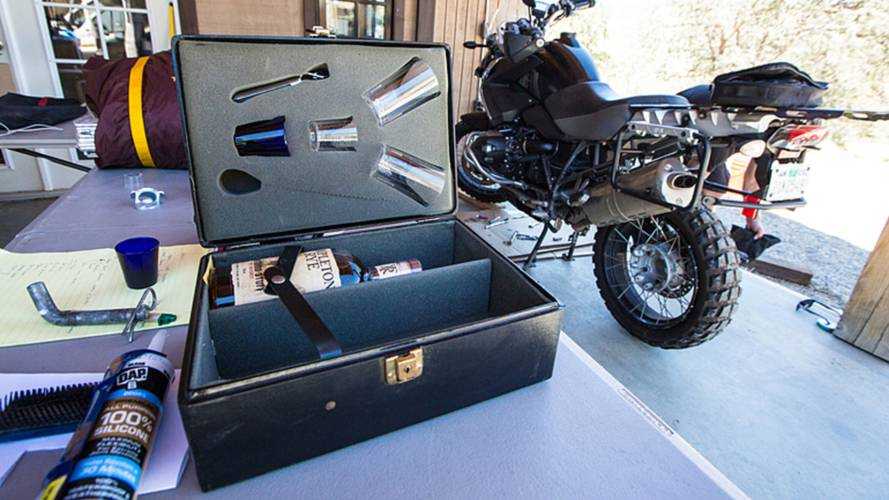 The Expedition 65 team prepares to travel to the very tip of South America.

Motorcycling jack of all trades Alfonse Palaima has spent the past several months preparing to join the RawHyde Adventures team on a journey from Cartagena, Colombia, to Ushuaia, Argentina. The team is calling their "little tour" Expedition 65 - so named because it will cross 65 degrees of latitude. We've asked Alfonse to send us "postcards" along the way. But before the team can go, it has to get ready to go...

It is often said, if you want something done right, you do it yourself. But the steps involved with preparing for such a journey as Expedition 65 are numerous and detailed. Here’s what you need to know to get it right the first time:

Beginning with the body, before turning to the motorcycle, I’ll show you what you’re up against even before you roll your first mile, or, more appropriately said, kilometer. Book, organize, and plan for all of these things at your own pace - and on your own schedule of course - as this is merely a checklist of to-do items.

A journey this big takes more than just a year of planning, it requires a support vehicle. We chose the Ford Transit van, boosted it, wrapped it and shipped it with the motorcycles to South America.

Even before we get the wheels rolling, there’s a litany of legalese and preparation (paperwork and pills) necessary to do such a ride. Most of which we started thinking about a year ago, but didn’t actually get to doing until recently. Tsk tsk!

Starting with a few travel guides, my favorites include a full complement of Culture Smart and Lonely Planet books, one for each country. The Culture Smart series are small and packable, and filled with intelligent information on history and etiquette. I buy one for every country I visit now. The Lonely Planet books are loaded with lodging and restaurant data that I tend not to use as an adventure motorcycle traveler, but the maps and attraction information always keep me interested. Plus, they can be purchased as either analog ink-on-paper or digital objects (even better for two-wheeled travel).

Since we’re headed for foreign countries, so you need a passport. You’ll also need at least one open page for stamps from each country you visit, and your passport must be valid for at least 6 months - be sure it isn’t expired or soon will be.

A year's worth of "book learnin'" for a two-month journey. The Lonely Planet books also come in digital form for easy transport on a smartphone or tablet.

An International Driving Permit from the American Automobile Association - with an extra set of photos for use with passport processing - is an easy get, no appointments or membership involved. It’s a worthwhile investment; for minimal cost you have to hand a multiple-language translation explaining your legal ability to drive in your home country.

Then you’ll need to protect your health, and prove your good health in some places - like Bolivia, which requires you to carry proof of a yellow fever vaccination. The Centers for Disease Control and Prevention (CDC) suggests an entire list of vaccines travelers should get in three levels: basic, suggested, and needed. Which ones you need will vary.

If find yourself needing something more than Imodium - like, real, life-threatening medical attention - you might feel more comfortable getting help from your motherland. And for that you’ll need a way to get there. Medical evacuation insurance now comes in various forms, from many sources. Most common in the motorcycle market is an annual service from either Global Rescue or MedJet Assist.

Then it’s back to the paperwork side of the process, with both your yellow fever vaccination and passport in hand, to get a visa for Bolivia. As the only country on our route requiring such paperwork, prepare for another few weeks (two to three) of processing that bit of paperwork. Lastly, we all need to get there - “we” being our motorcycles, as well as our bodies. Booking two one-way tickets from the United States to Cartagena, and back home from Puente Arenas, Argentina, is the way to go for the rider.

As for your bike, that’s a little trickier.

Before the ride, my 2012 BMW R 1200 GS is getting ready with new parts from Givi, AltRider, Atlas Throttle lock, Michelin, and Doubletake.

Now for the more mechanical parts of your journey: the machine you’ll be riding. Assuming your bike is paid in full, fully farkled, serviced, and the title is in your name, you’re ready to get it ready for South America. Oh, and don’t forget fresh tires!

Since there is no “legal” need for a carnet de passage in the Americas, we don’t need to plan for one. (Also known as a Carnet de Passages en Douane, a "carnet" is a document proving you own your bike. According to Wikipedia, it is recommended when travelling to Colombia, so, uhm, we're looking forward to hearing how Alfonse and the team fare -Ed) But we will need some “local” insurance, for which Colombia has its own version, separate from a policy you’ll get for the rest of the countries in this tour.

A SOAT (Seguro Obligatorio de Accidentes de Tránsito) is a compulsory insurance for all vehicles transiting the territory that covers personal injury caused to people in traffic accidents. It covers all victims: the driver, occupants particular, passengers (public service vehicles), pedestrians. For Colombia alone, for a machine over 200cc, it's relatively inexpensive. I’m not sure if I can get that in advance yet - still planning this one myself.

An insurance policy for the remaining five countries used to be easily obtained from Motorcycle Express, and payable online, until just this summer. At the time of writing - after a few weeks of research - we’re just now finalizing comprehensive and collision insurance policies with Clements Worldwide and AIG. And yes, we’re well aware of the looming deadline! The price typically varies based on the engine size and the number of months you wish to be covered.

Starting out with a fresh pair of tires is a must for such a journey. I chose the Michelin Anakee Wilds for their versatility and longevity. The pair I took off had 6,000 road miles on them and still enough tread for quite a few more!

Similar to buying evacuation insurance for your body, having a backup plan for your motorcycle’s safety is also a good idea. A top-shelf account with MedJet Assist will also include such transportation of your motorcycle.

For the brief moments you and your beloved motorcycle are separated while on tour, you might feel a little better knowing she’s securely locked to something. I went for the mack-daddy of chain locks from Abus (an alarmed disc lock and chain combination) and, just in case shiznit goes way crazy, I'm looking into a few GPS tracking options as well.

Find-It-Now (FIN) is a system that includes a hidden GPS tag on your bike and a connection to the local police via their dispatchers (United States only, for now). Spot is a name already familiar to adventure riders as a personal safety and rescue beacon; the company now has a solution for tracking your motorcycle as well, for if and when it goes on its own wander.

And lastly - unless you were planning to make the journey to South America even longer, by riding through Mexico and Central America before putting your bike on a boat to cross the Darien Gap - you’ve got to get your bike down there. With the main shipping port in Colombia on the northern coast, at Cartagena, shipping from the U.S. west coast requires a longer and more costly trip through the Panama Canal.

Having the collective power of a dozen-plus riders all going to the same place at the same time, we’ve arranged for mass transit of our machines toward the equator in the form of a pair of shipping containers disembarking from Miami. As the Expedition 65 team is scattered across the United States, and shipping out of California only creates an unnecessary need to pass through the Panama Canal, we found it easier to plan a collective shipment from the East Coast. With a sx-day journey at sea from Miami to Cartagena, and week-long processes of paperwork on each side of the sailing, just plan for three weeks to a month of transport for safety's sake.

Those of us not living in Miami plan to use our American Motorcyclist Association or BMW Motorcycle Owners of America memberships to book a shipment with Federal Motorcycle Transport to get our bikes to the containers. Expect a few weeks for such a transfer, by the way, as they don’t ship your bike directly. Instead, the company picks up bikes along the way and sometimes holds them for more efficient group shipping.

The animated television "G.I. Joe" series of the 1980s used to remind us that, “Knowing is half the battle,” and being prepared makes you a winner. Top to bottom, or tip to tail, either way you see it, making the 10,000-mile journey across South America requires stamina and knowledge. We’ll talk about getting healthy in another story, but until then, feel good knowing you're as ready as you'll ever be. Throttle on!

Think I'm missing anything? Add it to the comments below to help me - help us all - be prepared for the ride. Thanks.