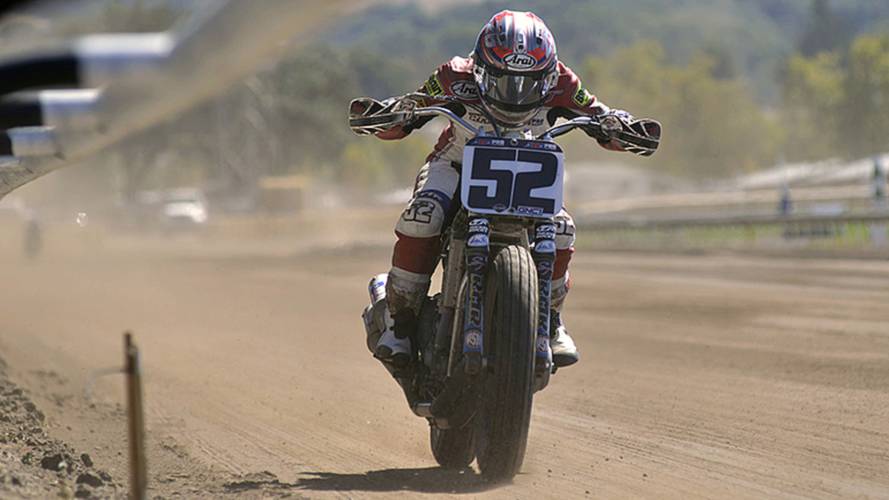 The best way to get more women racing is by showcasing the ones who currently race the American flat track series.

When I interviewed Michael Lock, he explained in great detail why he chose to become CEO of American Flat Track (formerly AMA Pro Flat Track) Racing. Lock explained that the main reason he decided to be a part of this motorsport is because it’s how racing is supposed to be: He enjoys seeing a scene where “half the paddock are father and sons in a box van with two bikes, where the dad is crew chief and chief mechanic and the son is wide-eyed and getting out there and racing.”

However, Lock quickly corrected himself by stating: “I’m not being fair here. I meant fathers and children because we’ve got a whole generation of teenage female athletes coming up in our pro sport—not in a separate class. They are not being patted on the head and put in the corner. They are racing against the guys, and actually a few of them are doing quite well.”

It's always great to see female racers out there competing with the guys, especially when they are just as competitive. However, they are still the minority, and it will be a while before we see women matching the number of men on the grid. And the best way to get more women racing is by showcasing the ones who currently compete in any form of two-wheeled motorsport: road racing, dirt racing, motocross, or flat track. To me, the latter is quite intriguing since it's America's oldest motorsport, and women have actually been pitching it sideways since its inception - we just don't hear about them often. Let's change that.

Michael Lock explained that a lot of racers in the American Flat Track series are “kids... from places you’ve never heard of,” and Shayna Texter definitely fits the bill. Born in Willow Street, Pennsylvania—population of about 7,500 people—racing is in her blood: Her grandfather rode dirt bikes and her father raced flat track. Now, she and her brother, Cory, are American Flat Track pro racers themselves.

“We got a little bit of a late start , but we’ve been riding our entire life,” Shayna says. “We started racing in 2003, but we had to wait for my dad to actually retire from road racing and dirt track in 2002 to get our shot.”

Shayna Texter has gone from beginner to race winner in only three years. Photo by Greg Sharp.

Shayna has been racing pro in the AMA since 2008 and has quite a few accomplishments to her credit, with the most notable one being the first female to win a Pro Singles Main Event. She currently competes in the GNC1, and 2016 marks her third year competing in this class. What made 2016 a bit sweeter for her was landing a spot on the Richie Morris Racing Team. (Richie Morris was formerly a road racing team that decided to switch to the dirty side).

Even though Shayna was able to compete with the support of her new team, it didn't come along without a few obstacles. She tells me that 2016 has been by far her toughest year since turning pro.

“It’s been a bit of a learning year for the team and I working together…We’re making progress every weekend—we ran into a lot of uncertain variables going into each weekend, including Springfield. We were running really good during the last race and blew up two engines. So it’s unfortunate the stuff that’s happened along the way, but we’re looking forward to finishing strong,” she says reassuringly.

Interviewing one of the nicest people I've ever met: Shayna Texter. Photo by Greg Sharp.

Richie Morris Racing and Shayna are already looking at the 2017 season. There are a lot of new things in the pipeline for next year, one being the addition of adding another full-time rider to RMR: 2015 GNC1 Rookie of the Year Jared Vanderkooi. Additionally, the crew staff will be expanding.

“Richie Morris has already turned his focus on 2017. He's working on getting a new mechanic that has some dirt track experience to bring in, and a teammate to help raise the data that we’re given each weekend to just try and elevate their game as a team,” Shayna explained.

Which manufacturer motorcycle Texter and Vanderkooi will be competing on is still unknown. And even though 2016 wasn’t Shayna’s best year professionally, she’s looking forward to next season.

“Being that we’re a new team and that this season has been a little bit rough, we’ve actually turned our focus to 2017 and making sure we’re ready to come out swinging at the first race.”

Lodi (pronounced LOW-DIE, not LOW-DEE like I initially thought), California, is a bit bigger than Willow Street, PA, but is still not well-known like its surrounding cities. It’d still be considered to many as “a town you’ve never heard of.” It’s located in the northern part of California's Central Valley, which is a great area to find plenty of spots to ride dirt bikes. Caleigh Ryan took advantage of her native area and pitches it sideways at the Lodi Cycle Bowl racing club and track.

Caleigh Ryan always wanted to dirt race motorcycles ever since she started riding them aged 10 years old. After only two years on two wheels, she began racing. She professed: “It was something that I always wanted to do –it’s in my blood—it’s always been a passion for me.”

Luckily, the Lodi Cycle Bowl track is only 10 minutes from her house, so getting into racing wasn’t too difficult. She also did quite well her first year by winning the all-women's class on a smaller bike, and soon after moved up the 250cc class the following season. She’s now competing on 450cc motos in the Open A Semi-Pro class, and after racing for a total of seven years, she has decided to try her hand at racing professionally.

“As stressful as racing is, it helps me de-stress from my normal life. Just being out there, being able to compete with other people—guys and girls—and go fast is probably one of the coolest things about racing. It’s always something I’ve been in love with,” she says.

In order to prepare for pro racing, she has been in touch with current American Flat Track riders for advice—specifically on how to secure sponsors. This is important to her because she's a college student.

Influencing Other Women to Ride

In addition to being an aspiring pro racer, Caleigh is also teaching young women to ride. She’s been working with Shelina Moreda, professional road racer and owner of She’Z Racing, to not only get her name out to secure sponsorship, but to also help Moreda run her all-women’s dirt camps. Since Caleigh is Moreda’s chief instructor, she attends all the camps and also runs the Kick Start program, which is designed for women who’ve never operated a motorcycle.

“It’s awesome to see all these girls learn to ride and I love seeing when they—they’ve never ridden before - they figure something out and they get this light in their eyes. It's amazing,” she says.

Between her involvement in the She’z Moto camps and hitting the ground running to become a professional racer, Caleigh does have her plate quite full. However, she’s very excited about what the next year has in store for her. “I think 2017 is going to be a great year,” she says optimistically.