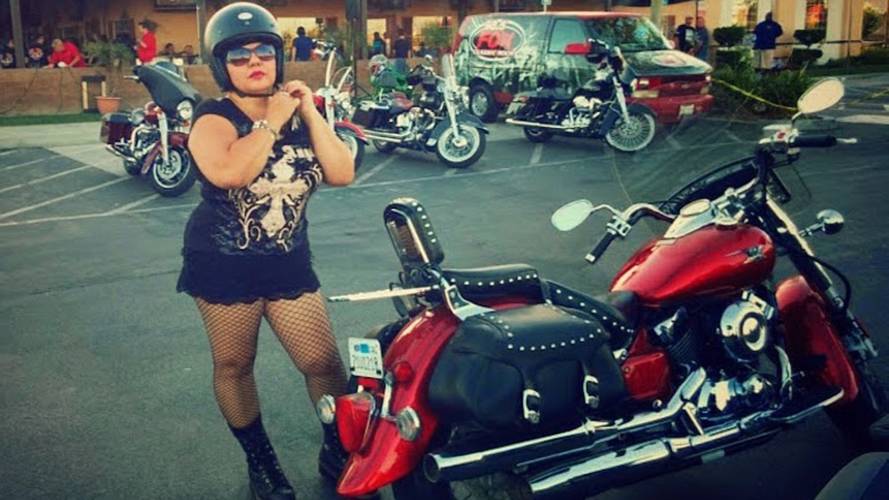 The indomitable Sash Walker is featured in our most recent Women Who Ride profile.

Screw going to a therapist – motorcycling is the best therapy out there. When you get on your bike and go for a ride, especially a long one, there’s so much self-reflection that happens. Just ask Sash Walker, who writes about the magical and therapeutic experience of riding a motorcycle across the United States in her gritty biography, The Rude Biker Chick: Lessons From My Daddy.

“The wide open prairie is what really took me. Those were moments that I had with myself where I thought about things and processed emotions. There were emotions that were felt in that moment and in that time... healing that happened on the leather seat of my church – my motorcycle,” Sash said of her personal epiphany that manifested while riding through Wyoming.

Finding the Right Kind of Therapy

Sash (born Tina) Walker is a writer, rider, poet, blogger, online marketer, and all around rude, yet inspirational biker chick who went through a lot of shit to get to where she is today. (Full disclosure: She is also a very good friend of RideApart Director Chris Cope)

In her own words, via her blog site sashmouth.com, Sash explains that she’s considered rude because she refuses “to conform to other's expectations. I find that every time I straddle my motorcycle and fire up the engine, there's more for me to learn. Every person I meet has something to teach me, every horizon is a new gift of beauty, every morning another opportunity to love someone. I want to live my life experiencing, not existing.”

For Sash, she didn't find her own two-wheeled therapy until later in life. However, she's been around motorcycles since birth. Her father was a part of a 1%er motorcycle club*, and she looked up to him and his biker friends, who would hang around at the house during the first half decade of her life. She also dated a guy in high school who rode, but at that point she was still just a passenger. Unfortunately, there was an extended period of time after that period, where she didn't touch a motorcycle for years. But the story takes a turn for the better when she crossed paths with the man who would soon marry.

She eventually found her way back to two-wheels when she met her husband, Steve Johnson. They not only had motorcycles in common, but they also compliment one another professionally. Before meeting him, Sash was in print publishing, and Steve had a business doing internet marketing. Together, they decided to start TooMuchTina, a motorcycle, marketing, and media company,  in 2012.

Sash and her husband Steve hae found happiness as the two compliment eachother in both work and life.

Shortly after getting their business off the ground, Sash decided to transition from passenger to actual rider in January 2013. And in March of that same year, she and Steve embarked on a two-and-a-half-year trip across the United States that set this whole thing into motion.

Sash Speaks Out in The Rude Biker Chick: Lessons From My Daddy

Being on the road for two-and-a-half years wasn't the initial plan. The pair originally planned a six-month trip. But as soon as they made it to Tucson, they decided to extend their time on two wheels.

It was after their first year on the road that she decided to write a book about her physical and emotional journey to where she is today. "After that first year of processing so much of the trauma of my childhood, and so much of the self-inflicted trauma," she explained. "I decided that I needed to write this stuff down and share it in a different format than just blog posts. And that's how that book came to fruition – it was after processing all those hours in my helmet, all those miles, all those memories."

In her book you learn not only about parts of Sash's 35-state, 55,000 mile journey, but also of her traumatic upbringing, toxic relationships and how they formed her into the woman she is today. It can be difficult reading, but I couldn't put it down.

Sash's parents divorced when she was just five years old and things almost immediately changed for the worse. She grew up with her mother and step-father, who were emotionally abusive and neglectful parents. Sash was sexually abused by her step-father's friends during her teenage years and her mother allowed it.

Sash soon turned to drugs as an escape. Even though she eventually got clean, she fell into a troubled relationship with her ex-husband of 15 years. She said that her life was on mute, and she had no voice during their time together.

"My husband and I were very miserable together, but I felt that I didn't have any options to leave. And I stayed much longer than I should have," Sash reflected.

She had hit rock bottom, but says she was able to pull herself out of the dark hole she felt trapped in after she met Steve and started on her two-wheeled excursion. She soon realized that motorcycling was the best way for her to begin the healing process.

"Anyone who spends eight hours, day-after-day, alone in their helmet," she explained, "you have a lot of time to work at really deep-down emotions, and trying to figure stuff out and make sense of it. And that's what I did."

Sash's (And Her Daddy’s) Words of Wisdom

Many things make this book an excellent read. However, what I personally liked about it is the words of wisdom that her father bestowed upon her. You find his quotes sprinkled throughout, and they are mainly words of encouragement. A great example of this is on page 29:

"'Where we live does not define us. It is what lives inside of us that defines who we are,' my Daddy whispered in my ear.

What lives within me is nothing more than each moment. As I cross the landscape I feel connected to the Universe, I feel the green leaves, the broken yellow lines and the sparkling, cracked black path coursing through me. I breathe in the scents of the honeysuckle, dead skunk and exhaust and it becomes part of who I am, in that moment."

As for the book's reception, Sash says that people had told her it was traumatic, and certain parts were tough to read. "I was abused as a child and there's a lot of that abuse that's written in the book." She continued, "Children of trauma and abuse continue to abuse themselves throughout their lifetime until there's an epiphany that turns them around like motorcycling has done for me. I love myself now; I don't want to hurt myself anymore."

Her book is indeed raw, and at times can be emotional. But it's very poetic, makes you love and appreciate two wheels even more than you do now, and learn about a truly inspirational woman.

"My motto is be you: boldly embrace your own uniqueness. Don't try to be like anyone else, if you be yourself you can't go wrong," she said.

If you're interested in picking up The Rude Biker Chick: Lessons From My Daddy, head over to this site to purchase it for $9.99.

*"1%er" clubs are so named because of an apparent claim by members of the American Motorcycle Association after the 1947 Hollister Riot that 99 percent of motorcyclists were law-abiding citizens. Clubs like the Hells Angels, Bandidos, Mongols, et. al., often wear 1%er badges as an act of defiance against societal norms.