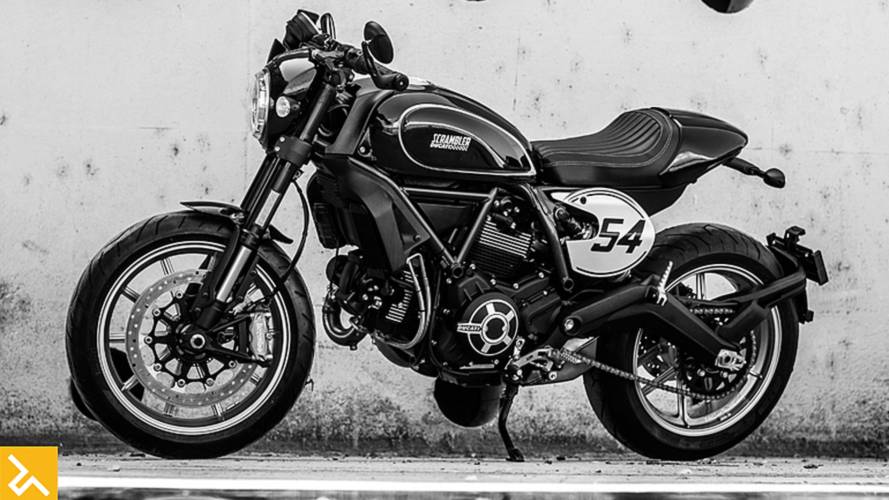 Even though we knew Ducati’s Scrambler stable was adding a couple new colts, the two new models revealed in Milan did offer a few surprises. The Cafe Racer is an homage to British and European roadsters of the 60s, graced with a few touches of contemporary technology and style.

While most of the street scratchers back in the day ran 18- inch wheels, or an 18 rear and 19 front, modern practice dictates 17-inchers at both ends, which the CR has. The Diablo Rosso II (120/70 front, 180/55 rear) should ensure crisp handling and stability on Racer Road or the race track, and a decent measure of durability in the process.

Ducati was probably wise to not go full-cafe with clip-on handlebars, employing individual aluminum bars that approximate the mid-height clubman bars of years past. While the cafe racer style has faded and been revived a number of times over the past fifty years, it never dimmed entirely. There will always be some segment of young riders keen to emulate the racing crouch on the open road, and get back to the bodega before the end of “Be-Bop-aLula” on the jukebox. Or at least look cool trying.

“With its Black Coffee color scheme, the Ducati Scrambler Café Racer takes us from the 1960s all the way to today's Land of Joy. The culture shares a style that extends beyond the bike to encompass apparel and accessories. The Café Racer thus broadens the scope of the Scrambler brand which, now, for the first time, offers a fresh take on what was one of motorcycling's most influential movements.”

Groovy. The Café Racer is powered by the air- and oil-cooled Desmodue Twin taken from the Icon model, with black-trimmed covers and machined cooling fins. The characteristic teardrop tank with interchangeable aluminum side panels is combined with a dedicated seat featuring a cover for the passenger section.

Stylish touches include the Termignoni exhaust with dual tailpipes and black anodized aluminum cover, the nose fairing, lateral number holders and stubby mudguard are all clear references to the bikes that roared down British streets back in the '60s. The bum-stop seat has a removable cover for a passenger.

The Cafe Racer’s geometry has less rake and trail than the Icon (21.8-degrees and 3.7 inches, vs 24-degrees and 4.4 inches) for quicker steering in the twisties. The Brembo braking system features a Bosch 9.1 MP ABS system with a pressure sensor. To combine maximum stopping performance with minimalist styling the front wheel has a single 330mm disc with a 4-piston Brembo M 4.32B monobloc caliper with radial attachment. This decision to mount a powerful single-disc front braking system was taken to leave a clear view on the right side of the wheel.

At the rear, a 245mm disc is gripped by a caliper with a 32mm piston. The number 54 is a nod to former factory racer Bruno Spaggiari, who in 1968 raced in the Mototemporada Romagnola, on a Ducati with an engine derived from the original Scrambler's single-cylinder 350cc power unit. The photo of his jump at the Cesenatico GP is classic. Rippled by the roots of the pine trees, the uneven asphalt created true jumps that tested the riders' skills and ultimately determined who would win one crossroads after the other.