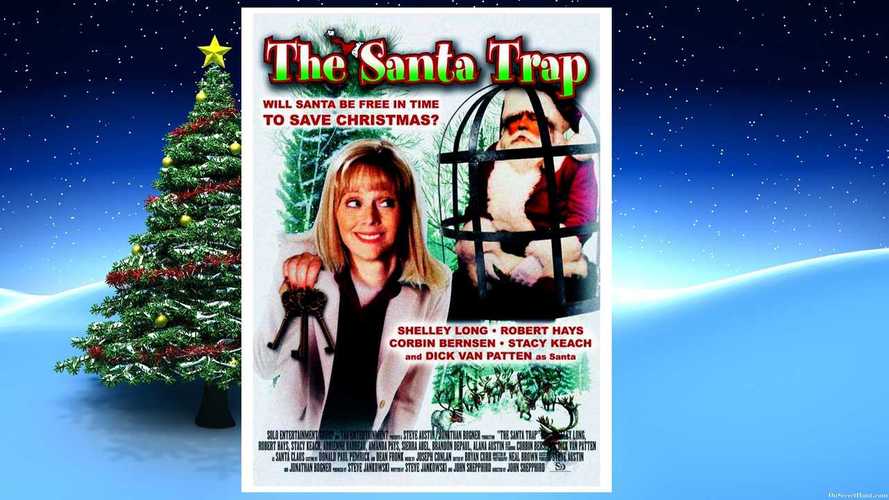 When Santa Claus and a tough old biker end up in a holding cell together near Christmas, of course there's going to be an identity mix up with hilarity ensuing. Can a biker save Christmas? Will Santa and the kids melt the biker's cold, cold heart? I dug deep for a biker-related Christmas movie and The Santa Trap is as close as I could find.

This movie was either made to go directly to cable or may have been a DVD-only release; it certainly never was in theaters. The cast is notable though, with Dick Van Patten as Santa Claus, Stacey Keach as the biker, Shelly Long as Mom, and Robert Hays as Dad. Corbin Bernsen (You'll always be Roger Dorn to us, Corbin –Ed) and Adrienne Barbeau are also in it, but not much. This being a Christmas movie, there are also several kids in it, but no one who went on to fame or infamy.

The movie starts with Biker Max just minding his own business and riding his bike into town, when sheriff Corbin Bernsen and his deputies pull him over and throw him in jail for outstanding warrants. Meanwhile, mom and daughter are out doing some Christmas shopping, even though it doesn't feel much like Christmas here in sunny La Quinta, California. Thinking all these grown-ups need a boost of Christmas spirit, young Judy sets out to capture Santa Claus and prove he is real, using techniques from Home Alone and the game Mousetrap.

As you can imagine in the 21st century, Mom and Dad don't just accept that this old man who looks like Santa Claus sneaking around their house is the jolly old elf himself, even though it is Christmas Eve. The police show up and take Kris Kringle in to the station, where he ends up spending the night with the biker, and a third old white-haired drunk. Due to this entire police force consisting of just three men, two of whom make Barney Fife look competent, Biker Max ends up getting out of jail while dressed as Santa. This leads to a hilarious holiday hostage situation.

I must admit, by about half way through the movie I got a little distracted. I do know that Stacey Keach ends up filling in for Santa and delivering presents, the other old drunk may help, too. Of course, everything works out in the end. The family, the police, the old drunk and even biker Max learn the true meaning of Christmas, and peace and goodness prevail, at least in La Quinta.

RideApart Worth Watching: No, not really 3.5 out of 10, but at least it is a holiday movie you haven't seen.

Redeeming Quality: Robert Hays, Ted Striker from Airplane, is in it and you will be reminded of all the stupid jokes from that movie whenever he says anything. Just don't call him Shirley!

Worth Noting: There is literally 30 seconds of motorcycle riding in this movie. I had such high hopes, because you would think "scary biker saves Christmas" would be a real high-concept winner. Maybe I'll work on a script with my fellow RideApart writers.

If your favorite holiday movie is Die Hard, you may want to watch Exit Speed, which I reviewed here, instead of this. Or watch a double feature, with the family-friendly Santa Trap while the kids are up, then that R-rated action flick when they go to bed.

The Santa Trap is on iTunes for download. I watched it with commercials for free on some streaming channel, but it seems to have vanished from their site. There is an unauthorized copy up on YouTube right now, however.