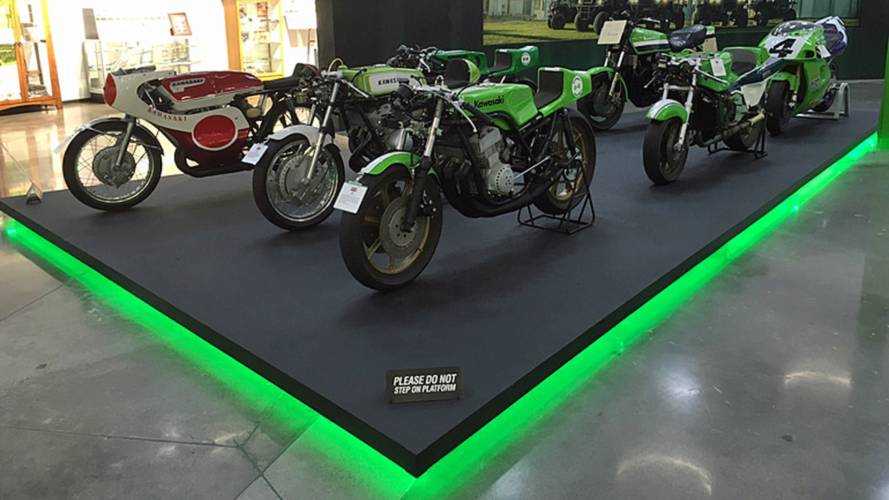 Kawasaki USA has an amazing Motorcycle Collection in its new HQ in Southern California. Here's a look at the sweet bikes they have assembled.

Team Green keeps a collection of important bikes at its U.S. headquarters to honor its long tradition of fabulous bikes

The KMC Motorcycle Collection features a handful of bikes and vehicles that have been instrumental to the success of the brand over the past fifty years. Some of the rare gems you will find on display include the original Kawasaki Samurai, a pair of pristine 440 and 550 stand-up Jet Skis, a brand new Tecate 3-Wheeler, the very first Ninja 900 and many more original factory motorcycles. The collection is on display at the new Kawasaki headquarters in Foothill Ranch, California.

For those people who love racing and bleed Kawasaki green, you better bring a change of underwear because you’re going to crap a Twinkie when you see these amazing specimens of Kawasaki’s rich racing heritage. There’s Ricky Carmichael’s AMA 250 Championship winning KX250 SR, Scott Russell’s 1995 Daytona 200 winning Muzzys ZX-7R and a bunch more.

We combined the best of what we could and included some notes on them. Consider this a walk down memory lane or a history lesson, depending on what era you were born into.

This is the last of the Kawasaki KR 750 Triples. It was the race bike of choice for legends including Gary Nixon, Yvon DuHamel and many others and it still looks like it would be a lot of fun to ride. Imagine rolling this baby out at your favorite track day.

The 1972 Kawasaki H2 Mach IV became popular with street riders because it was so damn fast. How’s 12.2 @ 110 mph sound? That 750cc Triple proved to be unbeatable on the track and the street for many years.

You’re looking at an original, recently uncrated 1985 Ninja 600R. It has zero miles. This was one of the first sportbikes I ever owned and I am sure that I am not the only person with some amazing riding stories that took place aboard one of these bikes.

This is an example of the 1982 kZ1000 S1 Superbike. Look close at how technology changed in just over a decade when you compare it to the Muzzy Kawasaki Superbike in the images below. The 1982 Kawasaki KZ 1000 S-1 was a factory built race replica based off of Eddie Lawson’s 1981 AMA Superbike Championship winning motorcycle. Kawasaki offered the S-1 to qualified AMA racers.

1996 Kawasaki ZX-7R. Scott Russell won the 1995 Daytona 200 Superbike race aboard this Muzzys Kawasaki ZX-7R. After winning the WSBK title in 1993, Russell dominated Daytona, winning it for the third consecutive year on this bad boy right here.

The Muzzy from the rear

This is the 1982 KR500, the last of the Kawasaki 2-Stroke Grand Prix race bikes. The KR500 featured an aluminum monocoque frame, rotary valve induction, adjustable steering geometry and both front and rear eccentric axle adjusters. Eddie Lawson rode the KR500 in the 1982 AMA Formula One series.

One of the most innovative machines in the display are a pair of original Kawasaki Jet Skis. The Jet Ski was a game changer for Kawasaki in the early 80s. They were sold in 440 and 550cc s-stroke engines and they ushered in a new era for the company. In the decades that followed, the Jet Ski has evolved into massive, supercharged sit-down models and most recently a big, bad four stroke stand-up that may change the game once again.

The Tecate three-wheeler was innovative too. It featured the same engine found in the 250cc KX dirtbike, only it was in a purpose built three wheeled ATV chassis. The results were impressive and man oh man, this thing was exciting to ride.

Kawasaki A7 Avenger. Check out those pipes.

How about the 1967 A7 Avenger? After the success with the Samurai, Kawasaki created a 350cc version and called it the Avenger. It was one of the first motorcycles that Kawasaki built in response to the demand for a more powerful bike. It woudl be a recipe for success as the company made a name for itself by building bigger, faster bikes year after year. Hey, wait a minute here. Is this a Scrambler?