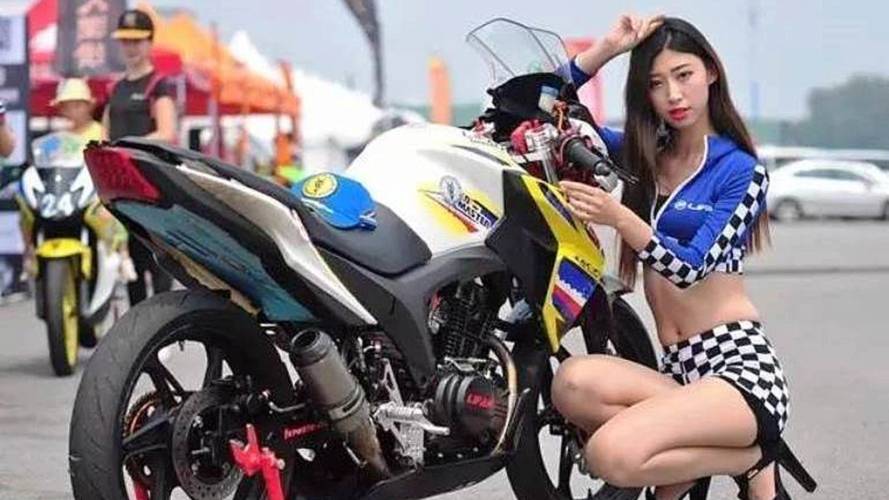 Lifan intended to increase its presence in the American motorcycle market for 2017.

Lifan, the largest maker of motorcycles in China, and one of the biggest in the world, is re-entering the US market in 2017 with street bikes, dual sports (maybe), and a Grom fighting mini. If you recall my review of the Monter Moto minibike, it had a Lifan pull start 80cc motor. While doing Google research on that, I found the new American Lifan website, and information on their upcoming 2017 bikes. Obviously, these are not going to be cross-shopped against the latest liter bikes, but might be attractive entry level rides.

Pictured above in actual racing trim, the King Power Racing sport bike is a 200cc bike, with a fuel injected, water cooled single making 18hp. If you are familiar with other Chinese imports, you know they typically have Honda CG125 clone motors, with air cooling and a carburetor. It is nice to see Lifan at least trying to move into the 21st century with new modern motors. Only time will tell if the brakes, suspension and durability of these bikes are good enough for the tough life of a first bike for the American rider. It has a 30.5" seat height, weighs just 330lbs, and has an estimated top speed of 75 mph, making it well suited as a starter bike. Peak power is at just 8000 rpm too, so it seems you don't have to work hard to keep it in the power band.

Even less is know about this bike, except the specs, which are nearly the same as the KPR-200. The only real difference I can see is it is lighter by about 15lbs, which would indicate it is just a naked version of its sportier brother.

This is the Lifan Grom fighter, and features an evolution of the familiar Honda clone motor. I would love to do a 4 way comparison test of this, The Kymco K-pipe 125, the Grom, and the Kawasaki Z125, but who knows if we can make that happen. The Lifan is about 20lbs heavier than a Grom, but still weighs less than 250lbs, and as you can see features upside down fork, and disc brakes front and rear. If we are to believe the spec sheets, the Lifan mini makes 2 more horsepower than the Grom, which doesn't sound like much, but when you are talking about bikes this small  that is a 20% increase.

Lifan had a display at the AIMExpo in Florida last month, and there was a dual sport on the stand, but no details were in the press information they sent over. On their website is this bike, the X-PECT 200, with an air cooled 200cc motor making 14hp and weighing 286lbs. Anyone who rides off road knows just how popular the lowest priced play bikes are. Some consider them maintenance free, because they stay running long enough for the original buyer to either graduate to a bigger bike, or move on to a different hobby.

Lifan has been around since 1992, starting like many popular brands with one guy in a garage fixing and making stuff. They have been in the US market before as well, but ended up running afoul of the EPA because some of the bikes and scooters they (or other importers) brought over did not meet the required smog laws. They are a major player in the small bore bike market in Asia, and their replacement motors (whether official imports or not) have repowered a ton of old Honda Z50, Trail 70, and pit bikes in the past 10 years in this country. In Asia, and other countries, they also make cars, trucks, buses, trains, running shoes and wine.