Femmewalla - The Biggest All-Women’s Track Day in the US 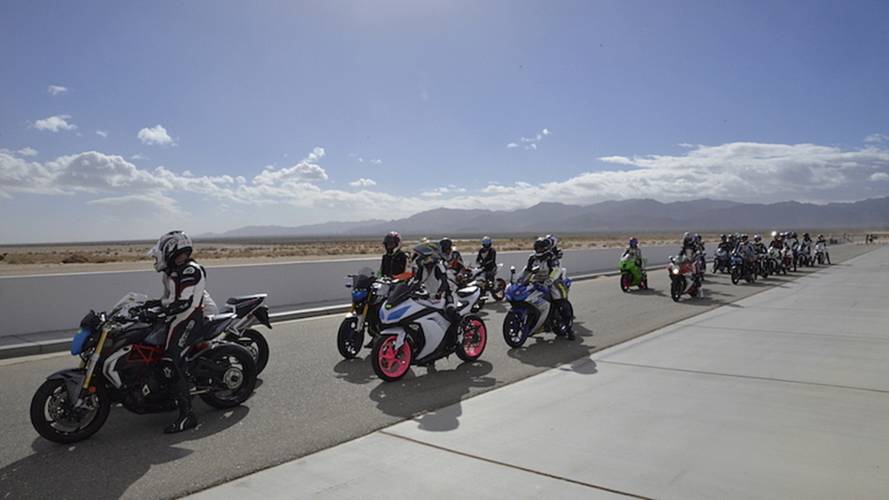 Laura Llovet: I Finally Made it to Femmewalla – The Biggest All-Women’s Track Day in the United States

It was two years ago when I first heard of Femmewalla, an all-women’s charity track day held at Chuckwalla Valley Raceway in Southern California. I knew then that I had to attend, but when registration for this year's event first opened in the fall, I still wasn't 100-percent committed to going...

The reason for the constant hesitation was due to how far it is. The track is 536 miles from Llovet Towers, we (my fiancé Greg and I) would need to travel by way of Burt, our ’76 Ford F250 which averages eight miles a gallon on a good day.

But, I eventually bit the bullet – because I’ve been wanting to go for so long—and registered for the event. Greg and I packed up everything on the morning of departure and headed from Northern California to that part of the Golden State locals optimistically refer to as the Inland Empire. It was a chilly trip; the truck doesn't produce a lot of heat, and the entire state was under cold and wet conditions. After quite a few stops for gas, a Burt scare (he was making weird noises), and food, we made it to the track right before it closed its gates at 11 pm.

There were various trailers, RVs, and trucks already there, but we were able to secure a spot to fit our beast. There were still women out and about in the pits, chatting about motos and the track day. I introduced myself to a few of them and joined in on the conversations. The fatigue of the day’s travels temporarily wore off as excitement began to creep in; I couldn’t wait to see what Femmewalla was all about!

Femmewalla is a track day that raises money for a charity called The Unforgettables, which helps families pay for funeral and burial expenses for their child.

This point in the story will be a bit somber: Unfortunately, CVR’s co-owners, Aimee Grana and her husband, Mickey, lost their 2-year-old daughter Jessica to a tragic accident eight years ago right around the time they were trying to get the track operational. The Unforgettables helped them during this trying time, and the Granas wanted to pay it forward. They decided to hold the first Femmewalla event in 2011 to help raise money for the charity.

Micky, Aimee, and Emily Grana embracing one another during a group photoshoot. Photo by CaliPhotography.

An event that began with only a handful of women grew exponentially; Roughly 20 women took part in the first event whereas more than 90 took part last year. On December 16, 2016, the event had approximately 84 women signed up to raise money for a good cause, all while doing what they love: ripping around the asphalt on two wheels.

Last year (2015), the Femmewalla event raised more than US $11,000 and hopefully this year that amount will be surpassed. To date, this particular track day has raised some $50,000 for The Unforgettables foundation.

When I emerged from my enclosed trailer that morning, the sun was out and the sky was blue. I welcomed the warmth and started to get excited about the day’s riding. I quickly realized that Femmewalla isn’t just any ‘ol track day. No, this event was packed with really cool activities. Jason Pridmore’s School STAR Motorcycle instructors were there offering lead/follows as well as two-ups. Additionally, we got to share the track with AMA/MotoAmerica racers like Benny Solis and Chris Fillmore to name a few. There were women pro-racers, too: MotoAmerica racer Patricia Fernandez attended the event, as well as Melissa Paris, who has been a part of Femmewalla since its inception.

Femmewalla drew a few motorcycle manufacturers, who brought their fleet of bikes for us gals to try out. This included KTM, who brought along a handful of RCC390s and 690s, Yamaha who brought over a good mix including their new FZ-10, and Husqvarna, who brought a 701 supermoto.

This track day was set up like any typical one, utilizing the three-group format (Advanced, Intermediate, Novice). However, there was more riding to be had once you got off the main track. There was a mini track set up in the parking lot where we could hop on 125cc-and-under mini motos. I brought my little DRZ-125 and decided to spin it around a few laps – it was a fun way to kill time before your session was called again.

I explored the pits before the rider’s meeting, as well as throughout the day. One of the first things I noticed were the rad bikes scattered all around. There were motorcycles of all displacements, years, and color-schemes (nice ladies!). The second thing I noticed was that there were women from all over the country. A lot of them resided in Southern California, but there were also women from Utah, Arizona, and Minnesota!

As for the track—Chuckwalla Valley Raceway—it’s one I’d never experienced before. I’ve heard a lot about how fun it is, so I was looking forward to taking my bikes out. I brought two: my tracked-out Ninja 250R, and my street/commuter Yamaha FZ-09. I had never before taken the latter out on a track, mainly because it’s easier just to bring the former since it’s track ready. And even though I was tempted to take out the Ninja 250 for the first few sessions, I decided to go with my FZ.

As it turned out, I didn’t touch my race bike that day. My FZ was too much fun; having never ridden the bike aggressively on the street (honest, officer), the track revealed a whole new beast that I didn't want to ignore. After the second session, I decided that this was the bike I was going to stay on for the rest of the day.

Unfortunately, we only got about two sessions of calm weather before a wind storm kicked in. It blew sand across the track, which made me nervous initially. After talking with a few girls beforehand about it, they told me that as long as there isn’t standing sand on the track, it’d be fine. Sure enough, I never had trouble with traction; however, the storm made it quite difficult to see and focus at times. Either way, I embraced the opportunity to ride as often as I could—sandstorm and all.

When I first signed up for Femmewalla, I only purchased four raffle tickets. Oh how naïve I was! How big the raffle really was didn't dawn on me until I kept getting updates from the Femmewalla Facebook page about the prizes being raffled for that day. Everything you can think of that us motorcyclists would want was up for grabs: gear, generator, tools, track days, riding schools, etc. I pre-purchased four tickets, and after I realized what was at stake via Facebook, I emptied my piggy bank and purchased five more tickets on the day.

The raffle was set up as a “boxed” raffle, meaning that there were boxes in front of each prize and from there you could decide which box you wanted to put your ticket(s) in. I put in one ticket for a few prizes, but I really had my heart set on the Yamaha Champions Riding School (YCRS)—so I put in four tickets for that.

Once the raffle started, I noticed a number of women had A LOT of tickets. Aimee was in charge of pulling tickets from the boxes and calling out the numbers, and throughout the raffle, there were ladies who won more than one prize. At one point, Aimee mentioned that one of the Femmewalla attendees purchased $500 worth of tickets! By this point, I held no hope that I would win anything, much less the YCRS school that I wanted so badly.

Will she call my number?

You see where this is going, don't you? Then it came time to call the winners of the YCRS gift certificates: One was for a one-day school and the other for a two-day. Aimee called the number for the first ticket and... they didn’t align with anything I had. Once she got to the second one, the numbers she recited started matching up, and then... they all matched.

I screamed so loudly that my throat hurt for a while afterward. But it was OK because I freaking won! What an amazing way to end an amazing day.

My first-ever Femmewalla track day was a memorable experience that left me excited for days after. Despite the sandstorm, Chuckwalla is a such a fun track that the wind seemed secondary. What I find so incredible about this day is not only the amount of women who attend, but also the generosity of motorcycle businesses and organizations who donated their time and items to the raffle to help raise funds for The Unforgettables. I plan on making the long drive again next year and intend on recruiting as many women as I can (hopefully I did so by writing this story).

I hope to see even more ladies at Femmewalla in 2017!