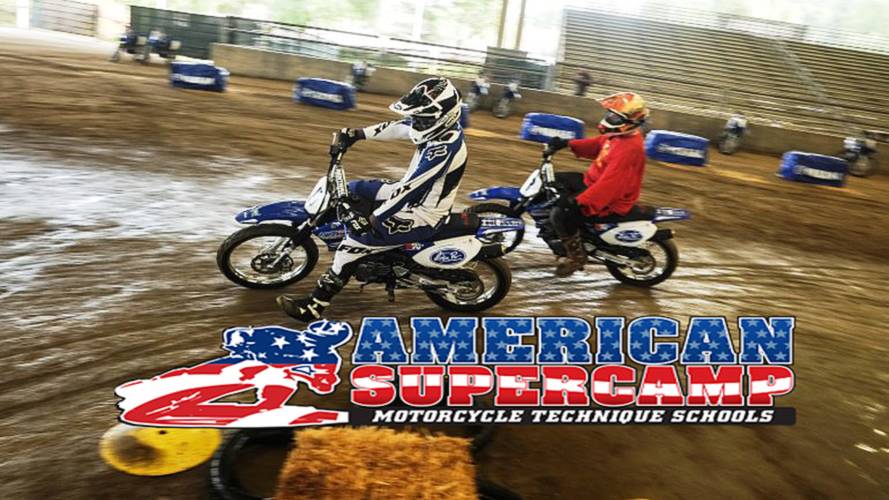 With the return of Flat Track in effect, we thought it was a good time to check out American Supercamp Flat Track School and learn to slide from the pros.

Just before the new year I got a chance to spend the day with real AMA legends, and some young up and coming racers, sliding sideways in the dirt. If you ride any sort of bike at all, you should add the American Supercamp to your bucket list.

Because this camp is held in Southern California, and we are moto-journalists, we had an extra helping of American Flat Track racers to keep us from hurting ourselves out there on the bikes. Seated from left to right are Chris Carr (7 time AMA Grand National Champ), Shayna Texter (first woman to win a pro flat track main), Jared Mees (champ in 2009, 2012, 2014, 2015, and runner up in 2016), and Bryan Smith (the man who beat Jared for the 2016 championship), with school principle Danny Walker (former pro flat track and GP road racer) standing on the far left. To the far right are three more young racers who split their time between pro racing and instructing.

Our rides for the day were to be identical Yamaha TT-R125 play bikes, shod with stock tires on the front, and a cheap dual sport tire out back to facilitate sliding. Our race track was to be a tiny oval of less than an 1/8 mile, laid within the Industry Hills Expo Center's Speedway course. The school provides all the gear and bikes, and will gladly hand you a new one if you bend or break your first choice. You might not think such a humble set up could teach an experienced rider anything, but this is exactly how Danny coaches beginning racers to competitiveness.

The first thing you learn is that everything you already know is wrong. For flat track you sit on the bike differently, you move around the bike differently, you steer the bike differently, etc. Whereas on the street, or road course, you may be sitting with your back straight, elbows in, and leaning with the bike, for proper flat-track cornering you need to slouch, keep one elbow up and one straight, and rotate your butt to keep it on top of the bike pushing it down. I had seen guys using this technique, and exaggeratedly so, at Hell on Wheels events, but I just figured they were just trying to look goofy.

As you may notice in that picture, the Supercamp's coaching sessions go around in both directions. Just when you think you are getting the hang of it going one way, they make you stop and circle the other way. There is a lot to process, and if you concentrate on one aspect, you typically forget the others, and the next thing you know you are coming in too hot and falling on your posterior.

In the above photo, one of the instructors tries to get us to stop wasting his time by being so bad at everything. Not really. Actually, everyone was amazingly patient, even with one group of people that had never ridden a motorcycle before – ever. As it turns out, people who have never ridden before do great in this class because they don't have bad habits to unlearn.

Probably the best drill taught in the class is doing laps in the dirt one handed. With just your right (throttle) hand on the 'bars, and the other hand on the gas cap, you really have to think about what you are doing. Unlike most riding, you steer into corners in flat track instead of counter steering, in order to help initiate the slide and scrub speed. Now, I never got fast enough to really be doing it, but by learning the technique by rote, I am well on my way. We got plenty of laps of the course, but at my age I am slow to learn new riding skills.

The class I took part in was an accelerated half-day session, sponsored by the folks behind the American Flat Track series, which encompassed much of what the Supercamp usually covers over two days. Danny Walker says many riders with experience don't really start to get it until the morning of the second day, and are sliding by the end. The last drill we all ran involves wetting one corner to make it as low traction as possible. If you do everything right, you should slide right through it, sitting up on the bike, wheel turned, head pointed where you want to go.

I suspect I was not the worst student they ever had – at least I hope I wasn't – and I am sure my flat track riding will be much improved because of the camp. The first Hell on Wheels flat track race of the season is this weekend, and hopefully I can try out everything I learned. I may even try to take the full two-day camp when they come back to the Los Angeles area in March. The first American Flat Track race of the season is the Daytona TT, during bike week, on March 16th. You can see their schedule and sign up at the American Supercamp website, and you can often find discounts off the $600 cost on their Facebook page.