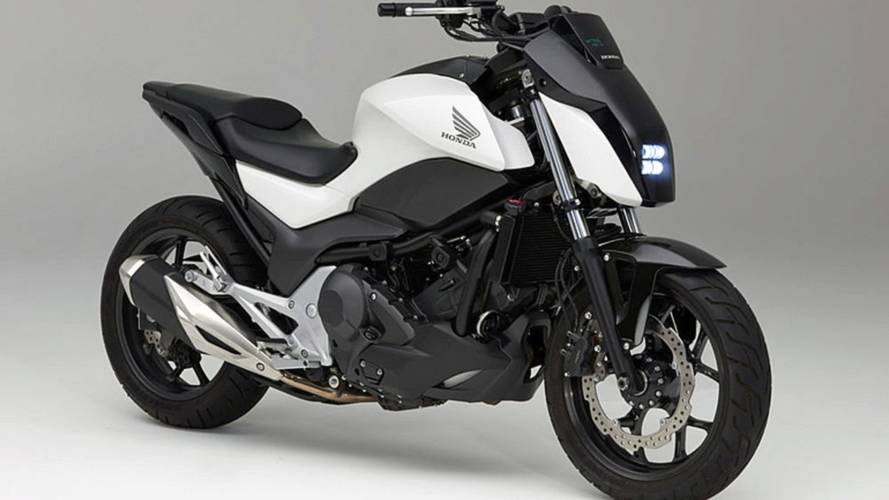 More high tech motorcycles are on the horizon. Take a look at the Honda Self-Balancing Motorcycle Revealed at CES 2017.

The Honda robotics team, known for ASIMO the cute white robot and the Uni-Cub scooter, has applied some of its technology to a self-balancing motorcycle. Using a Honda NC platform, Riding Assist employs variable electro-geometry without the use of gyroscopics to keep a motorcycle balancing upright on its own.

While two wheelers are effectively self-balancing at higher speeds, the problem of low-speed balance is the issue. Honda engineers have designed a system to maintain uprightness at speeds below three miles per hour by modulating the angle of the front fork. While this may seem to some like the proverbial solution in search of a problem, it was probably an engaging engineering project.

Riding Assist not only adjusts the rake and trail at walking speeds, it changes the steering angle of the front wheel at even lower speeds, so the machine maintains an upright position, with or without a rider. Just what applications this function may have in real world situations have yet to be revealed.

The balancing act is achieved with the use of three electric motors; one to modulate the fork angle, another for steering adjustment, and a third in the front hub that can propel the motorcycle on its own. So, theoretically, a rider with a remote transmitter could summon the bike from a distance, lower the chassis to his (or her) predetermined mounting height, and motor into the sunset. Cue the credits.

Though it may seem far-fetched, since Ride Assist is housed in the front end, it could be applied to existing models. Foreseeable applications may be for use by riders with disabilities, new riders who have trouble overcoming the low-speed jitters, stunt riders developing new routines, parade formations…

In any case, there’s little doubt that in the forthcoming era of techno-wizardry, Honda’s team of advanced gadgeteers will be out at the leading edge. Welcome to the future.