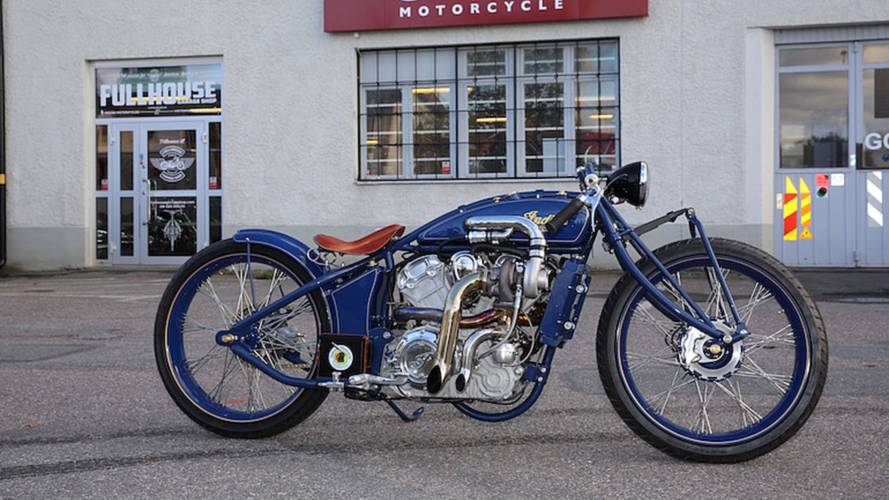 A group of Swedes piece together a beautiful forced-induction Super Scout in honor of Oscar Hedström.

Bike made in tribute to Indian's co-founder

Indian Motorcycles has a long, rich (if not rocky) history spanning back to 1897. Originally called the Hendee Manufacturing Company – named for company founder and bicycle racing champion George M. Hendee – the company produced bicycles. Soon thereafter, Oscar Hedström was hired by Hendee to to build engines to power his bicycles, which were called Indians. The Swede would be vital in the production of the company’s first production motorized bicycle in 1902, a model that was powered by a single-cylinder engine built by the Aurora Automatic Machinery Co. of Illinois.

In addition serving as the company's chief engineer, Hedström further made a name for himself when, in 1903, he piloted one of his machines to victory in an endurance race from New York to Springfield and back. That same year Hedström also set a new world speed record, reaching a mind-blowing (wait for it…) 56mph! As the years went on, Hedström continued building the company and though he technically wasn’t a founder, he is nonetheless largely credited as being such thanks to his monumental contributions to the early motorcycle manufacturer.

It’s for these reasons that FullHouse Garage, a shop based on the outskirts of Stockholm that specializes in American V-Twins, decided to honor Hedström with one seriously impressive tribute build that wonderfully combines elements of old and new.

“We wanted to build a bike that was related with the Indian history of board track racing and at the same time included the new era of technology that Indian stands for today. The Scout model was the perfect choice and we came up with the name Super Scout to honour the old Scout models that were almost unbeatable on the race tracks,” explained Anders Lundgren who teamed up with Lasse Sundberg of Roth Engineering to churn out this blown antique custom.

To start, Sundberg created a bespoke frame from three different sections. According to Sundberg the one-off chassis was the most difficult aspect of the project which speaks volumes considering the Swedes’ build included a turbo charger and the complex plumbing and tuning a blower necessitates. To incorporate “the new”, the pair opted to utilize the engine (1,133cc), fuel pump, headlight, and shift-pedal from a 2016 Scout. A radiator was borrowed off a CRF450 along with electrical fans.

Then, to add a little more pizzazz (and power), Fullhouse Garage decided to run a water-cooled Garret 25 turbo charger with external waste-gate and boost control. The turbo’s plumbing required tons of custom-fabbed stainless steel parts which closely hug the frame since the two didn’t want to change the Super Scout’s slim lines and shape.

“We wanted to give the bike some extra boost of power and to also show that we can combine an old school look with modern technology,” Lundgren said.

Despite its vintage appearance, the Hedström tribute hides a generous amount of modern bells and whistles. A one-off tank – styled after those found on 1920’s Indians – was crafted to hide the bike's modern electronics, wiring, throttle body, and (K-tech) front master cylinder. The real fuel tank is under the saddle, and uses the Scout's stock fuel pump. Lundgren also hooked-up a fully programmable ECU, as well as a wireless key-fob ignition system that can transmit live engine data and tuning to a tablet or smartphone via Bluetooth.

The front suspension consists of a W&W Indian leaf spring unit, while a sprung H and F Mesinger board track replica saddle (slightly) dampers the rear. The brake hardware is a Beringer inboard system in the front and a Harrison billet sprocket brake in back – both running K-tech cylinders. Sundberg also created the build’s one-off rear fender, as well as a beautiful set of board track style handlebars complete with internal throttle-control and bar-end LED signals. Modern LED lighting was placed throughout, including a slim LED taillight with integrated signals. Finally, a set of (23 x 3,75”) 60-spoke cross-radial laced rims were tossed into the mix before being wrapped in modern Pirelli rubber.

For paint, the two Swedes hollered at Pobben’s Colour & Custom for the killer blue and gold retro paint job. To take the visual-theme one step further, Lundgren had the 2016 engine sandblasted to give it a seasoned look, or what I call “faux-patina”. The use of antique brass bits on the tank and wheels really help to tie the whole look together.

With so much talk these days of combining modern and vintage elements, it’s refreshing to see it done this well. And as awesome as the bike looks, it’s said to be a real ripper too.

“I am still test riding the bike and we are just in a phase to finish the engine tuning,” says Lundgren.

When asked what it’s like to pilot the thing, Lundgren enthusiastically replied, “It feels amazing - like you have moved back to the 1920’s with a rocket between your legs.”

Considering the build now puts down a cool 150-200bhp (depending on boost pressure), I’m inclined to believe the guy. Well done gentlemen.