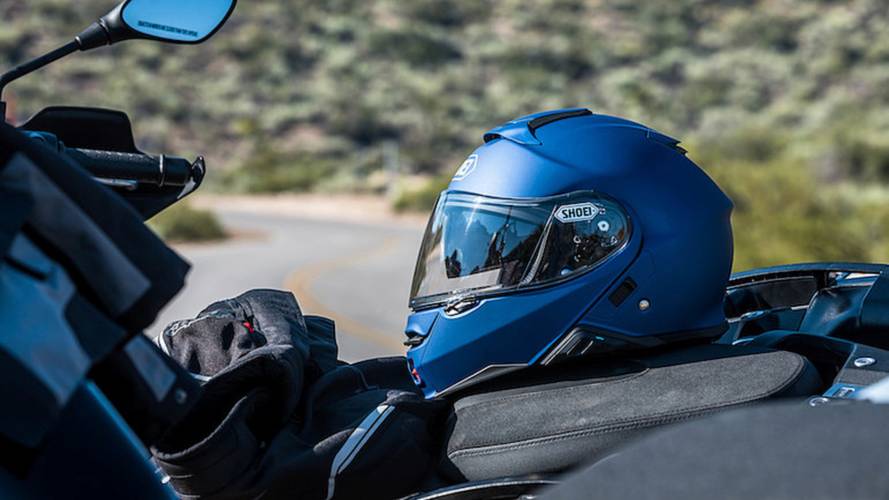 One of the best helmets for long-distance touring and commuting just got better.

Iron Butt riders and commuters rejoice: not too long after Schuberth overhauled its popular top-of-the-line helmet (replacing the C3 with the C4), Shoei is doing the same thing, revealing the new Neotec II.

“The Neotec II boasts incredible advancements in noise-­reduction technology, wind/water tight sealing, face­ cover functionality, and riding comfort,” proclaims Shoei. “An every ­occasion helmet with the adaptability to excel no matter where your next journey takes you, the Neotec II does it all with style and precision.”

Like Schuberth’s new C4 (and R2 full-face), the new Neotec II integrates easily with a Sena Bluetooth communicator – in this case, the Sena SRL system. Unlike Schuberth, though, Shoei hasn’t done away with the Pinlock anti-fogging system. Schuberth has attempted to use a less expensive “similar” system in its C4 and it hasn’t been going down well with customers.

Shoei describes the Neotec II has having a two-in-one design, stating: “‘flip ­up’ functionality offers the convenience and versatility of a full­face helmet that converts smoothly and seamlessly into an open­face configuration.”

That’s an interesting claim to make, since most manufacturers advise against riding with the chin bar up. Yeah, most modular helmet wearers do it (indeed, that’s the reason some folks get modular helmets), but technically you’re not supposed to. For example, in the 312-page manual for the Schuberth C3 Pro (We are not making that up; Germans are thorough) it says right there on page 62: “Never ride with the chin bar raised.”

Shoei's official position on the matter is: “In order to maximize head protection performance, riding your motorcycle with the face cover in the fully closed position is strongly recommended.”

Meanwhile, the Neotec II has all the spiffy features you’d expect of a flip-front, including an internal drop-down sun shield. Shoei prides itself on the Neotec II’s improved aerodynamics, saying: “In addition to its streamlined shape and shell­-integrated spoiler (reshaped and repositioned to further reduce lift and drag), the Neotec II’s innovative top air outlet design serves as a spoiler while in an upright riding position.”

The Neotec II starts at US $699 for solid colors and jumps to $799 for graphics-heavy designs. You can learn all about the Neotec II’s myriad features by visiting the Shoei website.