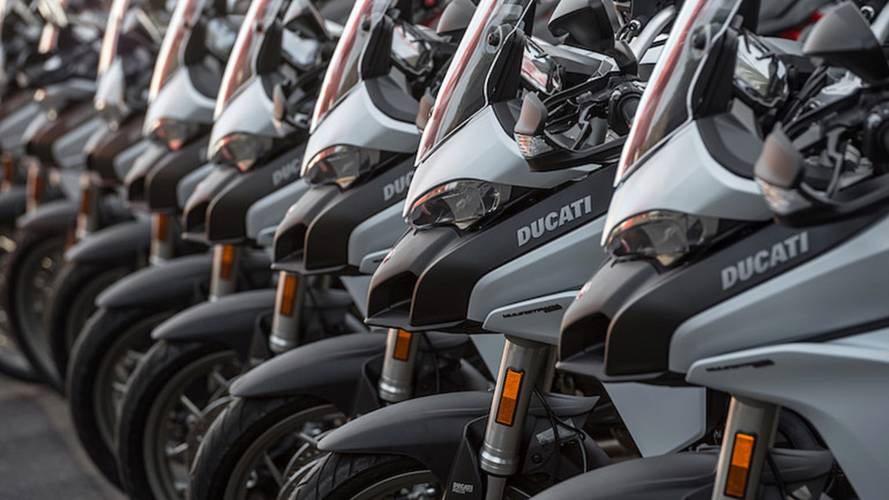 Ducati had great numbers in 2017. Here's how they did it.

Despite a down market, Ducati turns in positive sales and growth numbers for the 2017 year.

2017 was an all around good year for Ducati. In addition to having its best premier class racing season since 2009), the company reported increased sales in most major markets despite general market trends going in the opposite direction. In total, the company sold 55,871 units, a figure slightly up from 2016’s 55,451 total unit sales. Between the company's flagship super bikes, ADV machines, popular nakeds, and immense scrambler lineup, Ducati's diverse model range is what helped to attract new and old customers alike.

“2017 was another great year for Ducati, both commercially and racing-wise," said CEO of Ducati Motor Holding Claudio Domenicali. "We battled it out for the MotoGP title all the way to the last race, won six GPs and brought home the best results since 2009. Continuous renewal of the product range and a strong focus on creating motorcycles of the utmost quality has allowed us to keep on growing despite the problems affecting the world market. I extend heartfelt thanks to all the men and women whose passion makes it possible, every day, to build these extraordinary bikes. Their work has made Ducati an emblem of Italian excellence.”

In the US – Ducati’s biggest market – sales were up 1.3 percent in 2017 with just under 9,000 units sold. Deliveries in Argentina were up by an unheard of 66 percent. 5,805 total units were sold in the Asian markets with a 31 percent increase in China thanks to the dealer network doubling from nine authorized dealerships to 18. Meanwhile, the European market experienced a growth of 4 percent, delivering a total of 31,123 units across the continent. Ducati experienced a 28.3 percent sales increase in the Spanish market, and sales were up by 12 percent with 8,806 units sold in Ducati’s native Italy.

“Despite a shrinking global market, we've succeeded in increasing our market share," said Global Sales and Marketing Director Andrea Buzzoni. "We've expanded significantly in both consolidated markets such as Italy and Spain and in strategic emerging markets like China and Argentina. This is thanks to a range capable of generating loyalty among Ducatisti all over the world yet also winning over new customers with models such as the SuperSport, Multistrada 950 and the Scrambler family. Moreover, the sales success of the 1299 Superleggera and 1299 Panigale R Final Edition confirm our technological and brand leadership in the high-end sport bike segment.”

Ducati also managed to sell 14,061 scramblers, which made up roughly one-quarter of the company’s total sales. The high-end manufacturer also sold all 500 of its 1299 Superleggera models at a cool 80,000 euros a pop. As always, the Monster lineup did good numbers for Ducati, as did the Multistrada family. With the recent release of the brand’s long awaited Panigale V4, Ducati is anticipating good things in 2018.