2017 King of the Motos Results 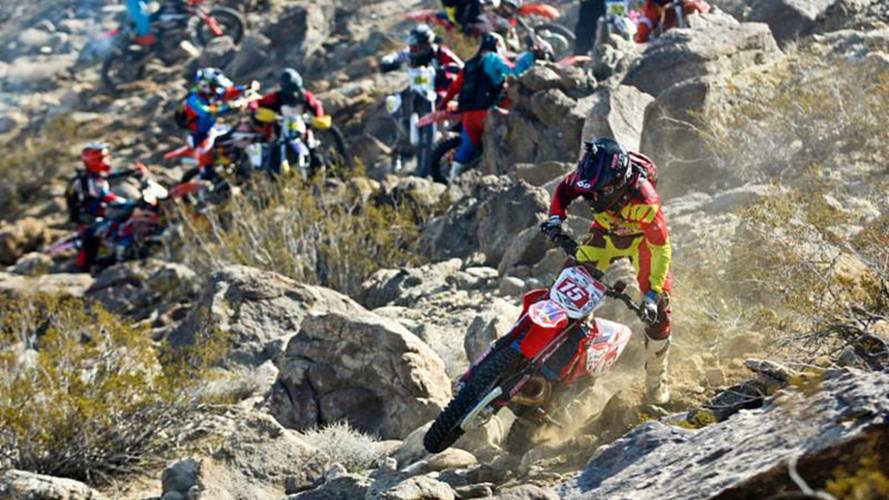 Colton Haaker won the 2017 King of the Motos on a gnarly course that knocked Taylor Robert out of contention and Cody Webb from finishing Race 3.

For those who do not know what King of the Motos is all about, you need to check out the video below of the 2016 event, ASAP. KOM started as a sideshow to the premier Ultra-Truck racing event, King of the Hammers and has since taken on a life of its own. Both races take place at the rugged Lucerne Valley OHV area in Southern California and it is known for its huge, gnarly hill climbs, impassable rock sections, dusty conditions and GPS route navigation that combine to make it one of the toughest motorcycle races you can ever participate in. The format is complicated too. There are three races during the weekend, and the combined finishing order in those events will determine the overall winner. The rider with the lowest overall combined score at the end of the third race, is the declared the King of the Motos.

Husqvarna's Colton Haaker started off his 2017 King of the Motos weekend with a fourth place in the Night Race. However, he used that momentum to win Race 2 and 3 on the way to claiming the overall King of Motos title for the second time in three years. Max Gersten went 3-2-2 for the Factory Beta squad which was good enough for second place and former AMRA champion Mitch Carvolth from Arizona, was third thanks to his 5-4-3 effort. For a complete race recap with images, quotes and other insider details, check out the race report on CycleNews.com.

"King of the Motos 2017 was a crazy one," explains Max Gersten. :GPS navigation and an added night race portion complicated the race and amplified the technical aspects of the Extreme Enduro. I had a solid setup with my Beta 300 RR and was able to have consisted rides with a 3rd in the night portion, a 2nd in the morning portion, and a 3rd in the afternoon segment resulting in a 2nd place overall. I am happy with the result and excited to build off of that for the rest of the 2017 race season."

Defending KOM Champion Cody Webb (KTM) started his weekend off on a good note with a runner-up in the Night Race. He went on to finish 2-3 in the first two races but was stifled in his effort to reclaim the crown after missing a check point and finishing 16th in Race 3. His long-time rival, Taylor Robert won the Night Race and then dominated Race 1 before a big crash in Race 2 that stopped the race and saw him airifted to a local hospital. Bell Helmet rider Morgan Tanke claimed her first Queen of the Motos win in the Women's Pro class.

In one of the most difficult King of the Moto Night Races to date Taylor Robert defeated Cody Webb by one-second, 29:23 to 29:24, setting the stage for a tough pair of races the following day. Third place belonged to Max Gersten with Colton Haaker, another five minutes behind the winning duo. In the Women’s Pro Class, Beta's Morgan Tanke won the Night Race and the Overall for her first Queen of the Motos title. Just check out the image of the Women’s Night Race start for an idea of what these competitors were up against at KOM.

"The new 3 moto format at King of the Motos this year was awesome," said Women's Pro Winner Megan Tanke. "The night race was definitely one of the craziest races I've ever done. Starting up a technical canyon with 100+ racers all at once, at night was insane! The morning desert moto also had a super difficult start but once I got through I was able to ride a steady pace and conserve my energy for the extreme moto. Midway through the 3rd moto I had a major bike issue and there wasn't much I could do to fix. I kept on going and limped it home to the finish! Betas are the toughest motorcycles out there, no doubt!"