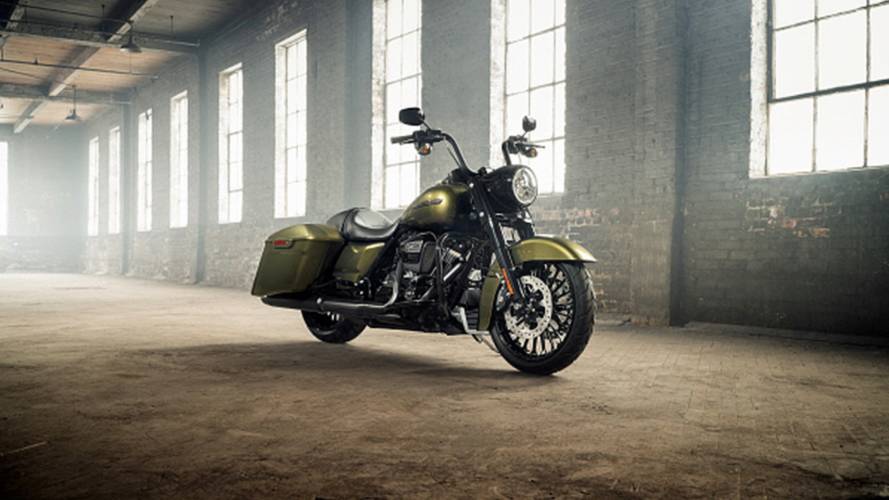 Harley-Davidson sqeezes some new style and a new attitude into the new 2017 Road King.

The new Harley-Davidson Road King, powered by the muscular Milwaukee-Eight 107 engine, has swapped chrome for black and a new stance. “The Road King Special pounds down the boulevard like a gleaming locomotive rolling through a train yard at midnight,” said Brad Richards, Harley-Davidson Vice-President of Styling and Design. By exchanging chrome surfaces for black and lowering the bike’s profile, we’ve moved the traditional Road King into a new space that’s very current in the custom bagger scene.”

A dark front end topped by a massive gloss-black headlamp nacelle is the signature styling element of the Road King Special. A new 9-inch-tall, 1.25-inch-diameter mini-ape handlebar puts the rider in an aggressive posture on the bike that’s also comfortable for long runs on the open road.

“Chrome was retained only on some key engine components,” said Harley-Davidson Designer- Stylist Dais Nagao. “The lower rocker boxes, pushrod tubes and tappet blocks are finished with chrome to emphasize the V-Twin shape of the Milwaukee-Eight 107 engine. We added a new engine-turned air cleaner insert, a finish that’s also featured on the tank console.”

New gloss black turbine cast-aluminum wheels include a 19-inch front wheel topped by a low-profile fender. At the rear, stretched saddlebags flow over the mufflers to provide a slammed-to-the-ground appearance without reducing suspension travel. A rear fascia panel fills the space between the saddlebags and rear fender, and a low-mount license plate module completes the tight, low lines of the rear end.

The Milwaukee-Eight produces 10 percent more torque than the engine it replaces in touring models. In addition to increased displacement, the Milwaukee-Eight engine features a higher compression ratio and four-valve cylinder heads with 50 percent more intake and exhaust flow capacity. The valve train requires no adjustment as the design of the rocker arms enables valve lash to be set at the factory for life. Dual spark plugs for each cylinder contribute to more-efficient combustion. A single chain-driven camshaft is lighter, mechanically less complex and creates less friction and noise.

The Milwaukee-Eight engine weighs the same as the engines it replaces, so its extra power contributes directly to improved acceleration performance. The Milwaukee-Eight 107 accelerates 11 percent quicker from 0-60 mph, equal to a two-to-three bike length improvement, and 11 percent quicker from 60-80 mph in top gear, equal to a one-to-two bike length improvement, compared to the Twin Cam High Output 103.