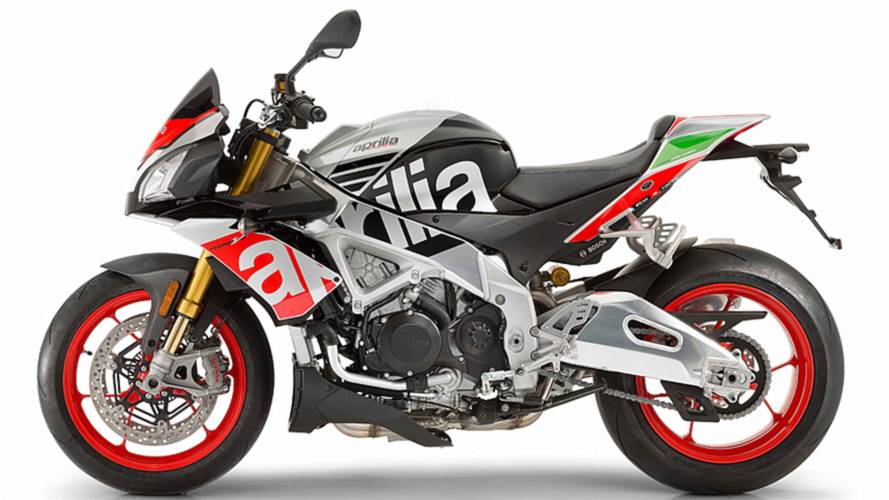 2017 Aprilia RSV4 and Tuono Pricing was announced at the Chicago IMS this past weekend.

Aprilia presented the new 2017 RSV4 RR/RF and Tuono RR/Factory models to the US public for the first time at last weekend’s Progressive International Motorcycle Show in Chicago.

More Aprilia For Your Money:

The natural evolution of an evolving and dominating project, earning seven world titles in just six years, further demonstrate skills honed on the track can be transferred to factory production, continuing to provide the most exhilarating and performance capable package for the street and track, directly off the showroom floor.

The primary goal for new RSV4 was the same as it was in 2009: to be the absolute best uncompromised superbike, the one closest to the current Aprilia racing bikes in terms of performance and effectiveness. Thanks to the experience acquired in the most selective speed championships such as WSBK and MotoGP, Aprilia is able to transfer technologies to their factory products like the new full Ride-by-wire throttle and the dynamic controls package, APRC..

The Aprilia RSV4 RF earns more sophisticated suspension systems with fine adjustments both in hydraulics and spring preload: the fork is a latest generation Öhlins NIX unit, as is the TTX shock absorber; the latter is operated by new progressive linkage that improves the reaction time of the shock absorber itself. There is also an adjustable steering damper, also supplied by Öhlins. On the new RSV4, Aprilia introduces important changes in the Brembo braking system: the front relies on a pair of new 5mm steel discs with diameter increased to 330mm, gripped by monobloc M50 calipers fitted with new superior friction coefficient brake pads.

The Aprilia RSV4 RR represents a top shelf technical platform, ready to provide the rider with “race replica” performance and feeling. The RSV4 RR incorporates all the electronic, engine and brake innovations introduced on the RSV4 RF. As standard equipment, it also has features which were once exclusive to the Factory version, such as magnesium external housings, oil sump and head covers and a wide range of chassis adjustments.

The Aprilia V4 Tuono naked range, confirms the company’s sporting tradition as the only superbike stripped down and fitted with a high handlebar, unbeatable on the track and loads of fun on the road. The Tuono V4 family of motorcycles is offered in two distinct models, both upgraded in 2017 with TFT display, Cruise Control, Cornering ABS, and for the inclusion of Quickshift with clutchless downshifting.

The Tuono V4 1100 Factory is the more exclusive version, dedicated to an extremely demanding public; this bike is equipped with latest generation Öhlins NIX unit derived from the Aprilia RSV4 RF superbike. The evolutionary step that Aprilia presents for 2017 involves both models that, as before, continue to stand out for their factory outfitting and graphics.

The Tuono V4 1100 RR represents an exceptional thrill machine, the heir to a dynasty of naked sport bikes acclaimed by critics as the best in class. The class leader now receives even more performance prowess, with the front Brembo braking system directly from the new RSV4, now on both Tuono models, relying on a pair of new steel discs that have been increased to 330 mm, gripped by the new monobloc M50 calipers and activated by a radial master cylinder on the handlebar.