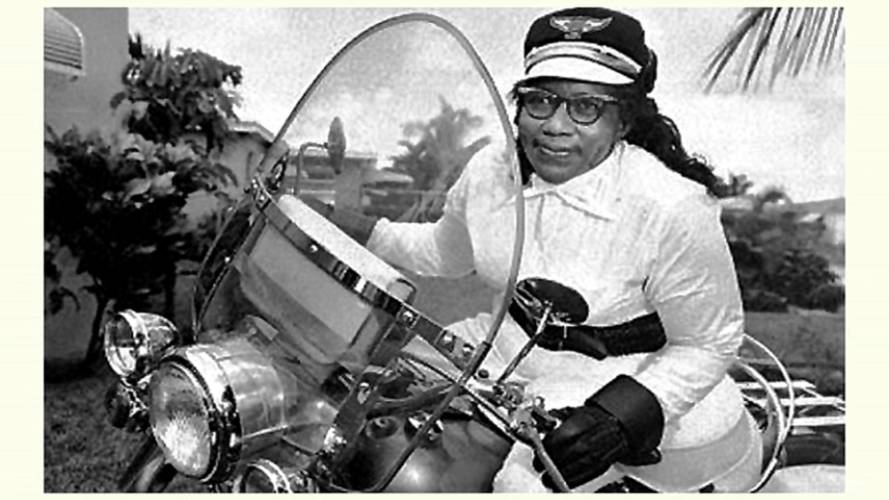 Editor's Note: Since it's Black History Month, we've decided to spruce up some old stories about black motorcycle history. This here story was originally published in 2017. It's been updated with new formatting, photos, and editing. Enjoy!

If you were to read the list of places Bessie Stringfield rode to, and the number of miles she racked up, you would be impressed if it had been done in the 1980s. Bessie, though, pulled it off long before then and in a time when some felt a woman like her shouldn't even be on the road. A 5-foot-2 black woman, and only 19 when she started, Bessie began riding in the pre-WWII, pre-civil rights, pre-interstate highway era—facts that amplify her accomplishments even more.

Della Crewe - Bikers You Should Know

Born on the island of Jamaica in 1911, her father was Jamaican and her mother a white Dutch woman. The family moved to Boston early on, but both of her parents died of smallpox when she was just 5 years old and she was adopted. Her early life is a little murky, and she has said that though her adopted family loved her and cared for her, she was not allowed to use their name. It seems they were fairly well-to-do though because when Bessie asked for a motorcycle for her 16th birthday, the family gave her a new 1928 Indian Scout 101.

After graduating high school, Bessie started crisscrossing the country on her bike, working to earn money at carnivals and county fairs doing motorcycle stunts. Besides stunts, she would also compete in flat track events and hill climbs (I'm assuming she did this on whatever motorcycle she was touring on at the time).

Though history knows her as Bessie Stringfield, that is actually her third—third of six, mind you—husband's surname, which she kept because she was achieving a degree of fame by then.

Her many tours of the continental US carried her through the Great Depression, and she also managed trips to Brazil, Haiti, and Europe. When America entered World War II, Bessie volunteered herself and her bike (a Harley 61 knucklehead) as couriers. Going back and forth between homefront military installations, she eventually crossed the country another eight times for the Army. Don't forget: much of the country at the time still lacked major through-streets, many of which would have been barely paved, let alone lit or well marked.

You can see the CD badge, for Civilian Defense, on the front fender

After the war and approaching middle age, Bessie didn't slow down at all. She settled in Florida, eventually becoming known at the "Motorcycle Queen of Miami". Some of the 1950s stories told about Bessie have her winning flat track races while disguised as a man then being denied the trophy when she revealed herself and demanding a one-on-one test of motorcycle skills from a local police chief so his officers would stop harassing her for riding through his town.

The Iron Horse Motorcycle Club, Bessie is the smaller woman

Bessie Stringfield has been honored by the AMA Hall of Fame, and the Harley-Davidson Museum (she owned 27 of their bikes in her lifetime), and is honored every year with the AMA Bessie Stringfield Award to honor women who are leaders in motorcycling. This amazing woman really deserves a feature-length film tribute, either a Ken Burns-style documentary or a big budget biopic.

You can find more details about Bessie on her Wikipedia page, or her AMA Museum page.