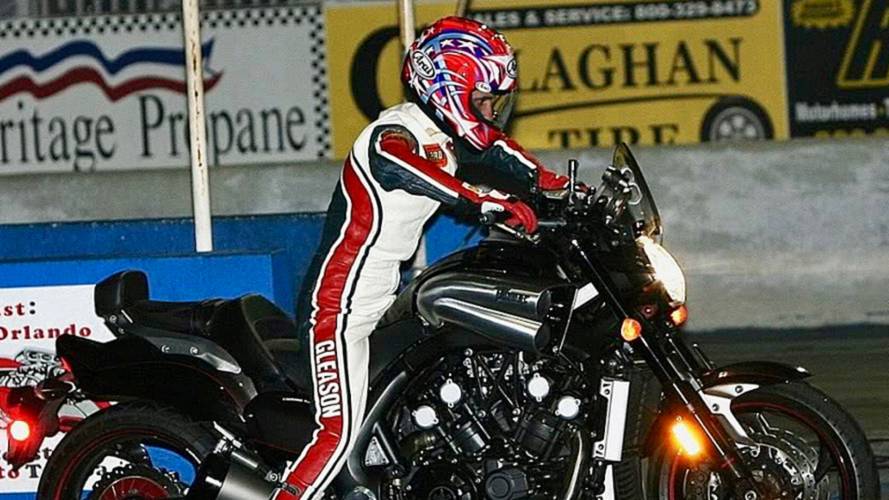 Dragbike Legend Jay Gleason has passed away over the weekend. The man they called PeeWee ripped off a 9-second 1/4 mile on a V-Max in 1986 with Cycle World.

Yamaha Motor Corp., U.S.A., has reported that Jay “PeeWee” Gleason, an iconic dragbike racer and member of its Yamaha family of racers, passed away over the weekend.

Bob Starr, general manager of communication at Yamaha Motor U.S., said: “PeeWee is a huge part of the Yamaha VMAX legend. His talent on a dragbike helped us sell a lot of VMAX motorcycles, and he will forever be associated with the fabled, V4-powered, Sport Heritage machine. Mention PeeWee Gleason and a lot of people instantly think of the VMAX, and what he did on that bike. We will miss him, and we will never forget him.”

Back in 1986, for a feature story that was published in Cycle World magazine, PeeWee, a well-known and highly talent dragbike racer, climbed aboard a Yamaha VMX12 VMAX at Baylands Raceway, did a rousing and smoky burnout to bring the rear tire up to temperature and maximum grip, and proceeded to post a quarter-mile time of under nine seconds.

That day, Yamaha says, the world learned that the VMAX was the fastest, quickest, most powerful production bike ever. It also compelled many customers to visit their local Yamaha dealers and purchase VMAX motorcycles of their very own.

In 2009, more than two decades after his original VMAX quarter-mile run, PeeWee repeated history aboard a 2009 VMAX, on which he ran the quarter mile in 9.513 seconds and at a trap speed of 143.70 miles per hour.

Jay “PeeWee” Gleason was one of a kind; a soft-spoken, yet highly talented dragbike racer. Godspeed, PeeWee.