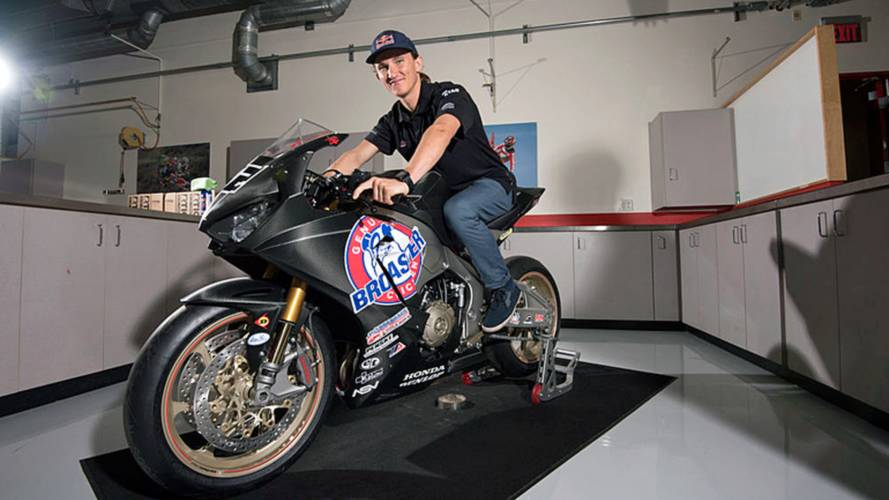 (Upon reading Honda's media release we were disappointed to learn that Gagne will not, in fact, be competing on an actual broasted chicken. – Ed.)

American Honda has announced that Jake Gagne will race a Genuine Broaster Chicken Honda CBR1000RR in the 2017 MotoAmerica Superbike class. The move is huge for both Honda and MotoAmerica as it brings much needed OEM support to the series and puts another contender on the grid that has been dominated by Yamaha and Suzuki riders for a long time now.

Gagne was the 2014 AMA Pro Daytona SportBike Champion and earned the 2015 Superstock 1000 title with Danny Walker and his RoadRace Factory Team in 2016. Gagne then finished tenth in the standings at the end of his first season in the premier class. The newly named team will still be ran by Walker, with technical support from American Honda.

"We can't wait for the season to start,” said Danny Walker, Genuine Broaster Chicken Honda Team Manager. ”Jake has proven himself capable in the liter class and we are excited to see what he does with the all-new Genuine Broaster Chicken CBR1000RR. The MotoAmerica series continues to grow and we are proud to be the team that brings Honda back to the paddock. This is going to be a great year for fans of the series."