The One Moto Show 2017 - Eight Years of Cool Customs 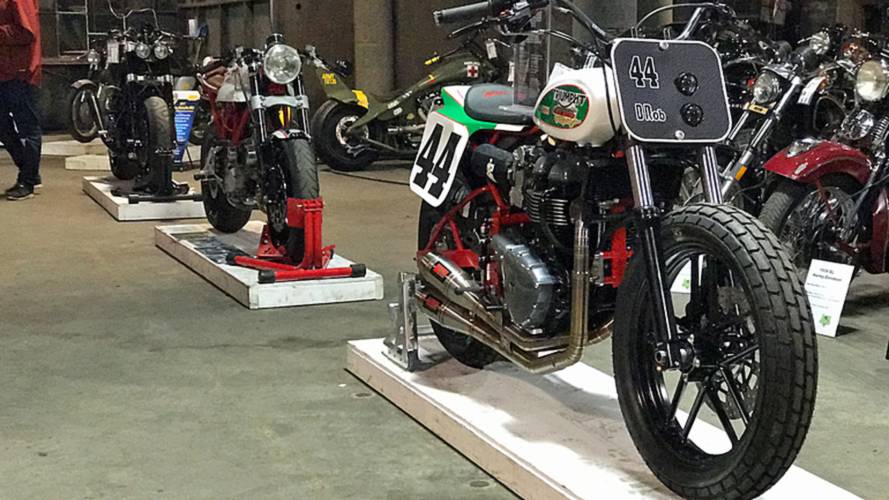 For eight years The One Moto Show has been a staple in the custom builder scene in the Pacific Northwest. Come check out what you missed in 2017.

In only eight years, The One Moto Show has grown from an upstart gathering for custom bike builders in the Pacific Northwest intro arguably the coolest motorcycle industry event of the season. With its steady assault on your senses – starting with the aroma of burnt oil, welding slag, greasy leather jackets and carnival food in the background – all the way to the visual assault laid down by a neverending stream of skinny jeans, well-manicured hairdos, and a whole bunch of amazing handcrafted motorcycles: The One Moto Show is the place to be.

This year, The One was held at a huge abandoned warehouse stuffed to the gills with hundreds of motorcycles vying for the grand prize, and a bunch of vendors – from the mainstream gear giants at ICON and Alpinestars on down to the upstarts from Feral, New Church, and Hovercraft. It was three days of moto mayhem that started when the doors opened on Friday and ended on Sunday with the RSD Super Hooligan dirt track races down the highway at Salem. If you weren't ready to ride by the end of this weekend, then buddy, you had better check your pulse.

One Moto began eight years with a bunch of locally built bikes and regional vendors looking to create an event that captured the spirit of the latest custom bike scene. This is where you would come to show off your handbuilt motorcycle and go head to head with builder legends like Roland Sands and Deus Ex Machina. Back then there were only a few hundred locals who had heard about the show and while sipping some See See Coffee; the rest of the industry was not yet taking notice. The grungy custom scene was starting to hit its stride and The One offered local builders a place to show off their unique custom motorcycles, gear, and taste in music. Seven years later, there were more than 300 bikes entered into this year's show, along with numerous display bikes and booths. Official attendance figures were in excess of 15,000 in total – more than 5,000 people per day. I may have forgotten to mention that The One is free to the public, too.

The folks who came to be a part of the event were as diverse as the bikes they were checking out. The hordes of young men were easily identified by their stylish hairdos, tight jeans, well-manicured facial hair and laid-back demeanor were mingling with patch-wearing biker clubs including the notorious Mongols, the Sons of God, Cretins, and other groups of various philosophies. In addition to those big burly bikers was a contingent of female riders who stood out from the crowd with their combination of classy gear, biker-friendly hairdos and bubbly approach to representing clan estrogen. Lost in the mix were a bunch of regular riders; dads, moms, kids, grandmas and grandpas. They were all there at the One Moto Show and by my observation, were all having a real good time.

Outside there was a half dozen amazing food vendors tempting the palate with signature dishes. Smoke from their busy grills seemed to always sneak through the front doors, tempting folks to get outside and grab a Zombie burrito or some grilled goodness from Chicken and Guns. I'm sure there was gluten-free cuisine somewhere in this roach coach extravaganza but I didn't see it. Not everything is as politically correct as you might expect from an event held in the heart of Portlandia.

The bottom floor was home to the sound stage and vendor displays while upstairs was the home for the majority of the show bikes. On one end were the traditional custom bikes, choppers, antiques and home-built weirdo-cycles you'd expect to see. The next room had the more sporty builds. These were the scramblers, flat trackers, and builds based on mostly performance machines: Ducatis, Guzzis, Triumphs, Yamahas, and Hondas done up as flat trackers, classic racers and that sort of ilk.

Beyond those were the dirt bikes. This collection was not nearly as huge as the other two but there were amazing examples of classic off-road motorcycles from many different brands. Lining the hallways between those showcases were some sweet race bikes from local speed merchants EDR Motorsports, one-off builds from Roland Sands, and a few of low-buck odd duck bikes, which probably benefited in the judging process by not being stashed in between the more prominent builders in the main showrooms.

Overall I was really impressed with the diversity in both the bikes and builders who participated in The One Moto Show. Seeing a bright orange XS500 done up as a Flying Merkel replica and 1928 Indian board track racer, alongside the water-cooled Harley-Davidson Street 750 from Suicide Machine Company is a nice contrast in styles that spans more than a hundred years of various motorcycle technology and design.

Then there was the difference in materials chosen for various bikes. On one hand you had an NX650 stripped clean of all bodywork and paint, exposing its big single-cylinder engine and low-tech dual-sport heritage in an ultra-clean build that I found to be quite cool. It was sitting right next to a classic CB160 that ditched the majority of its steel-painted bodywork for some clean, tucked leather accents that extended from the seat all the way onto the sides of the gas tank.

The walls of The One were also filled with examples of motorcycle art from a bunch of local talent. From photographers to painters, the motorcycle-inspired art was well represented with a variety of genres that ranged from conceptualized drawings all the way to hand drawn images that anyone of us would like to have hanging on the wall of our house, or garage.

The One Moto Show is held annually in Portland, Oregon, every February and it is a great way to get you in the right mindset for the riding season. If it is motorcycle related, this place has some… ah... thing that will appeal to your senses. Bikes, babes, dudes, foods, big-bad bikers, vendors, and musicians: they’re all here. Regardless of what you ride, where you ride, or why you ride, there's something for everyone. It doesn't matter if you're one of the cool kids or a one-percenter, because The One Moto Show is where they can all come together and enjoy the common lifestyle while checking out a bunch of really badass bikes.