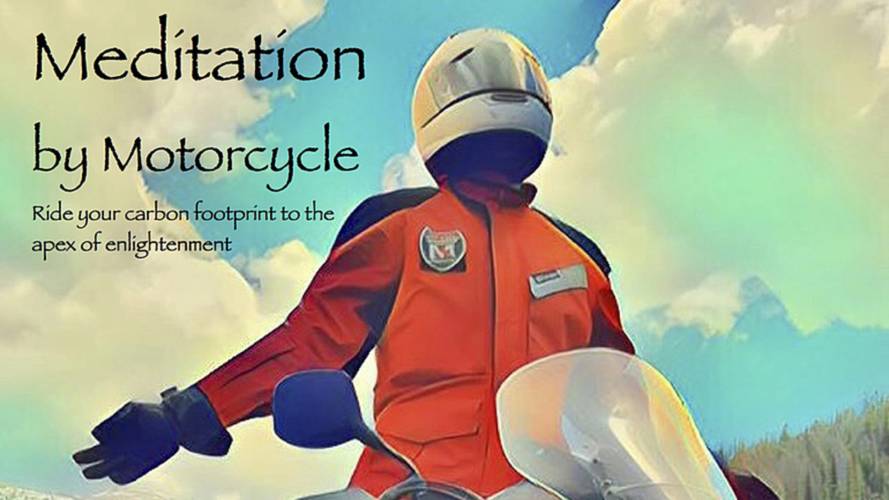 Meditation by Motorcycle, the new book by John P. Metzger, owes a debt to Robert Pirsig’s Zen and the Art of Motorcycle Maintenance. Where the subtitle of the 1974 treatise was “An Inquiry into Values”, Meditation might be subtitled “A Throttle to Enlightenment.”

While Pirsig framed his thesis on the meditative aspect in the classical relationship between man and machine, Metzger’s premise designates the motorcycle as the primary tool in the “Motivation by Movement Movement.” Aimed clearly at middle-agers and older, but not without guidelines for novices, the basic lesson of the book is that you’ll feel much better if you get off your ass and go ride a motorcycle. Even better if you do it well.

The meditation component of motivation in motion is more finely defined in the book, and not to be confused with any meditative form designed to empty the mind completely. For, as most us have surely witnessed, an empty mind on a motorcycle is a frightening thing to behold. The goal of the mindful rider is to reach the level where the precise action at the right time becomes second nature, the right move without thinking about it.

Metzger’s moto mantra derives from what he terms the union of Repetition and Rhythm, with corollaries in sports like golf, in which the exact repetition of a rhythmic motion can produce that wonderfully satisfactory result. The author shifts from golf’s poetry of physics to a rant on extreme sports and their devoted media spectators, then to the evolution of his own educational perspective on Zen and the art of motorcycle motion.

“After a lifetime of skateboarding, skiing, bicycling, driving fast cars, and riding motorcycles, I finally figured it out. My Nirvana Moments emerge from… making turns. We not only owe a debt of gratitude to the Frisbee-playing hippies for mainstreaming Meditation by Movement, we must also thank the cavemen for inventing the wheel. The supreme carving tool, the wheel is key to the Holy Grail we seek in meditative movement: the corner. And as it turns out, two-wheels win first place for the most rewarding turning experience (four-wheels, skis, hulls, boards and blades are fun but remain runners-up). The Corner Gods thus deem – the finest, inner peace-producing turns are carved by motorcycles.”

Not that the book becomes a long litany of philosophical ruminations or distressed metaphors on the relationship between eastern religions and road smarts. In fact it soon becomes more of an instruction manual, with explicit do’s and don’ts on the road to nirvana. The lessons include apexes early and late, looking through rather than into the turn, how to deal with traffic, scanning, situational awareness, and passing etiquette.

Metzger manages to combine the techniques of a coach, den mother, safety instructor, and psychologist. While most of his curriculum will be familiar to veteran riders, it could prove useful for those who haven’t ridden for some time, and serve as a primer for novices and those moving up the adventure bike scale. The author is also founder of Colorado’s Motomarathon Association, whose annual event is set for Sept. 8–11, 2017, and features several 300-400-mile routes in the Rocky Mountains.

Meditation by Motorcycle is available as an eBook on Amazon at $4.99, and illustrated paperbacks are scheduled for mid-July. For more information visit motomarathon.com

The latest book from Tod Rafferty, The Pismo Calamity, includes a contemplative clam, a nod to beveldrive Ducatis, and an enlightening ride on the Big Sur coast road. Available on Amazon.