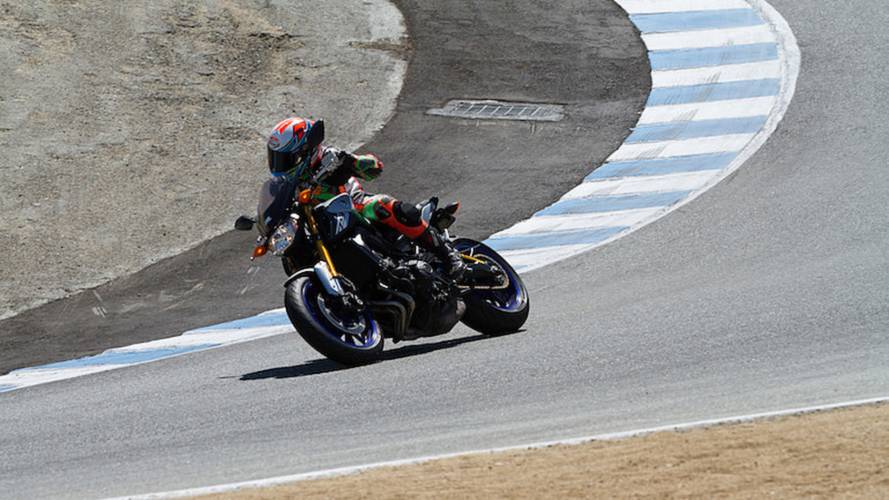 Our pal and ace racer Laura took her FZ out to Laguna Seca for a PIrelli sponsored track day and lived to tell the tale.

Even though MotoGP doesn’t race at Laguna Seca anymore, other world-class motorcycle organizations like World Superbike (WSBK) still grace its pavement. On July 7 to 9, WSBK headed to Laguna Seca for round eight of its series. Chaz Davies went on to win the first race on Saturday, and Jonathan Rea took the second race on Sunday. After that second race, the track went cold and the majority of workers, spectators, and racers headed off to their next destination.

However, some big names stayed behind and the track didn’t stay cold for too long. That following Monday Pirelli, the tire provider for WSBK, decided to stick around and invited dealers, salesman, and media folks to ride the one-of-a-kind track.

What was a bit surprising was a no-sound day. Unfortunately, Laguna Seca usually has a strict 92 decibel limit, which makes it difficult for a lot of us normal folk to ride our bikes on the track (my bikes are always fine, my husband’s, however...). What made the day better was that there were dealers like Kawasaki and Yamaha were there with their demo bikes, along with super cool people like Moto2 champ Toni Elias – who offered two-up rides for the brave – MotoAmerica president Wayne Rainy, and actor Keanu Reeves.

This is Keanu Reeves heading out on track. He's also all about that two-wheel life.

As if that wasn't enough, what made the day the raddest of the rad was the fact that Pirelli was giving away a new set of shoes if we brought our own bikes. Lucky for me, I was able to take advantage of their largess since I only live about 60 miles away from the track.

Getting to the Track

It’s never a good idea to ride your bike to the track for track day, because if anything happens to it getting home will be difficult. Therefore, before I got to enjoy the Pirelli-sponsored track day, I had to transport myself there via Burt, which wasn’t so easy. You see, Burt is my husband’s 1976 Ford F250, and Burt has his quirks — he tends to drift and it's a bit hard to get him to go in a straight line since the steering wheel feels very loose. This was the first time that I would pull our 7 x 12 trailer that housed my FZ-09, so I was a bit nervous. Thankfully, despite not being used to the 70’s school bus-esque steering and a few close calls, I’m still here to tell the tale of how my day went.

Once I got to the track, I pulled up right next to the Pirelli tent so I could get my new rubbers. They mounted a set of Diablo Rosso III tires, which is a DOT tire based off Pirelli’s Diablo Supercorsa. These tires were meant to tear up both the track, and twisty real world roads. I was, and still am, super stoked to get a set to try out first on track, especially since I raced a full season on the Diablo IIs and really liked them.

What a beautiful sight!

Can't go wrong with a fresh set of Pirellis!

Getting onto the Track

It’s been three years since I’ve been to Laguna Seca, and even then it was when I was getting acquainted with my little Ninja 250. So, when I got out on the track for the first time that day, I had to re-learn it all over again.

Laguna Seca is a historical track with some of the world's most famous corners. Built in 1957, the track took 60 days to complete and was initially 1.9 miles long. In 1988, the infield was added which increased the track's length to 2.238 miles. Even though the track became “longer,” it’s still a short track when you compare it to others around the world. The top MotoGp racers can make it around the entire track in just one minute and 21 seconds. I do not have an ounce of talent that the top athletes do, so I mainly took my time the first few sessions out to get acquainted with Laguna and the new Pirellis.

Where am I going? Oh right...I mean left!

After a few laps, there were turns that I was more comfortable opening up the throttle for, and others that I parked it in the corner (I’m looking at you turn 11). The ones that were doable were turns four, five, and six. The corkscrew took a while to get used to, but it’s a fun turn, regardless of what speed you’re going at. Once you exit the corkscrew, you open the throttle and head into “Rainey Curve” (turn 9), which was another one of my favorite turns.

Getting into the Corkscrew can be tricky, but getting out isn't so bad!

All the while, the Diablo Rosso III tires were smooth as butter. As I previously mentioned, I’ve raced on the Diablo Rosso IIs and loved those, so it’s no surprise that I was pleased with the threes. What I’ve always loved about the Diablo tires is the grip—I could push hard in the least ideal conditions (greasy or wet track) and they stuck. Even though I didn’t necessarily push the Diablo IIIs too hard on my FZ, I was able to turn the bike in without a problem and I got good feedback from them.

We only had five sessions out on track, but they were five fun ones and it was definitely a great way to spend on Monday. Alas, once all the fun was over I had to pack up and start my journey home in the potentially murderous Burt.

We made it to the track and back home in one piece!

I thanked all of the Pirelli staff and other vendors who stayed behind to offer and showcase their products, and I had a smile on my face the whole way home despite Burt's vagaries. Even though I spent more time figuring out which way Laguna Seca twisted and turned, I enjoyed my time being around folks, including a famous actor, that are passionate about the two-wheel life.