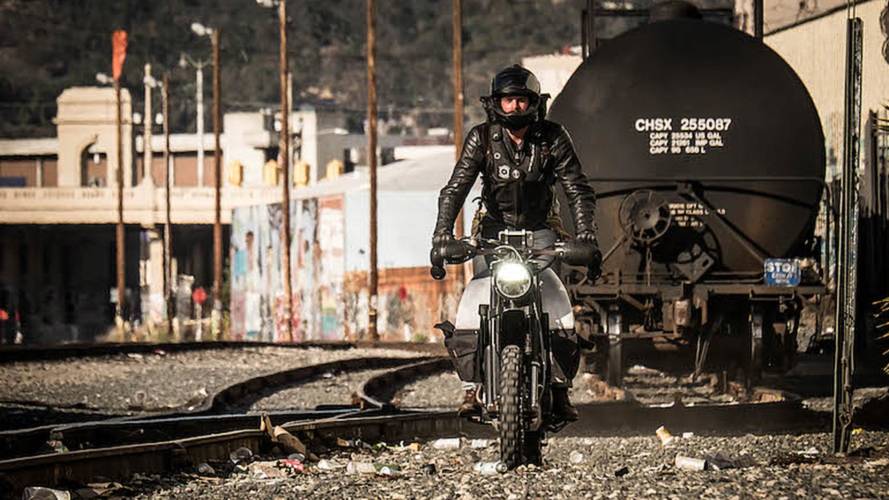 Is it an ADV, an enduro, or a cafe racer? Find out what the REV'IT! #95 custom bike is like to ride.

I have worn and tested a lot of different motorcycle gear and the past couple years and I keep coming back to Rev’it as my go-to for adventure and urban gear. From day one it always seemed to fit my massive frame and perform admirably. When I found out REV'IT! had built an adventure bike I had to ask them for a chance to ride it. I ended up spending two rainy and muddy weeks playing around with this machine.

There are no dials, no instruments, no fuel gauges – just man, motor, and the world. The REV'IT! #95 does a magnificent job in tapping into those primal feelings sought after by adventure motorcyclists.

The REV'IT! #95 began its life as a KTM 950 Super Enduro Erzberg Edition but evolved to include a massive 12-gallon custom fuel tank, Christini all wheel drive system (more on that in a bit), a wild cafe seat, naked back end, and custom-made exhaust.

The 942cc 75-degree V-twin puts out around 98 hp and the power shows as the REV'IT! team was able to lighten the overall weight of the stock KTM by 15 lbs. This reduction in weight comes from the elimination of the original subframe and replacing it with 7/8-inch chrome-moly tubing with an .049-inch thick wall, and TIG welding it to the stock chassis. This modification also allows for the subframe to remain very strong.

The electronics were relocated and organized under the seat in a custom aluminum electronics tray and a lightweight lithium-ion battery replaces stock. Additionally, many of the stock parts – like plastic cowlings, seat, and exhaust systems – were scrapped and replaced entirely with lighter components.

Standing out visually is the almost-out-of-character brat-style seat. The designers at REV'IT! saw it as a way to pay homage to their urban line of clothing, going so far as to wrap the top layer of the seat in the same leather used in the REV'IT! apparel line.

When I went to pick up the bike, I spent 10 minutes trying to find the ignition; it is inconveniently tucked under the handlebars. I felt like an idiot but allowed that feeling to fade. I mounted this franken-bike dressed half like a hipster and half like an adventure motorcyclist with my REV'IT! Sand 2 jacket, selvedge denim and Red Wing Boots. Appropriate in my mind for a custom bike that looks like the result of a ménage à trois between an ADV, enduro, and café racer. Whatever you want to call this bike, I immediately felt at home. The wide handlebars and knee cutouts in the tank are close to perfect for someone of my height; the throaty exhaust is a devilish symphony to the ear; and the narrow seat and aggressive rake instantly made me feel as though I was atop a beastly supermoto.

As I pulled out of the lot, sprinkling rain began to fall more more steadily. But the rumble from the exhaust begged for an open throttle. And open it I did. Torque in first gear lent itself to a nice power wheelie. Second gear, more of the same with a little dumped clutch. Oh man, this bike was feisty. Soon, though, I put the front wheel down – allowing my rational mind to override primal desires. The rain came a little harder and on the oil-soaked streets of Los Angeles, I could feel grip wavering at the higher speeds and in corners. Finesse was required, outright ballsy fun restrained.

But rain, of course, means mud. I found a piece of untouched earth and began to play. Once removed from the pavement, the REV'IT! #95 becomes ultra capable and balanced. A vicious dirt bike on steroids. A pure adventure motorcycle.

Thereafter I could not live without dirt. I was like a heroin addict searching for his next fix. Even in the city, a voice inside me compelled me to look for dirt at every corner even if it was just a patch. I wanted to feel the tires spin, shake the back end loose and hear the engine cry. Once, on my way home I found a Christmas tree lot and began doing donuts and power slides.

I needed to get a full day fix so I fueled up and went out to Rowher Flats OHV to let this dog off its chain. Looking at the massive fuel tank, one might believe the bike to be difficult to manage, but it's entirely the opposite. It remains well balanced at speed and in low-speed maneuvers. The knee cut outs in the tank allow for near perfect knee hugging, whether seated or standing.

Where this bike really shines is when the 1WD / 2WD switch is flipped to the 2WD setting. Utilizing a Christini all-wheel drive system, a secondary chain attached to the motorcycle’s main transmission drives the front wheel at a lower rate than the rear wheel.

The result: high-speed power slides are easy. As the rear wheel loses traction and begins to slide, the front wheel pulls the bike forward. Hill climbs are also easy. Approach a hill and pin the throttle; the bike climbs effortlessly. Sand and mud are no longer the worst surfaces to ride through. It had rained the day before I went to Rowher Flats, so most of the trails were super muddy. The AWD system is an awesome aid in difficult and loose terrain.

Back on the highway, the bike is a tad buzzy at higher RPM, even in 6th gear. But you know what? That’s OK. I never cared because this bike’s happy place is in the dirt. I could only imagine what would happen if we slapped some road tires on this machine and ran it up the coast.

I have to give a big thanks to REV'IT! Sport International for loaning me this bike. They've built a hell of a machine.

Usually Rides: Anything with two wheels. Sam is a capable rider on pavement or dirt. He is generally relegated to street riding and commuting living in Los Angeles but yearns for dirt or adv riding whenever possible.