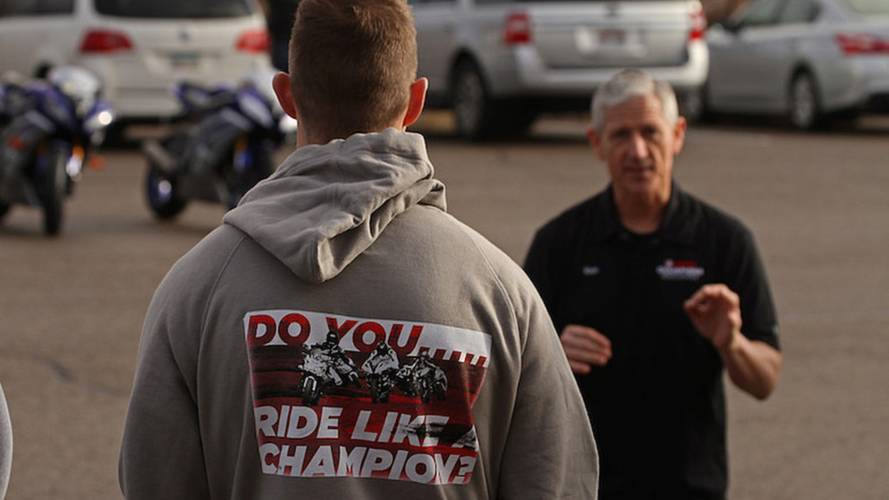 Want to improve your riding? One of the best ways to do that is to attend a track school. Laura Llovet checks out Yamaha Champions Riding School.

I couldn’t believe (and still can’t) I won a two-day Yamaha Champions Riding School (YCRS) at the Femmewalla track day raffle. Track schools are one of the best ways to improve your riding, something I was I desperate to do because I felt my skills weren't improving as much as I wanted.

For example, last year’s racing season brought a lot of highs and lows. But more of the latter occurred, causing my self-esteem to take a big hit.

It’s been a while since I’ve been to a riding school, and even though I didn’t necessarily forget the things that were taught then, I definitely needed a refresher on certain skills and techniques. My goal is to get faster while also reducing my chances of crashing, and I feel YCRS is the perfect program to help get me get there.

YCRS came about shortly after the Freddie Spencer High Performance Riding School closed down. Nick Ienatsch, a former AMA 250 GP racer, was an instructor there for 12 years and decided to keep the program going. Nick is now the lead instructor at YCRS and he coaches alongside with other top-tier motorcycle riders and racers.

Yes, even you sir. You’re not too cool for school!

I signed up for the two-day school at Buttonwillow Raceway, which is located 26 miles west of Bakersfield, California. This is also a track that I race at often, and competing in the AFM (American Federation of Motorcyclists) season. Buttonwillow is a flat, semi-technical, fast track, and it’s one that I’ve struggled the most with – mainly due to a few challenging corners.

I mentally prepared for the two-day school by becoming a sponge: I wanted to absorb all the information provided and scrub out the rough spots in my riding. I also prepared by re-reading a few chapters from Nick Ienastch’s book, Sport Riding Techniques: How to Develop Real World Skills for Speed, Safety, and Confidence on the Street and Track. Doing this definitely helped since it gave me an idea of what topics and drills would be covered.

This picture is totally not Photoshopped, by the way...

I was excited as all 22 of us piled into the classroom. I was ready to learn! Nick kicked things off by introducing the other instructors, which included Ken Hill, Kyle Wyman, Chris Peris, and Mark Schellinger. All of these guys have raced AMA, have a bunch of No. 1 plates from various road racing associations under their belts, and are street riders.

The first day’s classroom session was a bit long, and the instructors were aware of this. Even Ken said it’s like drinking water from a fire hose. There was so much to take in, but it was information we all needed to hear before we suited up. We eventually headed out into the parking lot where the instructors discussed the 100 points of traction on a tire, as well as showing us how the brakes help decrease your turn-in radius.

When Ken speaks, you listen.

Prior to heading out on track, half of us piled into a van with Nick at the wheel, while the other half piled into another van with Ken driving. Nick demonstrated how the brakes helped get the vehicle (bike or car) pointed in the right direction. He also demonstrated various degrees of brake pressure and smooth inputs. Even though I wasn’t riding, I really liked this exercise because it gave me a great visual of how to apply the brakes going into a corner.

Mark popping in to further explain the brakes.

After the van ride, it was time to get on our bikes. We were split into groups, and I got to work with Ken. Ken had us take all of the information thrown at us earlier and had us focus on one to two components. He had me work on using my eyes—scanning up and down the track—and initial brakes and where I let off the brakes.

After instruction with Ken, we regrouped with the rest of the students to do various on-track drills. One of my favorite ones was when the instructors stopped us at various points on the track to give us riding suggestions. I also liked a drill where cones were placed at various locations on the track and we had to maneuver through them using brakes.

Toward the end of the day we were all filmed. During dinner, the coaches reviewed each student’s footage and discussed what we did right and wrong. For me, Nick said I wasn’t hanging off the bike enough; however, my lines around the track were great.

Overall, that initial feeling of being overwhelmed dissipated by the end of the day. I absorbed as much information as I could and started executing, so I felt that day one was a success.

On the second day, we started off with a shorter classroom session, which included Ken discussing how to focus, refocus, and eye exercises that we can do at home. The latter is to help move them and process information quicker when going at higher speeds.

On day one I rode my FZ-09, but on day two I decided to move to my small race bike (Ninja 250R) and was put in another group. We did a few short laps before we all congregated again for more on-track drills. Every one of us had to do the cone exercise again because we did poorly the day before. But fortunately, this time around, we all did much better.

We were filmed again before lunch time. Like before, the coaches went over our footage and provided feedback on our riding. Like the previous day, I was applauded for my good lines, but I was still turning too long at a few corners where I needed to pick the bike up sooner.

After lunch we continued our champ training. We did more drills, and my favorites that day included more braking drills. There was one in particular where we had to trail on the brakes 10 more feet longer because it made me realize that I could brake lighter and longer. Another favorite of the day was an exercise where you tightened your core when rolling on the throttle. Doing this drill improved and smoothed out my inputs because it allowed me to take weight off my arms. This lessened weight on the bars helped the bike go where it needed to with just my braking and throttle inputs—that’s it.

We ended the day doing something Nick called Champ Laps, which required us to ride our motorcycles in an unconventional way every lap. For example, I was instructed that my left clip on fell off, so I had to ride my bike pretending that I didn’t have one. The YCRS coaches made us do things like this because there are real world situations where things go wrong while riding. I enjoyed this a lot because it helped me to quickly adapt to the problem at hand and apply what I’ve learned the past two days.

As stated earlier, YCRS truly is a program that benefits any and all types of riders. Even though I’m considered an “expert” rider, I still learned a lot in the two days there and plan on attending again in the future. Why? Because revisiting and seeing these techniques in action will never get old. To me, riding schools are not “one and done” deals; there’s always room to improve.

YCRS offers more than just the two-day program. They also offer a one-day school, street rider only classes, private and semi-private instruction, and Champion certified coaching. Having all these options not only help you pick the one that’s most budget friendly, but also cater to what you’re looking to get out of a riding school.

Whether it’s YCRS or any other riding program, I recommend signing up sooner rather than later— it can make riding two-wheels more enjoyable and even save your life.