Taking Hipster to 11: Gin Made with Harley-Davidson Parts 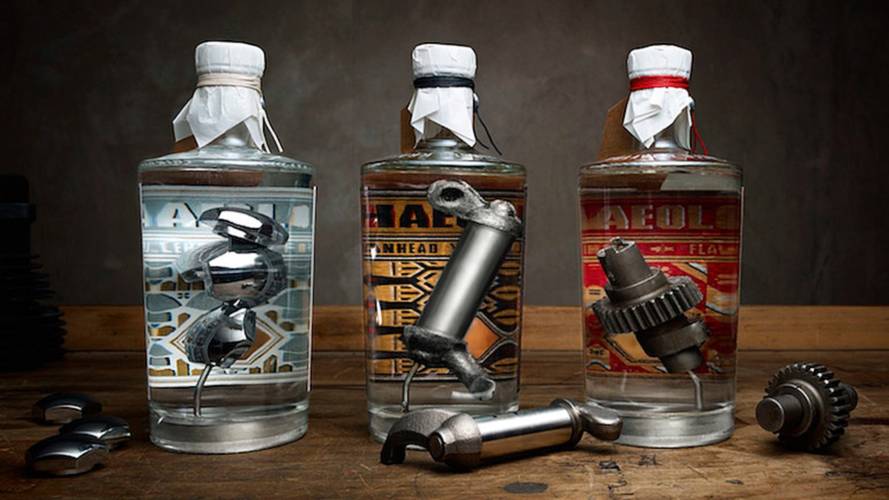 Many people love Harley-Davidson motorcycles but we can't help thinking this German rider is taking things a little too far.

While the stereotypical Harley rider is often characterized as a beer drinker, Uwe Ehinger (aka The Archaeologist) figured that the best way to preserve old Knucklehead parts was in gin. We're not entirely sure why.

But we’re not making this up: Ehinger's "The Archaeologist Premium Dry Gin" contains original Harley parts culled from bins and backwaters around the world. One may savor the flavor of a ’39 Flathead cam that was once rusting in a Mexican desert, or rocker arms from a ’62 Panhead from a village in South Korea, or screw-nuts from the final resting place of a ’47 Knucklehead in the mountains of Chile. Because... uhm... why not?

Ehringer has been a Harley-Davidson enthusiast for most of his life. From his website: “At the age of 17, Uwe Ehinger was infected with an incredible fever: the Harley virus. From that day on, he started a restless journey across the world to search the most remote garages, dilapidated scrapyards and dusty backyards for legendary lost two-wheeled relics. He became a legend - a motorcycle archaeologist."

The parts have reportedly been thoroughly cleaned prior to their immersion in gin, and sealed with a tin alloy so the liquor isn’t contaminated. Each bottle includes the story of where the parts were found, and their original serial numbers. And that Premium label isn’t just hype. The Archaeologist gin sells for US $1,000 and up, and the first batch is sold out.

“Every time I make a find of rare bikes, I wonder how to use every single part," Ehringer said. "Because they deserve to be preserved. That is where the idea for ‘The Archaeologist’ emerged: preserving the spirit of the old machines in an actual spirit and making it possible to experience the taste.”

Ehringer is now taking orders for the second bottling at the-archaelogist.com. Cheers.