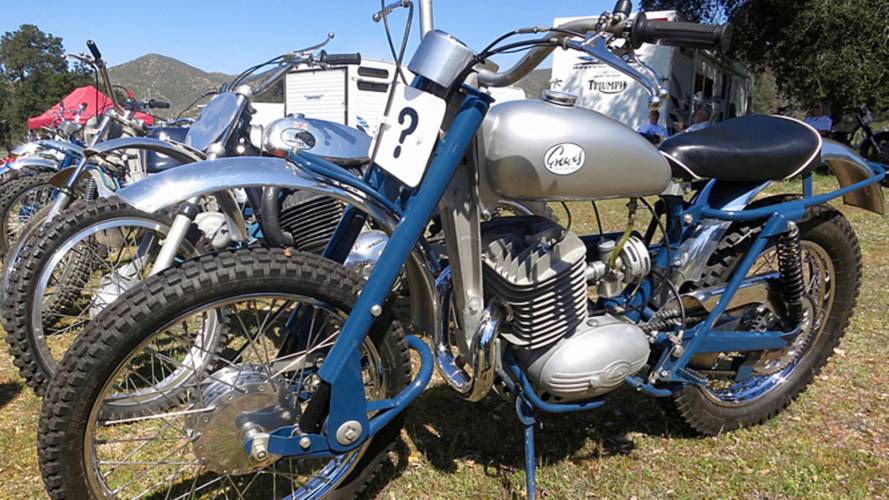 At a certain age (or an age uncertain) the nostalgia gene kicks in, and the chronic motorcyclist develops an abiding fondness for the machines of his or her youth. The more seriously afflicted adopt a near reverence for a particular brand, often an obscure one, such as Greeves.

While most millenials may not recognize the name, England’s Bert Greeves was an established builder of street and dirt machines in the ’60s and ’70s. After developing the three-wheeled Invacar for disabled drivers in the ’50s, the company began motorcycle production in 1953. The trials and scrambles models were easily distinguished by their leading-link front suspension and cast alloy I-beam front frame member. The second generation bikes were powered by a 250cc Villiers two-stroke engine.

The Challenger appeared in 1964 as a 250 and later added a 360cc version, capable in desert and motocross competition.

Greeves established a relationship with Queens University in Belfast to develop the off-road models. The leading link fork gave way to a traditional telescopic unit, and the frame moved to a conventional chrome-moly tubing design. The Challenger trail bike was replaced in 1969 by the Griffon motocross model with 250 or 380cc two-stroke engines. With the growing popularity of trials, enduros, scrambles and then motocross in the States, Greeves was well positioned in the market. The street-legal Ranger was created, and U.S. distributor Nick Nicholson perceived the marketing potential of putting good riders on the machines.

The Griffon replaced the Challenger in 1969, now in a Reynolds 531 tube frame with telescopic fork.

Motocross and “rough scrambles” were by then well established in Europe and the UK, where factory rider Brian Stonebridge had proven the Greeves’ merit in competition. The late Dave Bickers won the 250cc title in 1960, and Yorkshireman Bill Wilkinson won the British Experts Trail competition, the first time it had ever been won on a two-stroke motorcycle. In 1965 Jim Wilson, a 13-year-old southern California trials rider on a Triumph Cub caught Nicholson’s attention, who put him on a Greeves Anglia. Wilson logged 55 wins in a row, and soon moved on to a 250cc Challenger in local motocross events. By 1968 he was aboard the Griffon prototype, competing against John DeSoto, Lars Larsen and the growing ranks of pro motocrossers from Europe and the U.S.

The Grumph: A Triumph 500 engine will fit, barely, in a Griffon chassis for a bump in grunt.

Wilson, now 66, switched to CZ motocrossers in the ’70s when he couldn’t get parts for the Greeves. He remains active in vintage trials events on an Greeves Anglia owned by Tom Van Beveren (who has nine Greeves models), and plans to ride the CZ National Championship motocross sceduled for Marysville, Calif., in April.

Most of the Greeves faithful on the west coast gather annually at Mike Beanway’s ranch in Pozo, Calif., for a few days of nostalgia, catching up, swap meet, barbecue and informal trials competition. Mike’s spread includes a motocross track, and adjoins the Los Padres National Forest and the La Panza OHV area, offering plenty of trails and camping facilities. Not to mention its proximity to the Pozo Saloon, the favorite local roadhouse for off-road and pavement riders alike.

Ken Sykes, Nick Nicholson’s son-in-law, maintains an inventory of parts available to ease the inevitable symptoms of those suffering from Greeves disease around the world. Prescriptions can be filled at - kenny.sykes@nicholsonmotors.com or by calling (916) 933-2450.