Mees and Indian Make It Two for Two at Atlanta 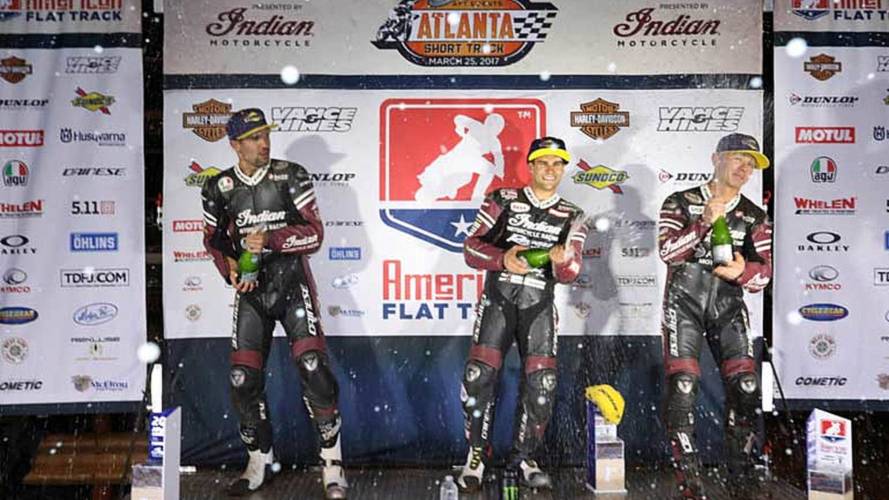 The Indian Wrecking Crew on the new FTR750 continued their winning ways at the Atlanta Short Track National as Jared Mees, Brad Baker and Bryan Smith owned the podium. Mees and Baker were first and second, with Smith finishing third.

In what has already been a historic return to flat track racing, Indian Motorcycle tallied five of six podiums to start the 2017 American Flat Track season. “To follow up last week’s win with such a dramatic finish, and have my fellow Indian teammates on the podium with me is an incredible feeling,” said Mees. “The team did an outstanding job preparing the Scout FTR750 for this track, and I rode as hard as I could until the very end. It’s an unbelievable start to a long season, and we’re excited to keep it rolling.”

Mees ran second for the majority of the race, stalking Sammy Halbert’s Harley and waiting for the right time to make a move. With six laps remaining, Mees dove inside of Halbert to move into first. The two veteran riders began a heated battle, diving inside of each other to exchange first and second positions. The battle ended with the two making contact, sending Halbert sliding into the wall and forcing a late red flag. The final five laps after the restart seemed merely a formality as Team Indian ran first, second and third.

Mees also achieved a personal milestone, scoring his first AFT Short Track victory to complete the elusive dirt track Grand Slam. By winning a mile, half mile, short track, and TT Mees joined exclusive company in the annals of flat track racing. Mees is now halfway to earning a dirt track Grand Slam in consecutive races, something that has never been done in the 64-year history of the sport.

“It’s for moments like this we reintroduced Indian Motorcycle back to flat track racing,” said Gary Gray, Product Director for Indian Motorcycle. “We’re extremely proud of the team and thankful for all the preparation and execution, but it’s a long season and there’s plenty more racing.”

For Baker, it was sweet redemption to take the number two spot on the podium after a rough Daytona. “It was a great night. Definitely a lot of gratitude and a good feeling to come back from what happened to me last weekend,” Baker said. “So it feels good, and it’s a part of history too what we did tonight – a three-way Indian Motorcycle podium. So hats off to Jared (Mees) and Bryan (Smith) for riding really well, especially Jared. He finished his grand slam this weekend, so that was pretty cool for him.”

Smith holds the points lead going into the Charlotte Half-Mile this weekend. “I wanted to go the other way on the podium and get a win, but to be right there in the points is good,” Smith said. “The ovals are getting bigger and I like the bigger ovals.”

Halbert started at the back of the 18-rider field for the restart before shooting through the pack to finish an eventual sixth. He trailed fourth-place Briar Bauman ( Zanotti Racing Harley-Davidson XR750) and fifth-place Jarod Vanderkooi (Richie Morris Racing Kawasaki Ninja 650).

After winning the Daytona TT in dramatic fashion by taking the lead in the final turn before the checkered flag, Dalton Gauthier ( Estenson Racing Yamaha YZ450F) left nothing to chance in Atlanta. The young Pennsylvania native won in dominant fashion, making it two in a row in AFT Singles competition. Gauthier won his heat and semi before leading every lap in the main event – which was extended by a late-race red flag.

Shayna Texter (Richie Morris Racing Honda CRF450R) finished third in an up-and-down event. After leading every lap on the way to a win in her semi, Texter dropped to 10th on the start of the main event. After working her way up to sixth before the red flag, she had a strong restart to capture the final podium position.