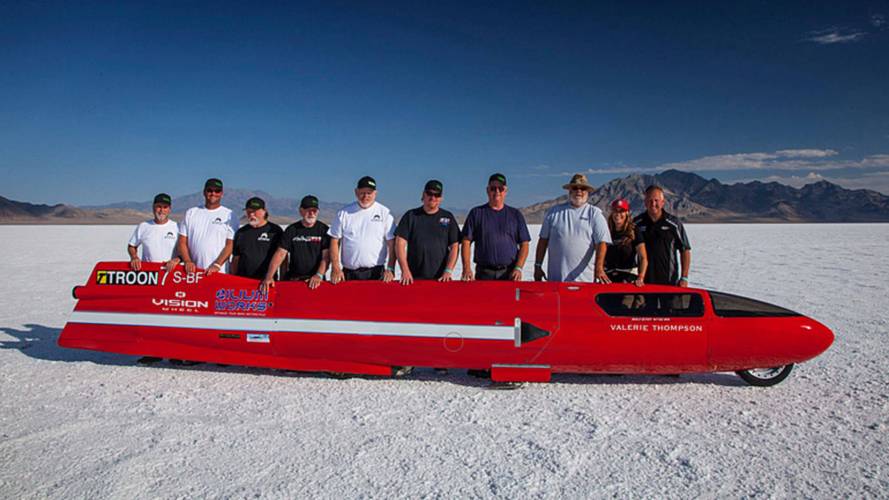 Team 7 owners Jon Jans and Joe Harrelson seek to recapture the title formerly held by Manning in 2009 with a run of 367 mph. Valerie Thompson is a seven-time land speed record holder and the first female to join the Bonneville 200 mph Club.

The quest to regain the title will be filmed by P-51 Pictures and Executive Producer for the land speed-racing documentary “Rockets and Titans.” scheduled for worldwide theater release next year. More than 20 technicians will be recording the team’s activities both on the salt and off the track. Thompson was asked if the film crew posed any distraction for the record attempt.

“Believe it or not, no,” she said. “The film crew is very professional and easy to work with. More importantly, I’m delighted land speed racing will get a worldwide stage through this documentary. It’s excellent exposure for sponsors like TROON Inc., Vision Wheel, ilium Works, Wheels Through Time and who make it possible for us to chase our dreams.”

Thompson stunned the racing world at last year’s trials with a speed of 304.263 mph piloting the Manning-designed “7” Streamliner on only her fifth run, becoming the first female rider over 300 mph and earning the Fastest Time of the Meet award. She has posted records on both Harley-Davidson and BMW machines, and this would be her first in a streamliner.

“I set my first record at Bonneville in 2006 and fell in love with land speed racing where you can keep the throttle open and push the equipment to its ultimate limit,” she said. “I’ve prepared for this moment since then, so I’m anxious to get back on the salt,” said Thompson. “With Denis Manning leading the best team I’ve ever worked with, I know the bike has the power. It all comes down to track conditions, weather and me hitting my marks.”

Denis Manning started racing at Bonneville as a teenager, earning his first world speed record at age 24 as builder of Cal Rayborn’s 1970 entry, reaching a top speed of 265 mph. “I’ve pursued this dream with my family for over 40 years, a dream I hope to fulfill with Team 7 Racing and three generations of Mannings,” he said. “I’m confident we’ve properly prepared the vehicle, especially considering the expertise of Team 7 owners Jon Jans and Joe Harrelson who are ‘best in class’ machinists and builders. I know Valerie is more than ready. She dreams about Bonneville as much as I do.”