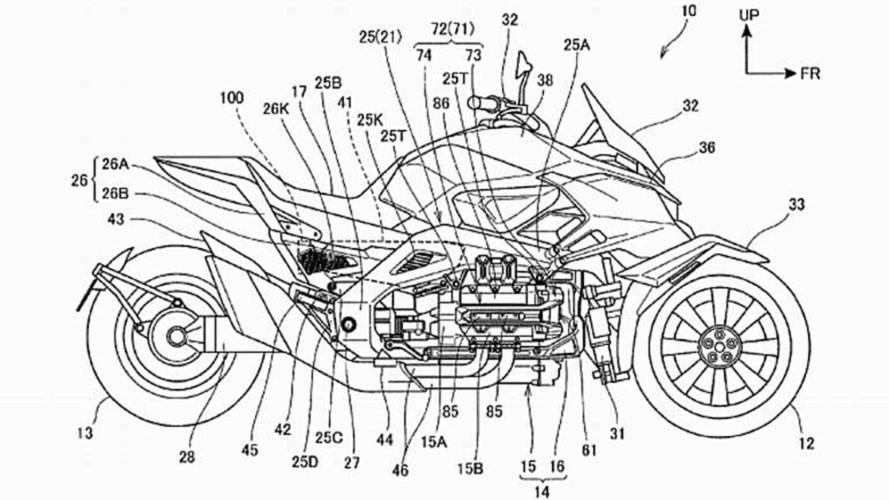 Honda has filed a patent for a three-wheeled Hybrid Electric Vehicle that would go head to head with the Can-Am Spyder.

According to a patent filed today by Honda Motor Co., Ltd, there is a three-wheeled Hybrid Electric Vehicle that has been in the works for quite some time now.

At first look, the new contraption features a pair of narrowly placed front wheels, similar to a Can-Am Spyder, but more in line with a Piaggio MP3 scooter based on its narrow width across the front. It is powered by an opposed four-cylinder engine with the electric motor placed directly on the front of it.

By locating the electric motor strategically at the front of the vehicle it allows the engineers to take advantage of the natural flow of air in an effort to keep the engine and motor cool. Which, of course, is the big trick in the entire process. And this is where the innovation begins. The basis for the patent is so intensely centered-around the technology developed for cooling both the motor and the engine that it seems there has been quite a bit of research and development poured into this aspect of the project.

To summarize how a Hybrid Electric Vehicle (HEV) works: you have a vehicle with both an internal combustion and an electric motor, connected at the crank so the drivetrain remains the same. The engine uses gasoline as its energy source while the motor is coupled with an electric generator that supplies power to it, through a rectifier.

The trick is keeping them both cool enough to maintain peak operational efficiency and avoid power loss due to excessive heat. This is especially difficult when you have a limited amount of space to work with.

After digging through the patent paperwork the primary focus appears to be dealing with the ducting and the mechanisms that control airflow across the motor and engine. The bodywork is designed with the intention of moving as much air across these components as possible.

On paper (and, of course, that's all we have right now), the vehicle looks pretty good. It has a very Honda-like appearance, with the sort of angular bodywork that's the fashion of many current Honda motorbikes. The front looks like it was sourced directly from the Autobot development program, Prime Division.

The swingarm is a single-sided unit that looks similar to what you might find on a VFR, and the opposed cylinder configuration has been used extensively in the Gold Wing and CTX1300, although it is liquid-cooled version on the 'Wing. Pure Honda.

We feel there’s no doubt Honda is about to introduce the hybrid concept to the powersport industry, which is huge news for anyone taking the time to read this article. Honda doesn’t do anything half-assed and the company's famously meticulous in its decision making.

Imagine what might lay ahead if technology allows the HEV concept to be applied to big bikes like the Gold Wing. Once Honda figures out how to tidy up this whole HEV plan and stuff it into a two wheeler, we will have a true game changer.

Until then, we will be anxiously awaiting the arrival of the HEV-3 (That’s the name we’re giving it). It’s great to see hybrid tech making its way into our industry – now we just need to see how this all plays out and how the consumers react to it.