British Man Builds CBR-Powered Bumper Car – Because Why Not? 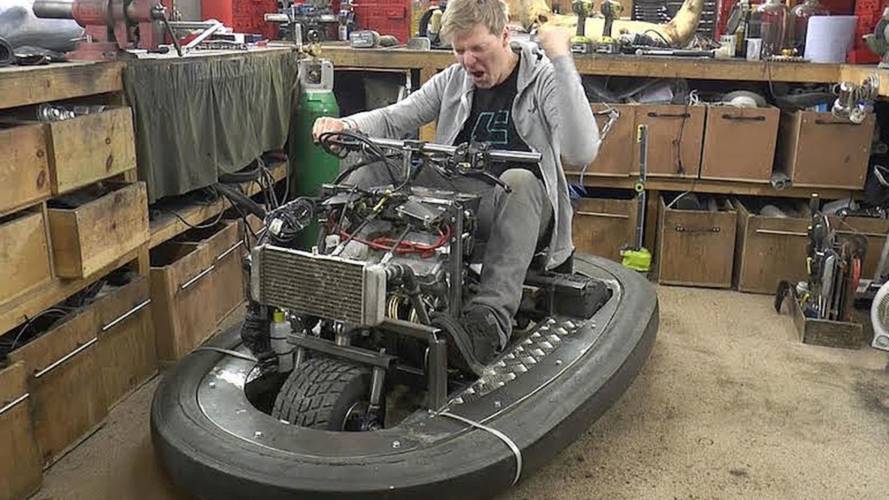 Check out this ridiculous bumper car, powered by the 100hp engine of a Honda CBR600RR. That's definitely a health and safety risk!

British Man Builds 100hp Motorcycle-Powered Bumper Car – Because Why Not?

A British man known for creating ridiculous builds has been at it again, this time meshing a motorcycle with a 1960s bumper car.

The idea officially came from the team at "Top Gear," who asked the creative wrencher to build a vehicle that would be piloted by the Stig (the program's mysterious and seriously fast white-clad driver). So, obviously, he chose to power a bumper car (which the Brits refer to as "Dodge 'Ems") with the screaming inline four of an old Honda CBR600RR.

Furze started with a vintage 1960's bumper car, which he gutted in order to make room for the Honda's 100hp powerplant. A custom chassis was fabricated to compensate for the additional weight and extreme stress – which the bumper car was blatantly not designed to endure. From there, the gas tank, battery and other vital components were mounted.

Motorcycle hand controls were installed instead of the traditional pedals found on most four-wheeled vehicles. A clever system and placement was utilized in place of standard motorcycle foot controls, which, for obvious reasons, required modification for use in a bumper car. Once the little car was complete it was time to hit the test strip and unleash the little vehicle with a ridiculous power-to-weight ratio.

After taking it for a quick spin and a few donuts Furze passed the proverbial keys over to the man for whom the machine was built for: the Stig (Wait. Who says the Stig is man? Does anyone really know? –Ed.). The superhuman driver managed to push the little car past 100 mph, making this one of the most deceptive and all-around fun vehicles to grace YouTube in 2017. Seeing the vehicle being driven by the legendary driver is obviously silly but nonetheless entertaining.

While this entire project was clearly just for fun, it's always fascinating to see what can be done with a little creativity and some mechanical knowhow. We can safely assume this won't be the last insane creation we see from the imaginative Englishman. Hard to imagine what he'll come up with next.