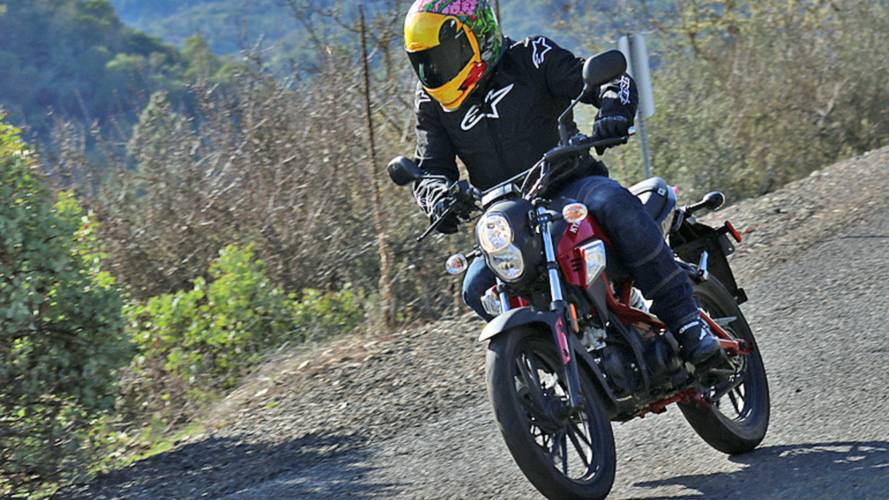 The 2017 Kymco K-Pipe is a scooter in motorcycle clothing. It's small, cheap and fun to ride... for the most part.

There seems to be a small-bike craze making a resurgence these days and it’s opened the doors for manufacturers to brining us itty-bitty bikes like the Kymco K-Pipe. Basically, the K-Pipe is a good looking scooter with a semi-automatic clutch and 17-inch wheels.

It’s is a capable beginner bike as much as a solid all around in town commuter. The US $1,999 K-Pipe is a blast as long as you don’t need to go over 55 mph and that’s exactly why Sammy Hagar’s "I Can’t Drive 55" song lyrics were constantly playing in my head while I was riding this thing.

Kymco’s K-Pipe is kind of like a Honda Grom: full size wheels, skinny tires, and a unique look that makes stand out in a sea of step-through scooters and shrunken superbikes. The large wheels help it to handle well on tight curvy roads and since it doesn’t feel as small as the Grom, you might even feel like you’re on a bit of a bigger bike (but you’re really not).

The K-Pipe is powered by a carbureted, air-cooled 123.7cc SOHC engine that has electric start with a back-up kick-starter. The engine is housed in a steel trellis frame with matching, tubular steel swingarm. It’s wrapped in minimalist yet sporty bodywork with a spiffy headlight and has an LCD dash that’s both small and quirky. Our test unit’s dash would regularly glitch-out by flashing all the LCD nomenclature off and on, and the bottom half of the screen would randomly go blank once in a while. But it always seemed to come back and work just fine after a few minutes.

The riding position is comfortable for a short rider; I’m only 5 feet 8 inches tall but, if anything, I felt too big for the poor thing. The seat is narrow and firm, so after an hour in the saddle it started to get uncomfortable. But for quick blasts to the store it feels fine. There’s no wind protection, so you have nothing between you and the elements; if (or I should say when, if, like me, you live in the Pacific Northwest) you get caught in the rain, there’s nowhere to hide.

There’s nowhere to hide from cars approaching from the rear either. While the little engine putts along fine in town, out on country roads it can be a little slow. It will not get out of its own way when you are buzzing along at 40-50 mph. You just have to twist the throttle and hope for the best as it slowly builds speed.

Hills are not its friend either. The anemic acceleration is not intended to climb steep grades – as I found out more than a few times. There’s not much more exciting than being tailgated by a dump truck with a pissed-off driver as your bike strains to go 40 mph on a curvy uphill backroad with no room to pull off. That sucked, but I shouldn’t really have been there in the first place.

In all other situations, the little four-speed transmission is pretty nice. It allows you to blast off the line when scooting from intersection to intersection in town. You can keep up with the Joneses here, but they’ll get their revenge in a quarter mile or less. I like that the K-Pipe has the auto-clutch, because it makes it a good choice for a new rider looking to gain experience. The way it works is that the engine won’t stall, but you still need to use the clutch when you’re shifting through the gears. It was easy enough to get going that I even let my teenage daughter ride it around the neighborhood for her first time on a “street bike.”

But there’s one flaw in the otherwise beginner friendly layout:

Neutral is located at the end of the shift pattern. All the way down is neutral, you shift up into the four gears from there. The problem comes when you unwittingly shift into neutral as you slow, dropping into the lower gears. You might miss the miniscule green indicator light and find yourself going nowhere when you attempt to accelerate. It’s embarrassing. Otherwise, the transmission works well overall, even though it has a long throw at the lever.

Keen readers might note that Kymco had a recall on this bike when it first came out because the gear pattern was reversed. That has been handled on the 2017 models, but it’s still sort of funky.

The brakes are decent, too. The K-Pipe uses a 276mm front disc with a single twin-piston caliper while a low-maintenance drum brake set-up slows the rear. It runs on 3.50-17 rear tire with a 2.75-17 front. They’re pretty thin but the bike feels stable on the road; it rolls over potholes and rough street surfaces better than the 14-inch wheels of a scooter by comparison. The cast wheels look cool and really work with the overall sporty appearance of the K-Pipe.

Riding it at night proved that the single headlamp actually projects a wide, decent beam. The high beam is quite a bit more narrow and only goes a little way farther ahead. The dash is dim. I like it because it doesn’t blast you with any glare. The blinkers are integrated into the bodywork and the brake light is actually quite bright, day or night.

One of the selling points of this bike is the incredible fuel economy. I was riding this thing full throttle everywhere, to get it moving my 180-lbs ass around town. It still managed (just a hair) more than 60 mpg. Some other riders have managed more than 80 mpg on their K-Pipes. That’s pretty awesome. Fuel capacity is 1.2 US gallons, so using those two figures you get a range of 70-100 miles.

READ MORE: Is Your Commute Really the Worst? | RideApart

That's a lot of trips to the grocery store – even those that are on the other side of town. Meanwhile, most people have a daily commute of less than 20 miles, so the K-Pipe should be good for a week worth of riding for about $5. Besides being eco-friendly the K-Pipe offers a pretty decent ride for a mini moto.

Just Gotta Scoot: "Acceleration was adequate, maybe not quite as good as a comparable 125cc CVT scooter, but keeping up with city traffic was never a concern. Handling was good, better than a stock Honda Grom and the capabilities of the chassis exceed the engine capabilities."

Phil West – MCN: "Where Kymco have been clever... the K-Pipe’s been designed to stand out visually – and it clearly does just that. This bike isn’t mock or pseudo anything; is no ‘mini sports’ or junior trail instead having an original urban style all its own.

Evans Brasfield – Motorcycle.com: "Another quality-control issue that cropped up on our K-Pipe test unit was a glitchy instrument cluster. On occasion, the lower half of the LCD display would only display intermittently. At other times, it would work just fine."

Overall the thing I liked most about the K-Pipe is the fuel economy and the way it looks. It's a good looking little motorcycle that tips the scales at about 229 lbs (claimed dry weight). That helps it remain manageable for newer or smaller riders who are looking for a bike that’s different than a scooter at a similar price point. There is no doubt that the K-Pipe is fun to ride if you’re not in a hurry.

I did not enjoy going that slow. While it is probably fine for folks riding around town or whatnot, it just doesn’t work for me. The bike would also stall at a stop every once in a while and I couldn’t figure out how to turn the idle up to try to counter it. I imagine the bike is jetted for sea-level while I was riding it around at 2,000-2,500 feet most of the time. I think it would do fine once sorted, though, because it runs fine on the open road.

If I had to buy a scooter for some reason, I guess this would be a great alternative. It has the automatic clutch, which is great for starting. You still get the interaction of shifting in the equation and it does handle pretty well. Plus, it’s a cheap way into riding. It had a few issues like the dash problems, but that’s where the two-year warranty will come in handy. Bus I say, this sort of bike just isn't my cup of tea. I've been riding for a few decades now and my expectations for what a bike should do are obviously further along than the expectations of the sort of people for whom the K-Pipe was designed.

Kymco has made a nice little motorcycle with the K-Pipe. I’m sure Kymco will sell thousands of these around the globe and if you’re one of the people that end up doing so you should be pretty pleased with the purchase. It is not very expensive, it is easy to ride, and it has a 31-inch seat height, so it fits a wide range of riders. It's fun to ride around town and did well (albeit slowly) on back roads.