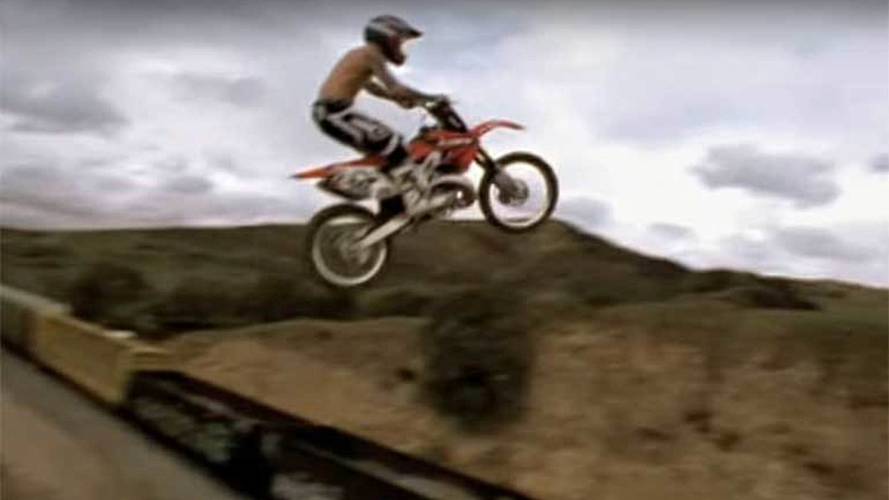 Kyle Katsandris made a name for himself with a highway jump earlier this year but his failed jump of a train has put him in the hospital.

The Los Angeles Times reports that Kyle Katsandris, 24, who jumped a motocross bike across a freeway last month was injured Sunday while trying to leap a set of railroad tracks. The rider overshot the landing and was taken to a hospital in critical but stable condition.

Last month, Katsandris posted video of his Riverside freeway jump on his Instagram account, which has attracted 180,000 viewers, among them the California Highway Patrol and Riverside County Sheriff’s Department who were not amused. CHP Sgt.Randy Costelow said that in the future, “If anyone is caught doing it, they will be prosecuted.”

Caltrans subsequently blocked access to the dirt ramp Katsandris had used to jump the freeway.

For the more recent incident, officials reported Katsandris had been trespassing on railroad easements and also violated the Simi Valley municipal code for off-road driving.

“Sometimes these violators try to jump over a moving train, which is extremely dangerous,” Arabian said. “We don't know if that was their intent on this occasion. Obviously, a train versus a motorcyclist would result in serious injury or death to the rider.”

Authorities have yet to decide if charges will be filed on the railroad incident. Katsandris had reportedly sought advice from Colin "Scummy" Morrison, who had done the stunt years earlier.

The YouTube video above shows Morrison leaping over a moving a train and landing safely. It appears the jump covers 160 to 180 feet. In a television interview, Morrison said: “Pretty much, if anything goes wrong, the consequences are really big.”

Morrison said he respected Katsandris for trying the jump, and wished him a quick recovery. The Times quoted Kenny Dawkins, a friend of Katsandris, who said the media has made the motocross rider appear as though he was “some kind of irresponsible outlaw who is risking the lives of others while attempting his jumps."

"Truth is, the only person who's life is at risk is Kats himself," Dawkins sid.