With New Monster 797 Ducati Errs on the Side of Cool 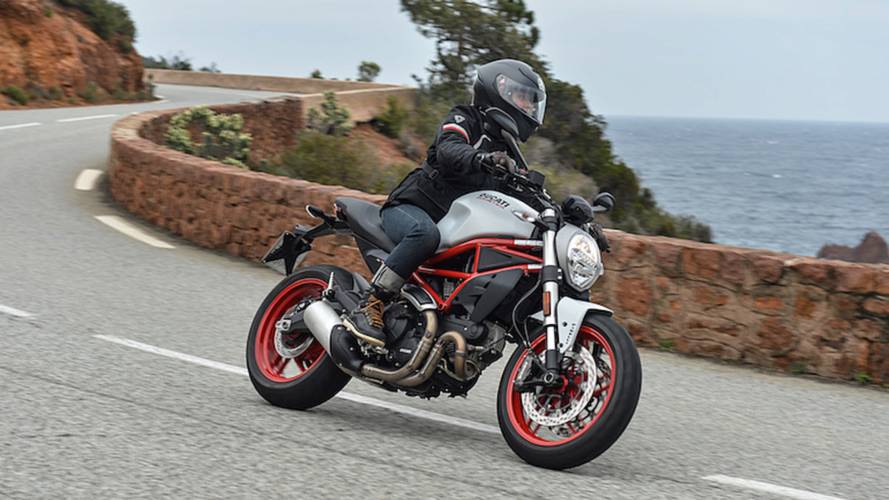 Cool, fun, sexy, and powerful. Kyra Sacdalan reviews the new Ducati Monster 797 and finds it has a number of feminine qualities.

My previous test-ride of a Ducati Monster was an eye-opener. The 1200 S was the first “mean” motorcycle I had grasped by the handlebars. It was controlled and calculated and smooth when I needed it to be, then wild and unpredictable and aggressive when I... well, mostly my colleagues... wanted it to be. The test ride with my first Duc started as a wild goose chase and ended as an Italian guided tour of the French Riviera. And in the end, enthusiasm for the vessel was quite evident in my post report.

To test the Ducati family’s newborn “Monsterino” – an endearing term the company uses for smaller displacement iterations – I traveled, again, to the south of France, this time to the sleepy tourist town of Théoule-sur-Mer. The air-cooled, yet still Euro 4-compliant Monster 797 harkens back to its M600 heritage with a sophisticated style and simple application. This second escapade aboard an “M” classified bike, which is otherwise aimed at n00b riders (yeah, right…), was unsurprisingly enjoyable, albeit a bit different.

The weatherman predicted rain. Lots of it. So, Beppe, Ducati’s resident Pied Piper, decided to lead our band of doe-eyed disciples along the coastline to capture necessary images of us in action while the sun was still out. This gave the group an unorthodox extra day aboard the motorbikes. It was glorious.

For me, coming from the biggest bike of the bunch, man-handling the Monster 797 was, for lack of a better word, possible. My absence of leverage was no factor in lifting, pushing, balancing or cornering. It was too compact to combat any request. It inspires confidence when there’s room in that department to grow, which helped mentally prepare us to handle the next day’s inclement weather and densely populated passageways. Roads weren’t yet wet, but hell was it windy! You could feel the pending storm crawling down the mountains, reaching its cold, cloudy fingers toward the Mediterranean seaboard. Volatile gusts of wind would catch the barebones bike at tires’ edge, nudging it, and its captain, toward oncoming traffic – the only time those few extra pounds on the 1200 were missed. The overall experience, though, was a great introduction to an “intro” bike.

It should be mentioned: I refer to this entire lineup of Ducatis in the feminine form. Why? Because what else is as devilishly alluring as a clever, classic, confident, well-bred woman? OK, men, too, can be “all of the above” and more, but the Monster lineage oozes sex-appeal. And, she looks best Naked. The curves on the ‘17 models are soft in all the right places with a slender waist and prominent chest. Their muscle structure is tone but not bulky. An exposed full-length Tubular Trellis frame keeps the 797’s figure solid from head to tailbone, while the 1200 sheds unnecessary weight from her rump to make up for her heavier rib cage. The two share a tank that’s scandalously easy to unlatch with their infamous ski-boot buckle closure at the nape of their neck. Even the LED headlights, also identical, have a come-hither stare. All that, adding to an already phenomenal, zippy, and responsive personality, make the contemporary Monster series more relatable to womankind than some of its more brutish, showboating competitors. They don’t have to prove themselves. There's is no proverbial dick here to wag. They know their worth. And maybe we should, too?

Ducati’s newest Il Monsterino isn’t “mini” at all. The Italian company mapped the engine torque to provide smooth, even power delivery from bottom to top. Sure, 75 hp may not read "Superbike" on paper, but as a wise man often tells me: “There’s no replacement for displacement!”

So, having merely 425 wet lbs to contend with, the bike could slide out from beneath you before you knew it was in motion. You want wheelies? It’ll give you wheelies. Drag knees? The standard Pirelli Diablo Rosso II tires, tight riding position, and silky throttle-response will ensure you scrape up your leathers before you’ve even worked up the courage. But why are we talking about the execution and aesthetic? Ducati hasn’t skimped in the department they’re really famous for.

We’ve known since 1946, when Ducati's first engine was assembled in its intimate Bologna factory that Ducati is synonymous with performance and beauty. Until the Scrambler was reborn a few years ago, Generation Y saw Duc ownership as more of an accomplishment at the top of a ladder, while other bikes were the rungs that brought them there. And let’s be honest, the entry-level Monsters were viewed as imposters of the real thing: a bike that could be passed along to your girlfriends.

The Monster family’s first roundup of 600s, 700s and 800s would – for many – prove that point. But today, the 797 puts that idea to bed without foregoing its intended approachability. Borrowing inspiration from the athletic 1200 S figure and no-fuss M600 philosophy, this “beginner” bike is polished. Refined. And strong.

It has the look and the skill – even without all the electronic bells and whistles. You’re allowed to be hard on it, to test your limits and make little mistakes with a lesser chance of bigger consequences. But be smart, because 803cc isn’t a number to take for granted. But perhaps the 797's $9,295 MSRP is; that's $7,700 less than the $16,995 starting price for the larger 1200S (which performs similarly to the 797 when in Urban mode).

The 797 comes in three crisp colorways: Star White Silk with red frame and wheels, the classic Ducati Red with black frame and wheels, and Dark Stealth with black frame and wheels. The Standard version offers LEDs, ABS, USB and it can be upgraded to offer the Ducati Multimedia System, which connects with your smartphone. Upgrade the lady to Plus and she’ll be equipped with passenger seat cover and windshield (unenthused “yay”), which is nothing short of boring, but not a deterrent. Personally, I say don’t go Plus unless you need both those two things.

“ is more Monster than any other Monster.” – Stefano Tarabusi, Product Manager for Ducati's Monster line.

The L-Twin engine purrs in idle and roars on the road. It might not bark as loud as a more ferocious motorcycle, but the bite still hurts all the same. And she goes fast, real fast. The rear tire glues to the ground when you want to goose the front wheel up. And when it's time to stop, the Brembo brakes and Bosch 9.1 MP ABS system with internal pressure sensor brings the bike to screeching halt – minus the screech. Meanwhile, what made the slow bits better for me was the agreeable seat height. Stock at 31.69 inches, a shorter disposition like mine will be quite at ease commanding this featherweight motorbike while a tall frame shouldn’t feel clownish for scrunching into a compact riding position. Though, there’s an aftermarket option for those who are concerned. A rider of average stature will find the Monster 797’s height, weight, shape and appeal – like Baby Bear’s porridge – just right.

The point I'm so near to reaching is that Ducati's Monster 797 has been measured, weighed and, although maybe she won't be crowned queen of the less-aggressive street bikes, she's definitely in the Top 10. I say 10, rather than five, to leave room for subjectivity. I'm short and I don't "slay" twists and turns, nor do I need a daily commuter that challenges me. Hell, at this point I'm the sort of granny who competed in a three-hour endurance race on a 50cc Honda Cub fully-locked in an upright position as finer racers dragged their knees past me, pinned to win.

I enjoy going fast, sure. And relish in overcoming obstacles. But I'm also not intent on going beyond the pace – metaphorically and physically – I have chosen, high-speed or slow-speed. So, a lower horsepower'd beast is more than welcome in my riding repertoire.

Can I afford it right now? No. I'm not ready for two bike payments! But there are plenty of go-getters out there who have a similar riding style – if not stature – who make even a few extra dollars more than me (or at least have fewer re-occurring payments) and who would find the middle-sister Monster an affordable delight. This goes for lesser-skilled and far-superior-skilled riders, as well.

If an approachable, affordable and aesthetically pleasing Ducati is the goal, this “entry-level” model is your Huckleberry. It lets you be the master of your ride, allowing you to take it easy or to the limit. And it lets you actually be that person you’ve wanted people to see aboard your bike: confident, cool, and maybe a little reckless. As a “Ducatista” or “Monsteristi.” Part of a big Italian family.