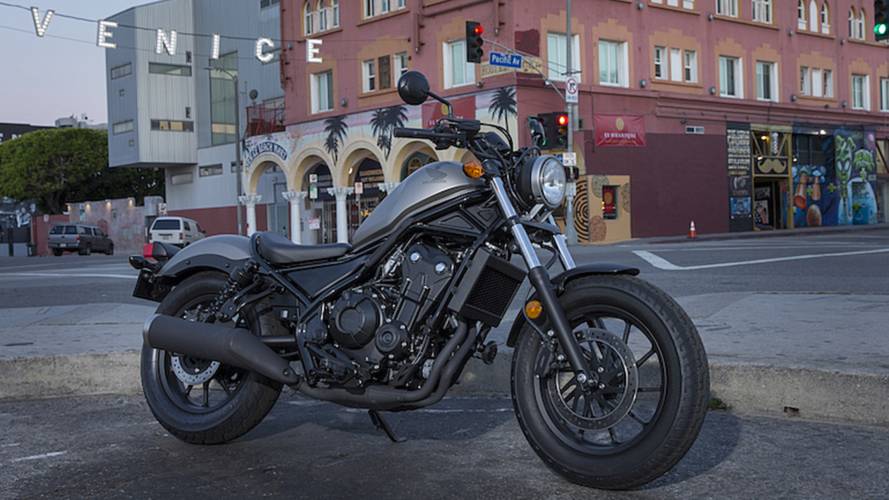 Our little Rebel is all grown up.

The Age of Technology is upon us, and the spawn of this generation is starting to evolve accordingly. Autonomous cars are a thing, and certainly Honda has its sights set on the future. An influx of A.I.-commanded vessels is coming to fruition. More and more, adolescents and young adults are claiming little to no interest in piloting their own vehicles, car or otherwise. They’d give up literal and proverbial control in favor of lounging, updating their Instabookchat, and letting the world pass them by in a blur.

OK, for the sake of argument, safety is a factor in all this, and motorcycles aren’t exactly a product of safety. OEMs do their best, but without the invention of an invisible forcefield (fingers crossed), a persistent element of riding is risk. So, what can an industry forged almost entirely on one’s independence do about a growing demographic that’s content with unceremoniously revoking theirs? Maybe the key is to give in? Fold your cards; wait for the next hand to be dealt. Or, do what I suspect Honda has done. Keep an eye on the cool kids, then attack the Achilles heel and chant known Millennial weaknesses over and over like a mantra while (re)building an old bike from the beginning.

In delivering the new Rebel 300 and Rebel 500, Big Red has tried to take a product that’s synonymous with “beginner” – one that could be the epitome of youth, yet still harkens to Honda’s heritage – and make it badass. From the look and feel of the new Rebels, the engineer and design teams tacked up motivational posters of kittens portraying positive and inspirational images appropriately labeled something like… “Nostalgic,” “Artisanal,” “Customizable,” “Approachable,” “Rebellious.” The perfect arsenal of adjectives to invade the hearts of Generation Y.

Though my own experience with the infamous entry-level motorbike had been limited until now, it was actually the first bike I’d ever ridden. I earned my motorcycle endorsement astride a previous-generation model. At the time, the Rebel seemed massive. My lack of comparisons and excitable imagination grew the 250cc machine to one 10 times its size, with power to match; I was intimidated. Luckily, I passed my class with flying colors, and Honda became my go-to OEM for a few years (my next “beast” was a CM200, rawr). Mine is a story many moto enthusiasts share. Since 1985, most new riders have likely learned aboard Honda’s good girl bike with the bad girl name. The CMX series has always been considered a launching pad, and it’s never been more than a means to an end. It’s a motorbike most known as the portal to Freedom as America knows it best. Aside from necessity, however (there's no arguing its low price-point, durability, simplicity and accessibility), the previous Rebel, frankly, wasn’t renowned for performance, aesthetic, or comfort.

Honda has been quite blatant about its intentions for the new line. It wants the Rebel to reach the older teens and young adults – those making up the next wave of riders – because they’re the next set of humans to rule the world. And they’re the toughest to crack. They’re picky and fickle and contradicting. I know because I’m part of this group. We claim to want comfort, or style, or performance, or heritage, or reputation, yadda, yadda. We think we want it all, then the next thing comes around and we want that instead. Screw the well-rounded product that took years of R and D! That was cool last year, but this year I want to be a hooligan who races flat track or pops 12 o’clock wheelies on a Dyna or travels the world on an Africa Twin.

But we’ll always need something to get us started. And it would be nice if that something could also serve as a bike to cruise 'round town on when we’re seasoned riders. A bike that does the simple stuff first and fulfills all the other demands second, third, and fourth.

What we really need are choices: variety within a few quality products that are different enough, but relatively interchangeable. A good base to work with – if customizing is in the cards – a handsome look that catches the eye but isn’t so fashionable we’ll lose interest at that upcoming indie motorcycle show. We want a bike that can be ageless, or, if not, show its age well through patina. The manufacturer should offer some accessories to seal the deal on aesthetics and satisfy our need to keep buying more stuff. It should be a bike that has enough of everything: low- and high-end torque, even power delivery, good stopping ability, maneuverability and (a decent amount of) comfort. Oh, and above all – to actually gain attention from all variety of rider – it must be approachable. Because fear can conjure up plenty of excuses as to why we don’t need or want something.

So, yeah, pretty simple right? All the things for not all the money. And I believe the Rebel 500 is the sure thing we never knew we wanted, and more. The 300, however... I’m not quite convinced.

With the Rebel’s two displacement sizes, we have options. Within each option, we have even more options: pull off the fender; change the pipes; stiffen the suspension; paint the tank to match your aura; whatever comes to mind. And even better, that whole process has been made easy courtesy of the Rebel’s design team, who believed that everyone should have the ability to make the 300 and 500 their own with little effort. For example, they shortened the stock sub-frame so the rear stays clean and uncluttered if an owner removes the rear fender. Their keen eye on style and configuration ensured the Rebels could be a few wrenches and a good paint job away from truly being yours. Equally, you could add the accessories and touring accouterments that’ll help squeeze out even more miles of use.

Both blessed with a 27.2-inch seat height, you might guess that these short-stacks have a Napoleon Complex. The Rebels stand up for themselves, and they can be (a little bit) mean if they need to be. You want them to climb a steep, twisty mountain? Done. The 300 might lag a bit, but give it the chance, and it’ll make it without being run over by some inattentive commuter. The 500, meanwhile, blasts through most obstacles without so much as a bead of sweat. Though the horsepower wasn’t divulged to our group, neither bike felt lacking in straightaways, around bends, or when passing semi-trucks at a cool 75 mph average. They did so with barely the buzz on the bigger bike's parallel twin, and as much smoothness as you could expect from the 300's single-cylinder thumper. Though, both bikes could afford a lot better suspension. For someone of my stature – 5 feet 1 inch tall and 125 lbs – it wasn’t a huge issue, but when the ride became rough my butt was reading the road like Braille.

Neither Rebel is the fastest among its peers. Or the strongest or even the loudest. But hell, do they have heart! Sitting low, I felt some tension while wading through rush hour but it wasn't long before my faith in the nimble and swift little mid-control cruisers bolstered my courage, blasting me between cars and trucks and SUVs.

Unlike the more sizeable cruisers I’m accustomed to, the bikes don’t have a booming voice. But as they say, it’s always the quiet ones you need to watch out for. Like Indiana Jones slipping past a sure crushing death, we – the Rebel and I – narrowly escaped bottlenecks, swerving station wagons (Are there still station wagons on the road? –Ed.), and the rippling crevices of the lane between the lanes. Whichever challenge we encountered that day, both bikes took in stride and looked damn good in the process. Highway, byway, or side street, they turned heads.

Both ’17 Rebels possess an upright seating position and standard controls. They also both come branded with the iconic Honda wings. But beyond that, not many traits are shared between the modern machines and their ancestors. In this year’s models, fit and finish are as important as function. The motorbikes share mind, body, and soul. Both are fuel-injected, liquid-cooled, 6-speed and chain-driven. They sport dual-shocks on the rear, cast wheels and fatter front tires than the former iteration. Not to mention, the metal bits are fully “murdered out” to allow the perfect canvas for a creative gearhead to base his or her art upon, while maintaining a sleek and attractive appearance until they’re ready to do so.

Guts are what make up the real differences between the two new models. A disparity begins first and foremost at the engine. The 500 roars to life with a parallel twin, while the 300 hosts a single beating heart in its cage. The 500's extra cylinder helps beef its fighting weight up to 408 lbs (wet). The 300 keeps svelte with a respectable 364 lbs. Both feature angular tanks that carry 2.96 gallons of fuel and come in all of my favorite colors, though only the 300 comes in the Matte Pearl White - a color I love - and the 500 in Bright Yellow - a color also on the top of my list.

In my opinion, the 300 is a six-month bike, but the 500 has the prospects to be a long-term love. Once you’ve modified the bike to your taste, it can grow with you. The 500, of course, shares the same powerplant (albeit with different tune) as the CBR500R, CB500F and CB500X – bikes that the RideApart team have been in love with for years now. So, it's no surprise the 500 could soar beyond the short ceiling of a beginner bike and remain in your herd for a long time.

I can't help but wonder why anyone would pay the $4,399 sticker price for the 300, considering it's a bike that might not hold your attention for long. Why not just buy its predecessor (the old Rebel 250) for pennies, then move on to the new Rebel 500 at $5,999? If Honda hadn’t created the 300, I wouldn’t be wanting. It’s not a bad bike; if it had potential to be more than a stepping stone, then the real-world value would be closer to matching its price-point.

Ultimately, though, both of Honda’s new Rebels are responsive, smooth, unsuspectingly assertive, moldable as putty, as manageable as any lightweight bike you’ll ever handle, and a damn good time! With the 500 in particular, the Rebel is no longer just a beginner bike but a promising choice for a variety of interests; it's as much for an entry-level rider as an expert – the casual ride with an edge. Ride around town. Cruise through the canyons. Grab a board and head to the beach. Or just survive the horrific California congestion.