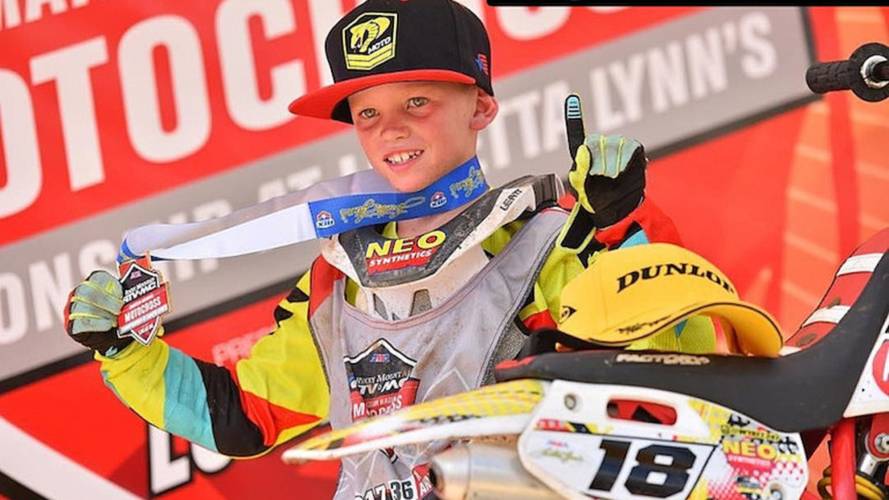 Wyatt Thurman is a National Amateur Motocross Champion at age seven, and has more titles in mind.

Wyatt Thurman of Temecula, California, has been racing more than half his life, and he’s only seven. His father Eric told the Press-Enterprise that on Wyatt’s first ride at age three, the throttle stuck open and he had to be snatched off the bike at Lake Lucerne.

“He took off across the lake bed,” his dad said. “We had to pull him off the bike by his chest protector and the bike was still going.”

Now older and wiser at seven, Wyatt has one national motocross title under his belt and he’s looking for more. Last month, when he was still six, he won the 51cc Limited Class on a Cobra at the 36th annual Rocky Mountain ATV/MC AMA Amateur National Motocross Championship. The prestigious annual event at Loretta Lynn’s Ranch in Hurricane Mills, Tennessee, always draws the fastest young riders in the country. Haiden Deegan, also from Temecula, took top honors in the 65cc (7-11) class aboard a KTM.

“The Amateur National at Loretta Lynn’s is the event every motocross racer in the country wants to compete in,” MX Sports Director Tim Cotter told the Press-Enterprise. “A win at Loretta’s gives a racer instant national notoriety and can serve as a springboard to a lucrative professional motocross career.”

Young Wyatt is competitive by nature, but he also just loves to ride. Why motocross? “Because you get to go in the dirt,” he said. “I get to exercise and move my body.”

His mother, Tarayn, said that Wyatt has always had a different fear level than other kids. His number plate is 247, reflecting his enthusiasm for riding 24-7.

“He’s always loved it,” she said. “We’ll support him as long as he loves to do it.

”It doesn’t matter if it’s sitting at the dinner table, he wants to be the first person there,” Wyat's dad Eric Thurman said. “You can’t teach a person to be a competitor. You just have to have it in you.”

READ MORE: Video of the Day: Motocross vs. Soccer

Wyatt rides daily, training four days a week on the motocross bike and practicing donuts the other three days on his off-road bike. Eric noticed that in Tennessee, Wyatt had hung with the leader in each of three races and passed him on the last lap. He asked why his son had cut it so close.

“You always say it is easier to be the hunter than the hunted,” Wyatt said, “so I just waited.’”