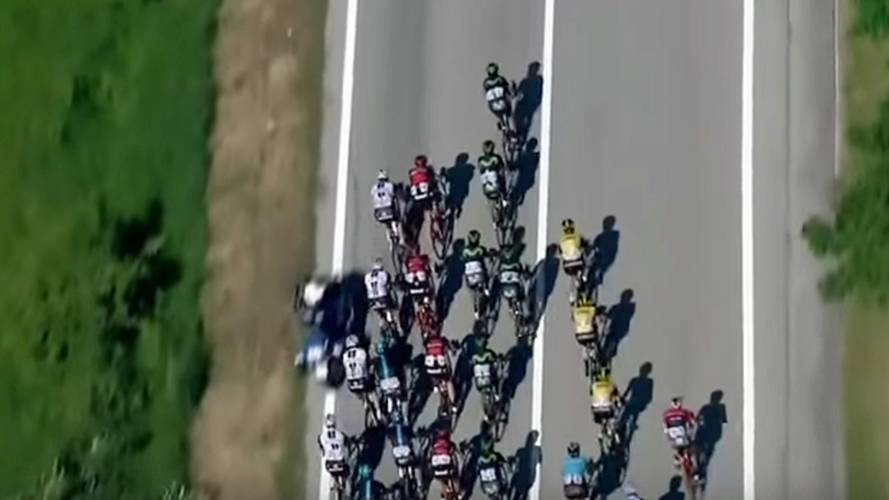 The Italian Giro Bicycle race was marred by an accident that was caused by racers hitting a parked police motorcycle.

A police motorcycle parked on the edge of the road was clipped by a bicycle racer in stage nine of the Giro d’Italia on Sunday, causing a chain reaction crash. With only eight miles to the finish, the policeman decided for some reason to stop on the road. Bicycle racer Wilco Kelderman clipped the motorcycle and went down, suffering a broken finger and setting off a small chain event crash that collected a number of competitors.

The peloton was racing at speed approaching the finishing climb, with riders jockeying for position and preparing to attack for the lead. While no bicyclists were seriously injured in the melee, one was unable to finish the event and three top riders lost valuable minutes.

The motorbike "was stopped just after a right bend, we couldn't see it till the last moment and could only shout," Sunweb rider Chad Haga wrote on Twitter. Giro race director Mauro Vegni said the driver of the motorcycle had made a "mistake in judgment," but he added that he hoped the incident would not ruin the work that the Italian state police has been doing for years. Motorcycles normally park off the side of the road, not on it, so the riders would not have expected to find one on the racecourse.

Why the motorcyclist had parked on the racecourse remains unclear. TV commentator Daniel Lloyd was among many who expressed frustration over the incident, pointing out the "stupidity" of it.

"The influence motor vehicles have on pro bike racing is ridiculous. I don't know what the answer is but it needs sorting," Lloyd also wrote on Twitter.