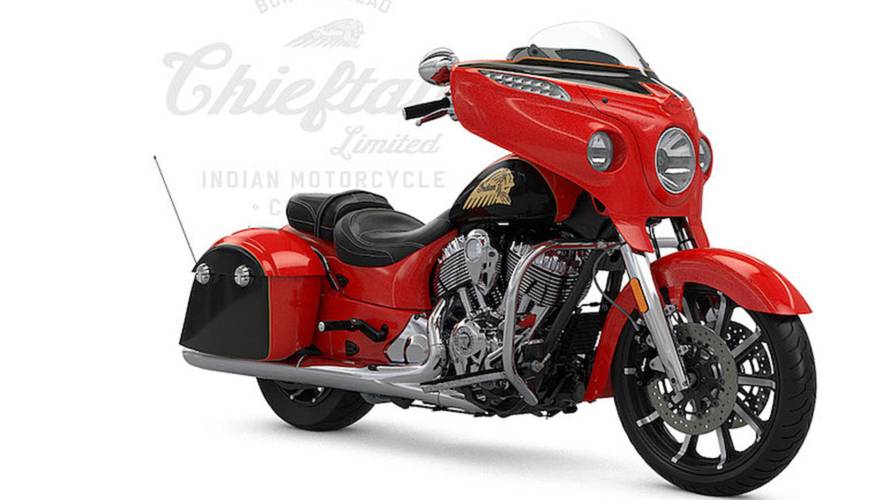 Indian's Chieftain Limited has been so popular in its first month of availability that the brand is expanding the number of available paint schemes.

That nugget of information was buried in a media release issued Monday which focused primarily on the fact the Chieftain Limited’s paint options have expanded to include five different colorways.

When first unveiled the Chieftain Limited was available only in Thunder Black.

The Chieftain Limited was unveiled early last month to mixed applause. I’m personally a big fan of the bad-assified bagger, which differs from a standard Chieftain primarily at the front, where the iconic valanced fender has been cut away to reveal the bike’s muscular brake set up, and a 19-inch wheel has been added in place of the standard bike’s 16-incher. But some folks felt the model – which, in most ways, is the same Chieftain that was launched at Sturgis four years ago – wasn’t the best way for Indian to assert itself in the face of Harley-Davidson’s Street Rod.

“With Chieftain Limited, our aim was to deliver a more modern version of the Chieftain with a bit more attitude than its predecessors, and the response from the market has shown that the new design has resonated extremely well with our customers and dealers,” said Reid Wilson, director of marketing for Indian Motorcycle. “Considering the significant demand we’ve experienced, the expanded new colorways couldn’t be coming at a better time.”

The Chieftain Limited in White Smoke. Good luck keeping that one clean!

Indian, of course, doesn’t share specific unit sales numbers but we’d be willing to guess that in its home market of the United States, baggers are its most popular models. Certainly that’s the case for Harley-Davidson, who sell Street Glides in almost exponential numbers over other models, and it was the case for Indian’s recently put-out-to-pasture sibling, Victory, which struggled to ever really sell anything other than variations on its Cross Country theme. One wonders, then if it will only be a matter of time before the Chieftain Limited takes the top spot on Indian’s sales charts.

Indian has been pretty vocal about its plans to extend beyond the traditional cruiser/tourer market in the not too distant future – after all, baggers do not perform well outside of North America and the North American market is currently in a slump – but we have to believe the brand is happy with the Chieftain Limited’s early success. Hence the addition of new paint schemes.

The Chieftain Limited in Star Silver over Thunder Black

From the middle of June (in the United States and Canada) the Chieftain Limited will be available in:

The Chieftain Limited in Silver Smoke. We're struggling to see how "Silver Smoke" is different than the "Star Silver" pictured above – both of which we feel look a little too "Primer Grey" for the price tag.