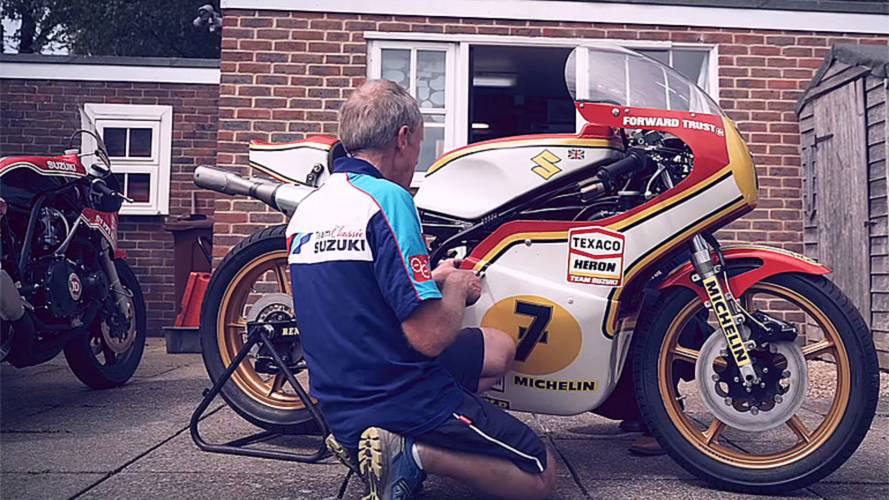 In Part 2 we get a get some good views of what was state-of-the-art Grand Prix racing technology of 40 years past. For the current generation of racers, some of this will look downright antique. Carburetors! It’s also noteworthy in the first start-up of the machine just how quiet it is, barely louder than modified street machines back in the day.

Suzuki team veterans Martyn Ogborne, Sheene’s mechanic in his championship years, and Nigel Everett provide details on the restoration. They note that the machine was in quite good shape for its age and presented them with few problems aside from a bit of water damage to the magnesium crank cases and the usual damage time does to a sitting bike. The renovation was begun last year as part of the 40th anniversary celebrations of Sheene’s maiden world title. Following its restoration, which was made possible by Suzuki’s Vintage Parts Program and the Sheene family – to whom the machine still belongs – the bike is set to appear at a number of events this year. Those events include the Sheene Festival at Oliver’s Mount, the Donington Park Classic Motorcycle Show, and the British Grand Prix in August.

Papa himself was pleased to learn that Suzuki continues to offer a supply of parts for older motorcycles, including the early GS1000 four-cylinder models. As the owner of a slightly modified 1980 GS he takes some comfort in the knowledge that parts chasing won’t necessarily be limited to scouring eBay and swap meets. For more information on Suzuki’s Vintage Parts Program, check out the website here.

Also, a tip of the Wealey cap to Mssrs. Ogborne and Everett. Bloody good show, lads.