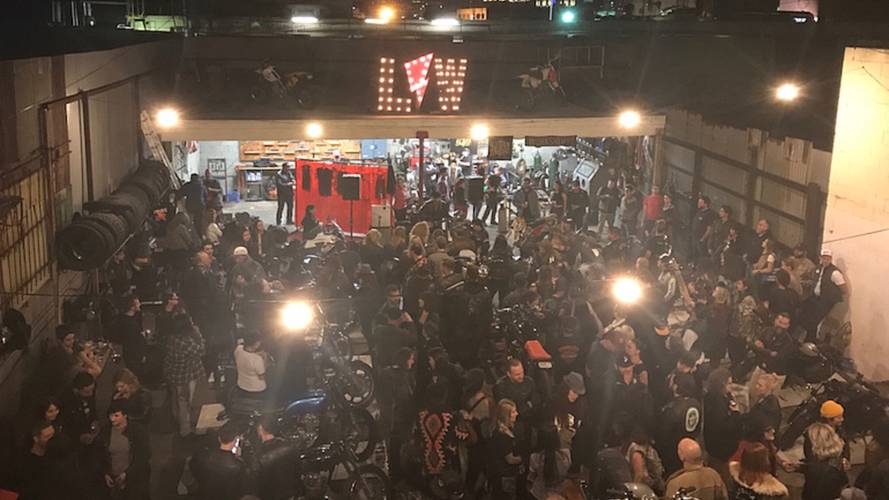 Alicia Elfving knocked it out of the park once again for the third-annual Women's Motorcycle Show in L.A.

Like last year, the show had an impressive turnout, with the crowd consisting of an interesting mix of hipsters, MC members, moto-journalists, and just about every genre of biker imaginable. Motorcycles are a powerful common ground. The range of bikes parked outside the show was as diverse as the attendees, with legions of cruisers, sportbikes, nakeds, classics, customs, sidecar rigs, and dual-sports lining the sidewalks and median for more than a block in either direction of the event.

A Tex-Mex BBQ food truck was stationed outside for the duration of the night, and, as per usual, Lucky Wheels' hip coffee bar was open. For folks trying to go in the other direction however, liquor, beer, and wine was being served. Though this year’s proceeds didn’t go to St. Judes like they did last year, that didn’t stop me from drinking like they were. (UPDATE: Alicia tells me booze proceeds didn't go to St. Jude's last year, either – other monies did.)

Just some of the raffle prizes.

The event occupied both floors of the Lucky Wheels facility, with the bikes being exhibited on the ground floor while the upstairs area played host to a motorcycle art display, an arm wrestling table, and an incredible raffle consisting of prizes that a number of moto companies had donated. After a successful Kickstarter campaign, CEO and founder of Roame Shoes, Adam Timmerberg, was on site to show off his company’s products, answer questions, and donate of pair of his stylish and hi-tech kicks to the raffle. I won some cool Alpinestars gear and my friend scored a pair of Roame Zero riding shoes. Other festivities included several live music acts, live metal working, and a motorcycle piñata.

Some of the hand-drawn art on display.

The arm wrestling table turned out to be a big hit.

The meat and potatoes of the event were the bikes on display. The exhibition included a handful of gorgeous American V-twins, several well-optioned cafe racers, an electric Alta supermoto with bespoke plastics, a handful of frankenbikes, and several returning machines from last year’s show. My favorite bike on display was a 1938 Indian-powered, Royal Enfield-framed machine previously built, owned, and ridden by Cecilia Adams shortly after World War II. Adams garnered a good deal of attention from the media as a pioneering female rider. A closer runner up was a thoroughly customized 2012 Triumph Street Triple, complete with bespoke headlight, paint, exhaust, and quite a bit more.

Cecilia Adams in a 1949 issue of Life Magazine.

A Street Triple with a good looking headlight.

While this looks like your average cafe racer, this custom CB is outfitted with a ton of trick parts such as a MotoGadget display, bar-end signals, LED tail-strip, and bespoke buttons.

A Triumph with a houndstooth pattern seat. So cool.

Jessi Combs and Theresa Contreras’ “Real Deal” BMW R nineT has been at almost every show I've attended in the last year, yet I'm still not sick of seeing it.

The night was going well, but then – just before the raffle winners were announced – a police helicopter appeared above the venue, shining its spotlight onto a confused crowd. Police had already been on scene telling people to move their bikes off the sidewalk and from the road’s median, which many people had used as a space to park their machines. Despite the event being held in an industrial district on a Saturday night and not a single attendee acting rowdy or aggressive, the boys in blue shut down the shindig. In their defense, we later found out the event lacked proper permits, but it was still a disappointing ending to an otherwise great night.

The police helicopter looking down on the street.

Even with the unfortunate and premature ending to the night, I’d definitely call the third annual Women’s Motorcycle Show a success. The turnout was solid, the sponsors were great, and the collection of bikes on display was even more impressive than last year’s show. Alicia says she plans on doing it again in 2019, so, if you live in or will be in the Southern California area next year, I highly encourage you to attend.

The woman behind the Women's Motorcycle Show: Alicia "the MotoLady" Elfving.