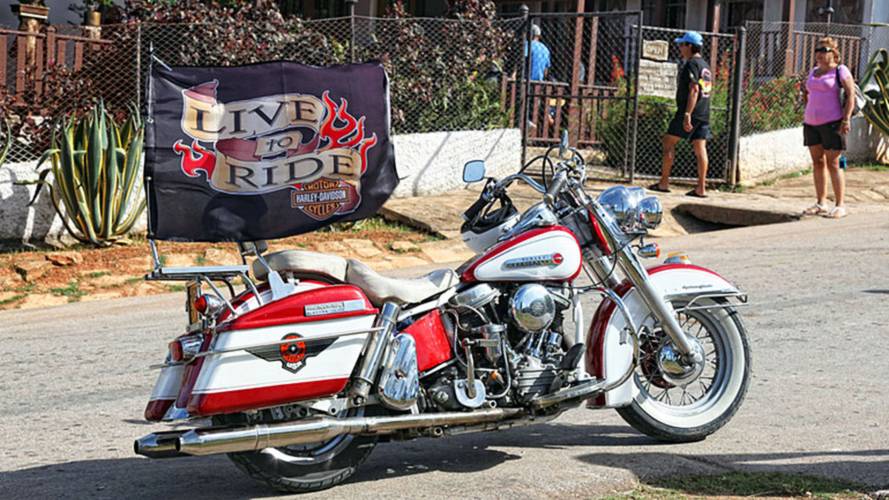 Cuba's Harlistas Cubanos MC held their seventh-annual rally this year, an event that brought more than 80 bikes together from across the country and abroad.

Like their four-wheeled cousins, Cuba's fleet of ancient Harleys is kept running with bubblegum, baling wire, and sheer passion

Harley-Davidson is not a name typically associated with Cuba. The Americanest motorcycle brand in all the land isn't particularly well represented in the tiny island nation, but you can still find some choice bikes there. See, much like Cuba's famous car scene, the country's motorcycle scene is a time capsule—stuck forever in the early-50s. The 60 and 70-year-old bikes are still going strong though—despite a severe lack of parts, accessories, and officially licensed Harley-Davidson bandanas—and nowhere was that more evident than this year's annual gathering of the Harlistas Cubanos MC.

GUANTANAMERA: Che it Isn't So: Guevera's Son Gives In to Capitalism

On the weekend of February 10, more than 80 riders on antique Harleys descended on Varadero, a town about 90 miles east of Havana. According to China's Xinhua News Agency, they came from all across the country, some from as far away as Santiago de Cuba and Holguin, to celebrate their bikes and each other.

"Once a year, we meet here as a way to cultivate friendship among Cubans who share the passion for having these motorcycles," said event organizer Abel Pez. "We also receive visitors who come from other countries to exchange with us."

Pez believes that there are around 170 Harley owners in Cuba, but not all the bikes on the island are in running condition. He figures that around 120 of the bikes are operational throughout the country, and the rest, well, you know, ran when parked. Much like the country's fleet of aging, mid-century Detroit iron, the paucity of new parts has made keeping the Harlistas' old bikes running quite a challenge. The Harlistas are nothing if not passionate though, and like their car-driving brethren they'll do just about anything to keep their machines on the road.

GUAJIRA GUANTANAMERA: How to Ride an Antique Harley-Davidson

"We live for the motorcycle. Everything we can do to make it beautiful, we do it. There are even times we have sacrificed personal comforts to buy something," said Raul Brito, the owner of a '49 model that he keeps running with spit, grit, and will.

While the majority of the rally's attendees are Cubans, some riders come from abroad as well. Canadian Steve Constable attended this year for the sixth time.

"I think this is a great initiative," said Constable. "The owners of these types of motorcycles know each other, can share together and help each other get what they need for their bikes, which is difficult in Cuba."

With Cuba's recent political upheavals and the general thawing of relations between the island nation and the United States, hopefully the Harlistas can finally get some parts for their old rides and keep them running for yet another 60 or 70 years.