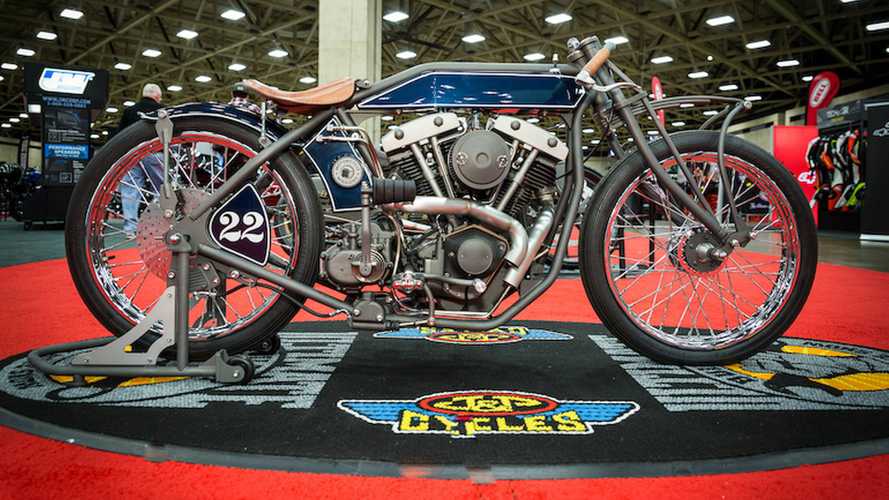 Every year, Progressive’s International Motorcycle Shows plays host to the J&P Cycles Ultimate Builder Custom Bike Show, the self-proclaimed world’s largest motorcycle builder competition. The competition features more than 350 one-off motorcycles from amateur and professional builders alike. On February 9-11, the 2017-2018 Championship round was held at IMS’s Chicago stop, where winners were crowned and more than $70K in prizes were awarded.

The customs are scattered around each of the annual show’s venues—in Chicago’s case, the Donald E. Stephens Convention Center—where they compete in one of four classes: Freestyle, Modified Harley, Modified Retro, and Custom Street. Competitors battle it out for the various category awards: People’s Choice Award, two Editor’s Choice awards, Best Bagger, Best Chopper, Best Dyna/FXR, The K and N Award, and the ultra prestigious Jeff Holt Tortilla Award. The ultimate goal is to be selected to move-on to the Championship round in Chicago - where $70,000 in cash and prizes are at stake. The judges evaluate each machine based on creativity, craftsmanship, and building ability. The panel of expert judges this year included Chris Callen, editor, Cycle Source Magazine; Chris Theis, custom builder and stuntman; Evan Favaro, custom builder; George Stinsman, custom builder; Max Ness of Arlen Ness Motorcycles; and Nick Beaulieu, custom builder and 2017 champion.

This year the official “King of the Builders” went to a custom from Motorcycle Missions - a nonprofit corporation founded by Krystal Hess that helps veterans and first responders with PTSD  and suicidal ideation “find hope and healing through motorcycles”. As part of Motorcycle Missions’ build mentorship program, eight veterans worked together to create the 2018 winning bike: “Porterhead” (this story's cover photo) a gorgeous Shovelhead-powered board track racer named after Leslie Porterfield who holds a handful of land-speed records.

“The J and P Cycles Ultimate Builder Custom Bike Show is one of the most competitive events in the custom motorcycle building industry," said Ultimate Builder Custom Bike Show Manager Jeff Najar. "Every year we are amazed at the craftsmanship, time, and hard work that goes into the entries in each city. We had an amazing championship round in Chicago this year that featured many breathtaking custom motorcycles, and we are very excited to crown Motorcycle Missions Veterans as the official 2018 ‘King of the Builders.’”

The rest of the 2018 championship winners and runner-ups were:

-Winner and 2018 King of the Builders: Motorcycle Missions Veterans

-Runner Up: Tyler Foster of Sikpipes

Other photos by Tim Huber