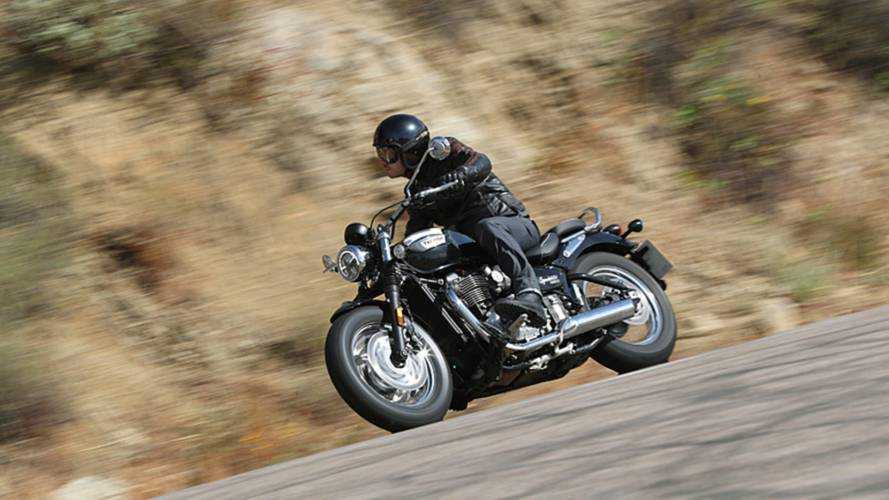 The Bonneville Bobber puts on its big boy pants and becomes a worthy successor to the old Speedmaster.

Before we talk about Triumph's all-new Bonneville Speedmaster, we must first spend a few moments thinking about the Bonneville Bobber. It's hard to argue with the Bobber. You sort of know exactly where you stand with it. It does it for you, or it doesn't. With a single seat, near zero luggage capacity, and pegs that touch the black stuff without much persuasion, it has a rather myopic take on life. It's probably not any good for track days, nor the best weapon for touring, but it's fantastic for a Sunday blast around the shires. Going by how many I see being ridden into and out of London during rush hour, it must be good at that too.

It's easy to see that the Bobber hit the mark for more people than it didn't. It hit for so many people that it caused Triumph to have to double the factory's output for the UK market alone. The exhaust note and torquey engine tune sound great, it handles far better than it has any right to, the build quality is decent, and the packaging super clever. About the only thing you could moan about was the compromised tank range, somewhat crashy rear suspension, and a front brake that required a fist full of digits to perform adequately. The looks speak for themselves to the point where I can fully believe a lot of Bobbers are being sold on visuals alone.

It comes as no real surprise then that Triumph reckoned it could use the Bobber's platform to breathe new life into the Speedmaster. You'd have to believe that a good number of potential customers out there loved the Bobber's looks, specification, and performance, but ultimately couldn't sign on the dotted line due to its compromises. The Bobber-based Speedmaster is here to address those compromises, and it does so wonderfully.

A Bobber in a different outfit?

This is all rather curious, because I vividly remember at the Bobber's launch in Madrid that Triumph said that the platform was designed for one seat only. Due to the (admittedly clever) packaging of the shock and its accompanying small amount of travel, modifying the chassis to accommodate two seats would be, quote, "hard to achieve". Yet, here's the Speedmaster with two seats! Apparently all Triumph had to do make it possible was to fit a sub-frame to the back of the chassis and swap out the rear shock for one with a dual-spring rate and top-out spring. Therefore the Speedmaster has 73mm of rear suspension travel, and the new shock unit is pre-load adjustable too. At the front, the non-adjustable forks are fitted with cartridge internals making them higher-spec than the Bobber's, but with the same 41mm diameter and 90mm of travel.

The Speedmaster's engine is the 1200cc T120 mill from the Bobber and Bobber Black in 'High Torque' tune, which trades more useful low down torque for top-end power. That means a healthy 78 lb-ft of torque at 4,000 RPM and 76 HP at 6,100 RPM available to your right hand through a 6 speed gear box with identical ratios to the Bobber. That's an impressive 42 percent more torque and 25 percent more power than the outgoing Speedmaster.

To slow all this new power down, the Speedmaster borrows the front brake and wheel setup from the Bobber Black. It has a 16-inch front wheel – down three inches from the Bobber Black's 19-inch unit – with a pair of 310mm rotors and floating two-piston Brembo calipers. The rear brake setup consists of a Nissin floating caliper gripping a single 255mm rotor. Anti-lock braking is, of course, standard, and the rubber is courtesy of Avon Tires.

In an effort to transform the riding position into more cruising oriented duties, the Speedmaster was fitted with beach bars, fat grips, and foot pegs relocated forward of the crankshaft. The tankis different too, with an increased capacity of just over three gallons. This makes the tank visually a bit bigger, and Triumph claims that those three or so gallons are enough for a 174 mile range (spoiler alert, they aren't).

Lastly, a number of visual changes complete the Bobber to Speedmaster transformation. Lots of chrome where matte finishes once sat, a nacelle for the LED headlight, a grab bar over the rear fender for a passenger or luggage to hold on to, and three new paint schemes – Jet Black, Cranberry Red, and Fusion White & Phantom Black with some gold and black pinstriping. Whichever you pick, it's only ever the tank that changes color.

Overall, is the Speedmaster just a Bobber in slightly different trim? Yes, it definitely is. Armed with Triumph's accessory catalog, you can almost turn a Speedmaster into a Bobber and vice versa. The only thing you can't do is fit the Bobber Black's 49mm forks to the Speedmaster (or the original Bobber for that matter) due to slight differences in rake and trail. There are a couple of "Inspiration Kits" available too, which add a pre-chosen set of options to the Speedmaster. One's called the Maverick, which amusingly does away with the swept back bars and pillion seat (basically forming a Bobber with forward foot pegs). The other, the Highway, adds panniers, a big screen, and a backrest for your passenger.

Triumph clearly sees the U.S. as the biggest market for the Speedmaster, and accordingly it chose San Diego as the location for the press launch. With the Pacific Coast Highway to test its cruising ability and mountain roads to make good use of, it seemed the perfect location. The test bikes were completely standard, although we were lucky enough to have an extra day's test where we stole a quick ride on a Speedmaster in "Maverick" trim.

Even before I'd turned a wheel I felt at home on the Speedmaster. The seat's a very friendly 27.7 inches tall –  about half an inch taller than the Bobber's – and the ignition switch is in the same place as the Bobber's down under your right thigh. The light clutch, the gentle throb of the exhaust note, and the immediate torque available from almost no RPMs whatsoever all came flooding back to the forefront of my mind along with a big grin.

the Speedmaster felt right at home out on the roads with the Pacific to my left and endless cafes to my right. The reach to the wide beach bars is short, and the angle your wrists sit at when holding on is very natural. Feet out in front, and with my  average 5'9" stature, the ride was dead comfy – not too far forward as to suffer hamstring discomfort nor too close to feel wrong. Everything seemed to make sense, and brake and clutch levers are adjustable as standard. Note that unlike the Bobber, the rider's seat can't be moved forwards or backwards.

Anyway, turn off the coastal road, hit the highways and life's still good. The T120 HT motor is nearly vibration free between 2,500-3,000 RPM. This is good for cruising at 50-75MPH in fifth and sixth gear, and only rarely will you need to shift down to find enough power to squirt past slower moving traffic. The beefy front brake setup doesn't disappoint either, and two digits are all that's required to stop as swiftly and sharply as you like. There's plenty of power in the rear brake too. I asked why Triumph fit Brembo to the front and Nissan to the back, and a rep commented that it was simply the combination that worked the best for them during testing. Make of that what you will, but personally I'd prefer a Brembo caliper on the back as well. At highway speeds the new tank is big enough to remove one of the Bobber's common complaints – it reduces air flowing to your gentlemanly bits, and as a result that department is left warmer and much more comfortable at speed (or in colder weather). All-day comfort? You bet.

The standard issue cruise control is brilliantly executed as well. It works in third gear or above between 30 and 100 MPH, and is dead simple to use. Press once to wake the system up, press again to activate. Press again to lower your speed in one mile-per-hour increments, and touch any control (brakes, throttle, clutch) to deactivate. While we're talking electronics, the Speedmaster has rain and road mode which delivers the same power via an altered throttle response, as well as switchable ABS and traction control.

Of course, the bit I'd been looking forward to was seeing if the Speedmaster could come up with the goods in the twisties, especially given the more relaxed fork rake and trail. While the twisties we found around Mount Palomar were not quite as gnarly as the roads we covered around Madrid on the Bobber, they were still more than technical enough for an assessment. It should not surprise you that the Speedmaster did a great job, even if it weighs slightly more than the Bobber at 540 lbs dry. Hero blobs were swiftly scraped away on the asphalt, and the wider front tire doesn't seem to have affected turn-in ability whatsoever. Compared to Harley-Davidson's Fat Bob with its similarly fat front tire, there's no hesitancy at all as you nudge the bars to get the Speedmaster pointed in the right direction.

I was blown away by how well the Bobber handled, and it appears the Speedmaster has inherited all of its ability. Second and third gear are the gears of choice in the twisties, with the engine anywhere between 4,000 and 6,000 RPM enabling swift progress between sharp corners. At these elevated RPMs you can definitely feel the two 270 degree offset pistons dancing up and down. Spend long enough in these gears while riding enthusiastically and some slight numbness will work its way into your hands through the handlebars. I don't think many Speedmaster riders will be doing quite what we were though – the kind of aggressive riding that ends up with not only pegs being ground away but the exhausts too. Oops!

On our 150-mile ride, the fuel warning light illuminated at the 100 mile mark and the onboard computer indicated I had a further 35 miles of range left at an average of 59.5MPG so far. Therefore, using the power of math, I'd happily say that Triumph's stated 174-mile range seems rather optimistic. 150 miles is more realistic for highway use, and 130 miles for combined use. The only slight disappointment I could volunteer is the same snatchy fueling low down in the revs. Roundabouts and slow speed maneuvers require you to cover the clutch to smooth out the on/off fueling, but in the scheme of things it's not a deal breaker.

Is this new Speedmaster a worthy replacement for the outgoing model? Definitely. Take an already very good bike – both technically and visually – make it a bit comfier, give it the ability to carry a pillion, brake harder, and travel further and you've got yet another winning formula from the boys and girls in Hinckley, England. The price isn't too unreasonable either, starting at $13,150 for the Jet Black model – $1,250 more than the standard Bobber – rising to $13,400 for the Cranberry Red, and finally $13,650 for Fusion White. It'll be in showrooms by early March, and you've got 10,000 miles from there to your first service.

Overall, the Bobber just grew up a little. If you were considering a Bobber but were put off by its characteristics, or none of the competition float your boat, then perhaps the Speedmaster is the bike for you.